Who’s on the DFL primary ballot?

Senate District 63 has only one incumbent, Rep. Emma Greenman of 63B, who was endorsed by acclamation.
Running for Senate to replace retiring Sen. Patricia Torres Ray is Zaynab Mohamed, who was also previously endorsed by Twin Cities DSA, among others. Mohamed was endorsed without major shenanigans. Nevertheless, she now has a primary opponent – Todd C. Scott, the son of former DFL chair Rick Scott.
The shenanigans were all around the endorsement battle for 63A, the seat held by retiring Rep. Jim Davnie. There were three candidates with a drop rule of 15% and the lowest candidate, a strong environmentalist named Kevin McDonald, dropped voluntarily when he got just slightly more than 15% on the first ballot. This left Samantha Sencer-Mura facing Yusra Arab, and this is where the trouble came in. In my view, Arab never had a shot at 60%, whereas Sencer-Mura was already within a few points on the second ballot, and crept a point or so closer on ballots three and four. Part one of the convention was recessed after 12 hours. 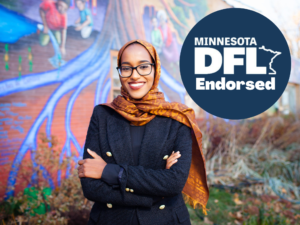 Part two of the convention, a month later, with two new co-chairs and major rules tweaks, was almost as bad, but Sencer-Mura was finally endorsed on the sixth ballot, after many of Arab’s delegates logged out in a futile attempt to break the quorum. Neither Arab nor McDonald nor any new challenger is running in the primary, so the Senate race is the only primary in SD 63.
Meanwhile, there is a situation next door in SD 62, where Omar Fateh is the incumbent. He was sworn in in January 2021 after defeating Jeff Hayden. Fateh is liked by his district and by progressive allies, including Twin Cities DSA which endorsed him in 2020. He is now under attack on several fronts. One was an attempt to tie him to the scandal about Feeding Our Future, a nonprofit that was supposed to channel federal grant money to food programs for children, and did so, but seemed to be taking in far more money than they could justify against charity and staff expenditures. The FBI suspects it of either fraud or money-laundering or both. This is a true scandal but there was really no connection to Omar Fateh. He received campaign contributions from 11 individuals with connections to Feeding Our Future (as did Jacob Frey and many other DFL politicians) but he returned them.
Another election fraud charge alleged that Fateh helped a nonprofit, Somali TV, get a grant, after Somali TV had run ads for his campaign. The original charge said they “endorsed” him, but they don’t endorse candidates. This kind of fizzled out when the Fateh campaign proved that the ad was paid for at the time.
The most harmful attack against Fateh centers around absentee ballots delivered by campaign volunteers, a practice which is permitted but highly regulated. Even if the irregularities alleged were proven, which they have not been, the total number of absentee ballots cast is lower than Fateh’s winning margin. But in the process of this investigation, a man named Musa Mohamed was convicted of perjury, and Fateh, it is alleged, denied he knew him. Musa Mohamed is Fateh’s brother-in-law. Fateh says he never denied knowing Mohamed.
Then it was discovered that Zaynab Mohamed is Musa’s sister and, therefore, Fateh’s sister-in-law. There’s nothing intrinsically wrong with any of these relationships. Musa is not running for office and Zaynab is in a different district from Omar Fateh.
Fateh is being challenged in the primary by Shaun Laden, who made the news leading the education support professional (ESP) chapter of the Minneapolis Federation of Teachers (MFT) in its historic strike this past March. Laden did not challenge Fateh at the endorsing convention but emerged just before filing closed. Laden is endorsed by Minnesota Rep. Sydney Jordan, Minneapolis Public Schools Directors Ira Jourdain and Kimberly Caprini, and former Minneapolis Park Board commissioner Londel French.