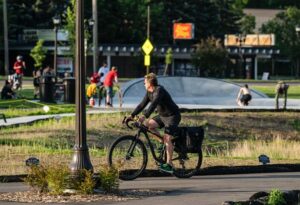 The development of Highland Bridge, the official name for the former Ford plant site on the banks of the Mississippi, is making massive strides toward completion this year. You can follow the progress through the dedicated website at highlandbridge.com, print out periodic progress reports and see videos and notices of opening events. It won’t be 100% complete for another year or two, but a few things are ready to see or open now.
In May, the very first opening occurred, for one of the four parks within the site. A friend of mine, Tom B., who works in St. Paul politics and government, is a big fan of the project, being one of its earliest activists. He wrote a touching Facebook post about the opening:
“Today I went to the ribbon cutting at the first park to open at Highland Bridge, the first parcel actually. It was put on my calendar as a Work Thing, and up until the moment I hit the elevators leaving City Hall I didn’t realize that it was a Me Thing. The ribbon cutting itself was exactly what you expect. [Council member] Chris Tolbert and [Mayor] Melvin Carter did a rah rah and shouted out all the big players, but both of them did an interesting thing where they lingered on thanking the community that stepped up and fought for that hunk of land in our neighborhood. It felt like a real acknowledgement of all the screaming and hollering we did when it was still The Ford Site. It felt validating.” 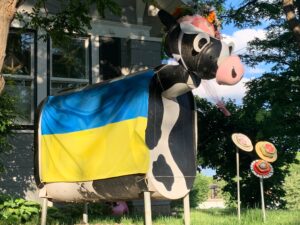 The four parks under the auspices of the city parks department are Gateway Park (the one mentioned above), Assembly Union Park, Uŋči Makhà Park and Míča Park.
• Gateway Park is so named because it’s right off the parkway coming from Minneapolis, serving as a gateway both to St. Paul and Highland Bridge. It contains walking paths, a skate trail, bench seating and game tables.
• Assembly Union Park is named in honor of the union workers at the Ford plant and is sited where the actual assembly plant was. This park will include pickleball courts, a dog park, an open lawn and restrooms.
• Uŋči Makhà Park means Grandmother Earth in the Dakota language. This is the largest park and is adjacent to Hidden Falls Regional Park at the southern end of the site. It will have an off-leash dog park, walking paths and nature play area, volleyball courts, a hammock area and a picnic shelter. A milestone late last year was the selection of a pair of Indigenous artists, Marlena Myles and Rory Wakemup, selected unanimously from 170 applicants to create an art installation for this park. The work is in progress now.
• Míča Park means Coyote in the Dakota language. This park will have a large open lawn, but also steep slopes, wetlands, and access to the Highland Bridge Community Gardens. This is the only park that has not begun construction yet.
• In addition to the four parks, there is a massive “commons” in the middle of the site which is 100% vehicular traffic-free and enriched by a large water feature. This parcel is mostly done so it can be viewed, although possibly not entered.
There has been a recent controversy over a late-breaking proposal from the University of St. Thomas to carve out a sizable piece for them to purchase for indoor and outdoor baseball/softball and an ice arena for their hockey team. There was huge pushback from neighborhood activists against this. Then, on July 6, the college announced it was dropping the hockey part and trying to prevail with the baseball/softball part. The proposed changes will be presented by city planner Mike Richardson at the Highland District Council’s community development committee meeting on July 19, and a public hearing on the required zoning and master plan amendments is scheduled for Aug. 5 before the city Planning Commission. Stay tuned. 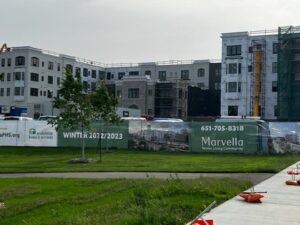 One thing I can’t help but notice in reading the progress reports from 2020 to the present is that almost all of the expected costs of owner-occupied housing have increased greatly over that period. And the main market-rate rental property, although started early on, is “on hold, due to rent control.” If still true (as recently as March 2022, it was reported that the market-rate rental development plans were still paused) that’s very disappointing. I need to talk to my St. Paul activist squad and see what the deal is.
One of the other things now completed are the market-rate, owner-occupied row housing. At least, the model sales units are complete, and people are touring them to buy their own units, some of which are still being built. If you think row houses sound like a working-class option, well, no, not exactly. In 2020, Ryan Companies, the developer that purchased the whole site initially and is selling off the parcels to various other stakeholders in line with the city-approved plan, predicted the row houses, which are four floors in height with three to four bedrooms, would carry initial prices of around $500,000. The spread across the various floor plans right now is between $680,000 and $801,000. Part of this is just inflation, but part is also the community acceptance of the Highland Bridge concept, and the perception of Highland Park as being an elite neighborhood in the inner cities. These homes are being developed and sold by Pulte Homes, which now owns that parcel.
There is also a market-rate senior rental housing option, named Marvella Senior Housing, owned and being built by Presbyterian Homes and Services. They have a rental office in nearby Highland Park and are taking applications now. And there are a variety of affordable rental options which are proceeding. Project for Pride in Living (PPL) is helming several of them, and Common Bond is the owner and in charge of another.

Cecil’s Deli has retail in front and sit-down in back.

Let’s talk about some of the existing factors that contribute to making Highland Bridge such a desirable near-future residence. We don’t know for sure what restaurants and amenities there will be in the development yet, beyond the fact that Lunds & Byerlys will be the retail anchor tenant for one of the mixed-use housing buildings now nearing completion. If a future Highland Bridge resident walked or biked up the gentle slope and across Ford Parkway, what would there be to eat or drink?
On Cleveland Avenue, just a couple of blocks north, there is a great coffee shop with food items as well. Quixotic Coffee features coffee drinks from a local roastery, as well as nitro cold brew, tea, kombucha and smoothies to drink and pastries to eat. (Before the pandemic they had sandwiches and such, and the website promises they will return, hopefully by mid-2022. Better call first if you’re wanting lunch.) They have a modern, chilled-out ambience and a small semi-private meeting room. 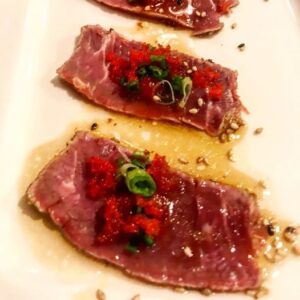 If you’re looking for full breakfast or lunch, a great option is Cecil’s Deli at 651 Cleveland Ave. They’re an old-school deli (founded by Cecil and Faye Glickman in 1949!), with items such as corned beef hash scrambled eggs with a toasted bagel, thick juicy Reuben sandwiches, and generously filled meaty cold sandwiches with bread choices like pumpernickel or kaiser rolls. For drinks, you can get all the usual things (excellent iced tea!) or Dr. Brown’s sodas, Henry Weinhard’s sodas, or house-made egg creams. Cecil’s also offers catering services – either box lunches or huge deli trays so guests can choose their own.
More in the mood for sushi, but wanting something fancier than Lunds? There is a sushi bar on Cleveland Avenue, too – Sakana – which is also a pan-Asian bistro with Japanese, Thai, Chinese and other favorites. They have everything from tom yum soup to fried rice to Kobe-style beef. Check out their Facebook page or order some contactless delivery.
If you prefer to cook at home, Highland Park has you covered there too. In addition to the aforementioned Lunds & Byerlys, you can get specialty foods from Von Hanson’s Meats, such as many different kinds of sausage (including wild game), and any individual cut you can name of any meat they carry, and even side dishes like garlic mashed potatoes or green bean casserole. They also offer a wild game processing service to Minnesota licensed hunters. They are a local chain with 23 stores in Minnesota and one in Arizona, and they offer online ordering and delivery. 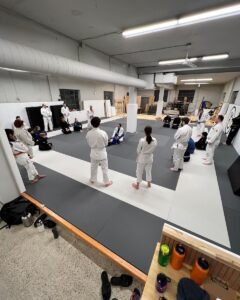 Other businesses and services to check out in Highland Park

Some other great amenities exist in Highland Park. Outside of the new development, the neighborhood was already rich in parklands, has desirable public schools, a great library, and a unionized Half Price Books. It has a good mix of retail stores, some of which will be either moving to or replicating within Highland Bridge.
There is also a highly rated parochial school, Highland Catholic School (HCS), a K-8 school associated with the parish church of Lumen Christi. Outside of the school year, HCS has some wonderful summer camps and summer school special offerings. Check out their Facebook page for a glimpse.
Another extracurricular school for both kids and adults is the combined Brazilian Jiu-Jitsu and Japanese Judo school Grappler Station. Although founded by a small band of Jiu Jitsu/Judo enthusiasts in 2018, they just moved into their permanent home at 2015 Ford Pkwy. this spring, and expanded their classes offerings accordingly.