Who is on the primary ballot? 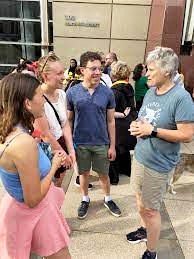 On your primary ballot, no matter where you live in Minnesota, you will see several selections for top state offices: governor and lieutenant governor (they run as a team), secretary of state, and attorney general. All of these positions are held by DFL incumbents who are running for re-election in 2022.
Incumbent DFL team Gov. Tim Walz and Lt. Gov. Peggy Flanagan are opposed by Ole Savior and Julia M. Parker. I know next to nothing about them, but they don’t really have a chance. There is no serious opposition to Scott Jensen in the Republican primary (sorry to my dear friends Bob Carney, Jr. and Captain Jack Sparrow, but it’s true). Bob has clued me in on just how awful Scott Jensen is. He is a longtime MD in family practice, and he opposes all abortions, with no exceptions for rape, incest, ectopic pregnancy or threat to the life of the person carrying the fetus. Apparently in his family practice he has never had a patient who even asked about an abortion. This man is more dangerous than Trump. I am as disappointed as the next person in the Walz-Flanagan team, but by God I’m voting for them.
For secretary of state and attorney general, there are lots of challengers, not one of whom is running in good faith. Unquestionably, you should vote for the incumbents – Steve Simon for secretary of state and Keith Ellison for attorney general.

All U.S. congressional representatives are running because they have two-year terms. U.S. senators have staggered six-year terms, but neither Minnesota senator is up for reelection this year.
In Congressional District 5, which basically covers Minneapolis, we have been happily represented by Ilhan Omar since 2018. She was challenged in the primary by Don Samuels, a former Minneapolis council member and a former Minneapolis school board member, who is becoming something of a perennial candidate. Don Samuels refused to abide by the endorsement. He brought a lot of allies to the CD5 convention, but nevertheless Omar won a third endorsement on the second ballot.
The CD5 section of the primary ballot shows five DFL candidates and three Republicans. In addition to Samuels and Omar, the DFL candidates include Albert Ross, AJ Kern and Nate Schluter. Many of the centrist DFLers who are opposing Omar at this time are the same people who stand up and give impassioned speeches about respecting the endorsement and accuse progressives of not respecting it. This is the real scandal. What happened to the late Fritz Mondale’s lauded “DFL decency”?
Rep. Omar is a stellar congresswoman, in my estimation. She is subject to constant attacks from all corners (except from progressives in her district) and even death threats. I believe we need to rally round and return another overwhelmingly positive vote for Omar.

At the Minneapolis DFL convention, the Minneapolis Federation of Teachers was running a slate for endorsement for the school board. It was a hard-fought race, but all the slate members won endorsement. I support all the DFL-endorsed candidates. They are Collin Beachy and KerryJo Felder for the two at-large seats, and Lori Norvell for District 5, Fathia Feerayarre for District 3, and Mary Jo McCollow for District 1.

If, like me, you are fortunate enough to live in Hennepin County, we have several juicy races with good candidates, which have for the most part been DFL-endorsed. I would urge you to vote for DFL-endorsed Mary Moriarty, a former public defender, for county attorney and for DFL-endorsed Dawanna Witt for sheriff (who I believe will be the first WOC sheriff in Minnesota if she is elected).