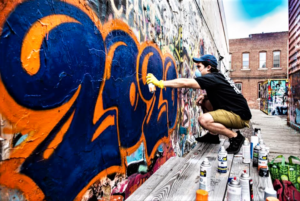 Graffiti is a polarizing issue. Some regard it as art that should be preserved, perhaps even in a museum, like Banksy, whose work was recently on display in North Minneapolis and who remains unidentified. It is said that he remains unidentified to protect himself from authorities who may charge him with the crime of graffiti. It is estimated that he is now worth 50 million British pounds. Others regard graffiti as vandalism, a crime punishable by law. Several business owners on East Lake Street have shared with me that they have a weekly budget for removing graffiti from their walls, windows, etc. I am not thrilled when I find my garage tagged and have to paint over it (city ordinance). The city of Minneapolis regards graffiti as a crime (Statute 617.90) and defines it as “Unauthorized markings of paint, dye or similar substances, or the unauthorized etchings or scratching of surfaces of such real or personal property any of which markings, scratching or etching is visible from premises that are open to the public.” Public properties and owners of private properties can bring legal action and damages may be recovered up to three times the cost of restoring the damage. Or a defendant may be ordered to restore the property. The parents of underage offenders can be held responsible (Statute 540.18). In 2016 the Minneapolis Graffiti Abatement and Enforcement program spent $539,420 on prevention, removal and enforcement. The city has four levels of conviction, considering factors such as damage, risk and value. Sentences can involve both fines (up to $10,000) and jail time (up to five years) and are most often charged as misdemeanors.

Since 2020, Minneapolis has become more familiar with graffiti, murals and tagging. The murder of George Floyd, followed by civil unrest, seems to have created a need for residents to express themselves. The portrait of George Floyd at Chicago and 38th Street has been seen all across the country and beyond. The image symbolizes a variety of themes including justice – especially racial justice – police brutality, legal and human matters, such as compassion and humanitarianism.
Symbolism and abstraction have been around for a very long time, as has the humanneed for self-expression. Primitive peoples drew on cave walls and rocks. Anthropologists have identified images created by Neanderthals and Denisovans as far back as 64,000 years ago in the caves of La Pasiega, Maltravieso and Ardales of Spain. These cave dwellers depicted images of humans and animals (horses, deer, bulls), the beauty around them, and the hunting activities which dominated their lives. These images demonstrated fantastic imagination, such as unicorns. The oldest known cave painting is of a life-size wild pig depicted in Indonesia 45,500 years ago. Anthropologists summarize that these early cave dwellers wanted to express feelings and depict their lives and daily activities. Perhaps it was to remind them of something, to remember something or someone. It is believed via the study of hieroglyvics and petroglyphs that such images were precursors to what we now know as language. The oldest prehistoric art was not found in a cave, however, but rather on a rock in Africa, estimated to be 73,000 years old. Alistair W.G. Pike, the head of archaeological sciences at the University of Southampton in the U.K., points out the common use of symbolism and the spiritual significance of these ancient images. Even in North America into the 19th century, cave paintings have been identified in Kentucky, Tennessee, Alabama, and Georgia. Fortunately, caves are perfect homes for these paintings, preserving them and allowing us to study them so many years later. 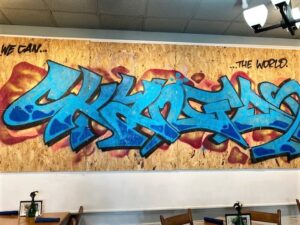 We can change the world

“Art should comfort the disturbed and disturb the comfortable.” – Banksy

Miguel Quiñones grew up in Southwest Chicago, the son of Mexican immigrants. He is now a graduate student at the University of Minnesota. Miguel remembers how graffiti spoke to him at an early age: “It was colorful and I could relate to it. It was the visual art of myneighborhood.” He started drawing in the styles he saw around him. He had a close friend who was experimenting with photography. Together they explored sights heavy with graffiti and took photos. Miguel says, “You don’t have to be rich or go to art school, all you need is some spray paint.” They were careful about where they put their projects, intending to avoid criminal charges, “so we only worked sites already full of graffiti and off the beaten path such as industrial sites and abandoned buildings,” he said.They then discovered an alley in their neighborhood between two buildings that seemed to be a “laboratory” for graffiti. It became Miguel’s go-to place. There he could observe others’ work and add his own.
Miguel grew accustomed to his work being painted over by others and came to regard his alley as a place of “stories and expression – a living, breathing evolution – a voice.” Graffiti is often the voice of rebellion, social commentary and politics. It has been described as the voice of the unheard and disenfranchised. Miguel points out that originally hip-hop was regarded as noise and overlooked, but it evolved into a billion-dollar industry, its worth estimated at $15.7 billion in 2016 with a projected growth rate of $4.08 billion year by year. He further points out that sometimes hip-hop and graffiti become entrances to the arts, maybe the only entrance for some low-income urban youth.
There are many types and styles of graffiti such as bombing, burning, tagging, letters, character and gang. Styles include wild, stencil, sticker, slap, blockbuster and so on. Cities known for their graffiti include New York, Mexico City, Los Angeles, Berlin, Prague, Melbourne, San Francisco, Barcelona, Buenos Aires and Delhi. At @149st you can find documented history of New York City’s subway graffiti. Hardcore graffiti artists pride themselves on the risk they take, looking down on those who ask for permission. Well-known graffiti artists include Lady Pink, Vhils, Toxic, Keith Haring and Seen (Richard Mirando), who is considered the godfather of graffiti. If you Google Minneapolis graffiti you will find 34 images, with 28 of the artists identified and 6 not identified. Graffiti supply sites offer 11 categories of products and 17 different brands.

If you are a fan of Greek food you probably know about Christos award-winning restaurant and catering, in the Whittier neighborhood since 1988. Owned by Gus Parpas, he and his staff bring delicious, authentic Greek dishes with specialties from the island of Cyprus, ambience of an island taverna, reasonable prices and quality service to their customers.
During the riots of 2020, as anger and frustrations grew in the aftermath of the murder of George Floyd, Christos, like many businesses, boarded up their property against the violence and destruction that was taking place. As protesters marched down Nicollet Avenue, a young man entered the restaurant and asked to see the manager. When Carol Parpas met with him he asked if he could paint on the plywood boards covering the windows. He seemed polite and determined. Carol gave permission and off he went. When he finished his creation he returned and asked if Carol would like to see it. She was impressed. They chatted; he was offered a meal and then went on his way.
The protests on Nicollet Avenue were peaceful and damage was minimal. The boards were taken down and a contractor moved them to a storage room intending to repurpose them at a later date. One of the boards was eventually used for another project, then returned, but in two pieces. Fortunately the art work was not damaged. For the next year and a half the boards collected dust until Gus came across them while rummaging for something else. He removed the boards, set them up against a wall and admired the work for some time. He felt that the artist had conveyed the anguish caused by George Floyd’s murder at the hands of former MPD officers. Gus also saw hope in the artist’s work, a colorful, turbulent, compelling piece. Rather than letting it languish in a storage room it was decided that the art should be shared. It now hangs on the back wall of the restaurant’s dining room, raw and unvarnished, a reminder of the issues unleashed during that stormy time and our duty to continue to address them. The graffiti brightens the room and is a conversation piece, a history lesson. In spite of a photo taken of the artist at work at Christos, he has not been identified and remains a mystery.
We are social beings. Whether an image appears in a gallery, a cave, a building, an office, a living room or on the street, it’s clear that we humans have a need to express ourselves and share our experiences.