[Ed Felien’s remarks to the Park Board on July 20]

In a promotional video having something to do with the Hiawatha Plan, Michael Schroeder is shown saying, “My mission is to de-Wirthify the Minneapolis Park System.” The crown jewel of his plan is to turn the Hiawatha Golf Course into a swamp. It was almost a swamp a hundred years ago before Theodore Wirth dredged Rice Lake to a depth of 33 feet. Most of Minneapolis was a swamp a hundred years ago. Powderhorn Park was a swamp that crossed Lake Street to 28th Street. But swamps smell bad. People wanted to drain the swamps so they could build homes and parks and playgrounds and golf courses.
But there is something swampy about the fixed determination of Park Board planners. Something about it smells. It’s already cost the taxpayers over a million dollars in planning, and all it has produced is a stinking mess. 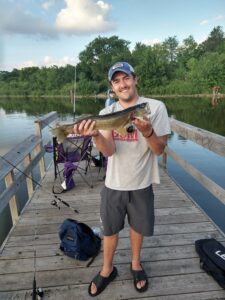 Jon Spurgeon with fish caught and
released at Lake Hiawatha

It’s time to de-Schroederize the plan for Hiawatha.
The justification for the Schroeder plan is the amount of pumping done to keep water off the low land next to the lake. He told everyone at public meetings that the amount they were pumping was illegal. That was a stinking lie.
What is illegal is the dam/weir at 27th Avenue that is holding back five feet of water. You need a permit from the DNR to back up water into a wetland, and the area around Lake Hiawatha and Lake Nokomis and Solomon Park is a wetland. The peat soil is like a sponge soaking up water and swampifying the whole area. Take down the dam/weir, dredge the creek so the water runs under the sanitary sewer lines, and you lower the lake level by five feet and drain the swamp. You would eliminate the collapsing infrastructure around Lake Nokomis, end flooded basements and eliminate pumping.
State regulations say, “Dams not subject to the dam safety rules will still require state and federal permits if they involve filling of public waters or wetlands.”
It shouldn’t take a writ of mandamus and a district court order to force the Park Board to follow the law and do what’s best for our parks.
We need to flocculate Minnehaha Creek before it gets to Lake Hiawatha. Like Richfield at Taft Lake, we need a system to filter the water and take out the phosphorus that is making us sick. And we need a flocculation system and a grit chamber filtering phosphorus and trash out of the city’s storm sewer system that dumps poison and trash into Lake Hiawatha.
We all want the best for our parks. We all want to get past this stinking mess we keep coming back to. But first, we’re probably going to have to find a strong de-Schroederant.