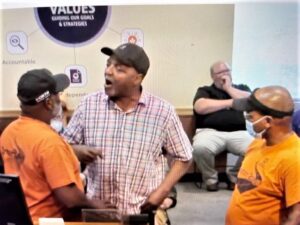 Al Flowers had to be pushed off the microphone at the July 20 MPRB Planning
Committee meeting.

On July 20, the Planning Committee of the Minneapolis Park and Recreation Board started the process of reconsidering the Hiawatha Golf Course Master Plan for the fourth time. This time Park Board President Meg Forney wasn’t going to let this initial vote fail, so her first act of the night was to appoint herself to the planning committee so she could personally vote to pass the resolution.
During the public comment period, quite an array of comments was given about the plan.
The lengthiest was by Al Flowers, who compared the Park Board to the current U.S. Supreme Court. He said that the Supreme Court has just taken away a long-standing constitutional right. In a like manner, the Park Board is destroying a 90-year-old Black institution in the city of Minneapolis. Flowers also begged Superintendent Al Bangoura to stand up with the Black community in imploring the board to retain the 18-hole Hiawatha Golf Course.
One person asked the board to stop the racist tactic of pitting minority groups against each other (in this case, Blacks and Native Americans) and another woman asked the board to give the Hiawatha Golf Course property back to Native Americans. I found the latter rather ironic since, the next morning, I saw a Native American golfing in the group behind me at Hiawatha Golf Course. Maybe the Park Board should give the property back to the Native American community and the golf course could be added to the many golf courses in Minnesota owned and operated by Native Americans. Then we could still have our 18-hole golf course, and it would likely be better maintained.
I talked about the history of racism in the city of Minneapolis; how my grade school of 600 kids was all white because of racial covenants; how the building of I-35W destroyed part of the Black community in South Minneapolis; and how Solomon Park, named after the first Black Park Board Commissioner, Ed Solomon, is a disgrace. Now, this heavily white Park Board wants to destroy Hiawatha Golf Course, another Black institution in the city of Minneapolis.
With the help of Park Board President Meg Forney, the Planning Committee voted to pursue the path of destruction of another Black institution in this city. The racist legacy of Minneapolis, implemented by white privilege, continues.
There will be a public hearing on the Hiawatha Master Plan at the August 3 Park Board meeting.