A Minnesota tourist in Cuba

In the sweltering hours of a late summer’s evening, airplanes touch down in Havana’s José Martí International Airport and pull into gates, full of tourists and expatriates returning to see family. Past passport security and baggage claim, cigarette-smoking airport employees direct recent arrivals into the currency exchange boxes and vendors hock bottles of warm beer and children’s juice pouches. José Martí International, a multi-terminal airport, is named after a Spanish-citizen Cuban-denizen poet and long-respected political prisoner and soldier of the third war for Cuban independence against Spain (1895-1898). As it turns out, this airport is the only port of entry for Americans. Some of the airlines that arrive at this particular airport include Southwest, American, Copa and JetBlue. Dispersed among Terminals 2 and 3, these airlines bring Americans from New York, Miami, Fort Lauderdale and Houston in to be asked, “Do you want your passport stamped?”
Since the airport is located a half hour’s drive from central Havana, the only real option a U.S. citizen has is to travel by taxi. 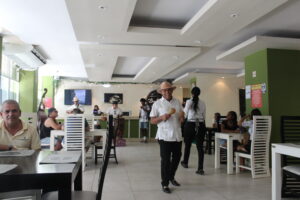