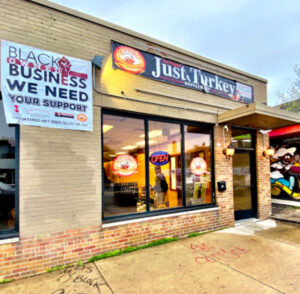 George Floyd Square is settling into a place with an identity, at least that’s how it feels to this writer, making pilgrimages there every other month or so, not as a tourist, or a penitent, but as an investigator. I have to say, I feel safe there. I feel welcome there.
My most recent sojourn found me in the Forreal Coffeehouse. Drinking coffee, a decaf oat milk latte to be exact. I had recently read about this business and Billy Jones, the owner, in two separate places. The most thorough was a profile of Jones and the business in the Minneapolis/St. Paul Business Journal, and the other was in a Racket (a local online newspaper at racketmn.com) piece about a recent wave of BIPOC-owned coffee shop start-ups.
And there Jones was, in the flesh, making a coffee drink. Forreal is the real deal, striving to be and largely succeeding as a community hub, a gathering place, and an anchor for this new community at George Floyd Square. Their coffee is very good too.
While I was at GFS I also dropped in to see a pop-up exhibit of photographs. This was in the gallery owned by Wing Young Huie, whose own photographs also hang on the walls. But spread out on a table and propped up on easels were dozens of powerful pieces of photojournalism from KingDemetrius Pendleton, an independent photojournalist who has recently self-published a book called “The Movement Never Stops.” 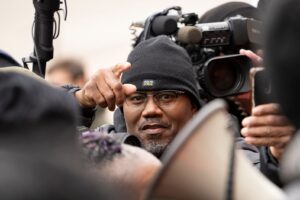 This exhibit is based on one Pendleton produced last May. If, like me, you didn’t know about Pendleton, read this piece by Unicorn Riot celebrating his work and what led him to become a journalist in his mid-40s and earn a photography degree at the age of 50. unicornriot.ninja/2022/kingdemetrius-pendleton-celebrated/
They don’t have much food at Forreal Coffeehouse, but there are two good places to buy food at GFS. One is Just Turkey. Like the name says, they sell meals based only on turkey, but that can cover a lot of ground. Offerings include turkey BBQ sandwiches, burgers, ribs, chili, lasagna, links, salads, tacos and wraps. Just Turkey came to GFS in the fall of 2020 and is run by business partners Sam Willis and Cedric Steele.
Next door to Just Turkey is Smoke in the Pit, which has been around since 1998. It’s one of the most popular barbecue and soul food destinations in Minneapolis. Highly rated by customers on Facebook, Yelp and Google, Smoke in the Pit serves BBQ beef or pork or chicken wings, as well as fried wings and fried catfish. Lunch orders come with fries, while dinner orders additionally include a drink and another side such as candied yams, collards or fried spaghetti.
GFS has been missing Dragon Wok, which originally was planning to return at some point, but now apparently is not. Instead, a 5-year-old catering firm called Chopped & Served is planning to move into the space. Chopped & Served is run by St. Louis Park-raised Imani Jackson and offers her own style of cooking called “Blewish Cuisine,” which reflects her combined Black and Jewish heritage. Besides providing catering for all manner of corporate and special events, Chopped & Served serves the community by offering a monthly sponsorship subscription where folks can sign up to help feed the community, one family at a time. Check out their website at choppedandserved.com to learn more ways you can help. 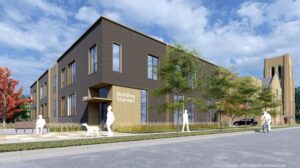 Calvary Lutheran Church at 3901 Chicago Ave. has been a strong participant in the transformation of GFS. Now they are planning to contribute even more of something really needed in south Minneapolis – affordable housing. In June, the Minneapolis/St. Paul Business Journal reported that a partnership of the church with Trellis Co., which manages Spirit on Lake as well as many other housing developments, is seeking planning permission to build 41 units of housing in an extension of the church into its present parking lot.

Other food and drink spots on Chicago Avenue

There are several other interesting places to eat and drink along Chicago Avenue to the north of GFS. One of the neighborhood’s well-loved spots is Jakeeno’s at 36th Street and Chicago, a long-standing business selling Italian favorites like pizza and spaghetti. Jakeeno’s has been family-owned and operated since 1975. Currently still doing takeout and delivery only, with online or phone ordering, it remains popular due to the high quality and reasonable prices. Jakeeno’s opens at 3 p.m. Wednesday through Sunday. 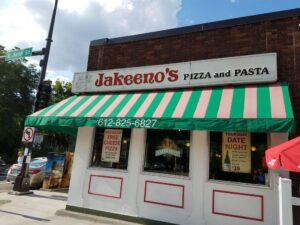 A bit farther north, at 32nd Street, is one of my favorite comfort food places, Modern Times. The office home of this newspaper until just this month, Modern Times the restaurant is a great hangout whether on the sidewalk patio or inside with its old-school funky diner interior. They have a broad selection of vegan and vegetarian foods, so large now that they have instituted a separate vegan menu to make ordering faster for vegan diners. And also, though you won’t see them on the menu, there are often donuts!
A bit farther yet, at 1922 Chicago Ave., is the Daily Cairo Grill. Though advertised as an Egyptian restaurant, many of the offerings are clearly either Somali (goat with spaghetti, bananas with almost everything) or Ethiopian (various foods with injera for breakfast). The buzz around town is that they make the best sambusas. 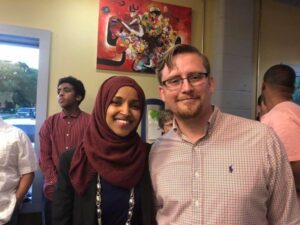 Getting groceries on Chicago Avenue

Chicago Avenue north of GFS does have some places to get groceries. At 721 Washington Ave. downtown, just off of Chicago, there is a Trader Joe’s that I have checked out and approved. Another good place, just the size of a convenience store (in fact it was one back in the day) is the Elliot Park Grocery at the corner of 16th and Chicago. Don’t let its appearance fool you, they have real food there, including ethnic specialties.
In the Powderhorn neighborhood, there is Southside Food and Deli at 3300 Chicago Ave. In addition to the normal corner grocery items, you can get a hot lunch there – sandwiches, wings, shrimp baskets and more. You can even get it delivered by DoorDash. 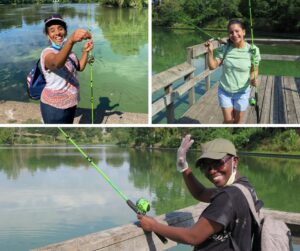 There are a number of service organizations that make their home on Chicago Avenue. We’ll highlight just two of them. The first is Our Saviour’s Community Services (OSCS). Although it started as a mission of Our Saviour’s Lutheran Church at 24th and Chicago, OSCS became independent and incorporated as a non-religious nonprofit. The organization has two projects – Our Saviour’s Housing at 2219 Chicago Ave. and the English Learning Center, at 2315 Chicago Ave. Our Saviour’s Housing operates a small emergency shelter and a larger scattered-site permanent supportive housing program.
The English Learning Center, although focused on language teaching, is a more holistic service to help a wide variety of people who are immigrants or refugees learn other skills to navigate their new environment, as well as English.
The other service organization is Avivo, which is mainly known for addiction treatment and chemical health services, but also is involved in the work of trying to end homelessness. Avivo is a fairly recent name, but the organization has been in operation since 1960. They have locations all over the Twin Cities and in St. Cloud, but two of their largest Minneapolis facilities are on Chicago Avenue. 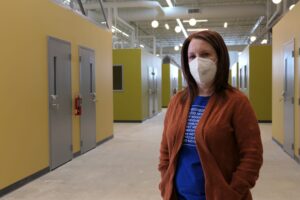 Recently Avivo has been in the news because of their “tiny house” project, Avivo Village. This is a fairly new facility (it opened in March of 2021) in Minneapolis’s North Loop which consists of 100 tiny houses built indoors inside a large warehouse building. The village provides transitional housing that is stable and secure with 24-hour wraparound services to help residents move on to more permanent housing.