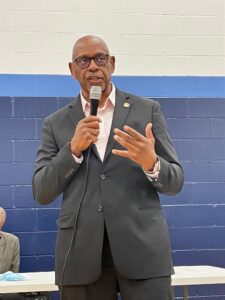 The Commissioner of Public Safety is a new position created to integrate five departments in the city of Minneapolis: Fire, Police, Emergency, 911 and Neighborhood Safety (formerly known as the Office of Violence Protection). The position carries a salary greater than the mayor’s or the governor’s. The goals of the position include improving policing, expanding community safety and streamlining practices with respect to 911. Mayor Frey identified and nominated Dr. Cedric Alexander, stating: “Alexander’s qualifications, experience, and vision uniquely aligned with this opportunity to reshape Minneapolis government and public safety.”
Community activists have expressed mixed feelings about the changes. Nekima Levy Armstrong approves while KG Wilson does not, namely because he would prefer a native who has history in Minneapolis, that is, an insider who knows the city, its history and is highly invested in outcomes. The other side of this disagreement is that an outsider comes with fresh eyes and perhaps ideas and skills that have not been tapped in the past in Minneapolis.
The Aug. 2 City Council meeting was largely about vetting Alexander. The result of the vote was eight in favor, two against and two abstaining. With seven yes votes required, Alexander was confirmed on Thursday, Aug. 4.
Questions for Alexander from the council and residents who signed up to speak revolved around issues related to gun violence, prevention of violence, policing, racial justice, accountability, youth, change/reformation and working with grassroots organizations, etc. The overriding question seemed to be, “What do you bring to the table and how will you do things differently to get results?” When Jason Chavez, 9th Ward City Council member pointed out to the new commissioner that boots were needed on the ground, the commissioner replied, “I have boots.” Commissioner Alexander views himself as a change agent and believes that he is the right person for the job. “It is the right time for change, time to move on from George Floyd.”
Alexander has an impressive near-40-year-career in public service including Deputy Chief Operations Officer of Public Safety, DeKalb County, Ga.; Federal Security Director, Department of Homeland Security TSA, Dallas/Fort Worth; Deputy Commissioner, New York State Division of Criminal Justice; Police Chief, Rochester, N.Y.; Deputy Sheriff, Orange County, Fla.; and Officer and Detective, Miami-Dade County, Fla.
In addition he served on President Obama’s task force on 21st-century policing, was a faculty member in the Department of Psychiatry at the University of Rochester’s Medical Center as well as author of “The New Guardians, Policing in America’s Communities for the 21st Century.” He received a B.A. and M.A. from St. Thomas University in Miami and completed his doctorate degree at Wright State University in Ohio.

The new commissioner states that his goal is to integrate the five departments reporting to him in order to create a more strategic approach versus each department standing alone as separate silos, unconnected. Another analogy might be a completed patchwork quilt sewn together rather than a collection of separate pieces. The end goal is improving public safety overall. Rather than viewing policing as a stand-alone function, Alexander views it as part of a larger umbrella designed to service a wider set of community needs. “The police do not need to be involved in getting cats out of trees, that’s for someone else to do,” he said. In the 3rd Precinct the number one call to 911 involves pets. In theory, by narrowing the role of the police force they will be freed up to focus on critical issues and provide shorter response times for people in need.
Alexander believes in goals, achievement of goals and accountability. He favors programs that are preventative and restorative, not reactionary. He views the MPD as needing leadership and trust-building both within the department and with the community it serves. Alexander points out that the five leaders of the departments will need to adapt to changes, to embrace cultural change and reformation, and to build relationships and accept new challenges. He further stated that his first priority is to work with the five department heads to improve operational emergency plans to be executed in the event of an infrastructure failure (e.g., a bridge going down), fire, civil unrest/riots and weather-related disasters.

On Aug. 16, Commissioner Alexander’s seventh day on the job, he and representatives from the 3rd and 5th Precincts (Inspectors Gomez and Blackwell), 911, Office of Violence Prevention, Canopy Mental Health & Consulting, and human trafficking prevention met with community members at the Pearl Community Center.Ward 11 Council Member Emily Koski introduced the new commissioner to the approximately 100 people in attendance and led the meeting. Each representative gave a brief presentation of their role and challenges.
Commissioner Alexander began by sharing some personal information: he is from the deep South and has nearly 40 years of work experience. He is divorced and was caring for his aging mother until he lost her earlier this year.
Alexander stressed the need for the community to be involved and on board with the new approach and pointed out that there is a lot to do. He reminded us of the severely understaffed police department: “Recruiting is difficult because many younger people are finding other things to do. We need to get creative in our approach to recruiting.” He also said the city needs to look deeper into potential police officers’ backgrounds, including their social media, to make sure they’re getting “the very best.” Seeking out the very best takes time, standards will not be relaxed. He shared that the 5th Precinct currently has 18 recruits for a September start. “Becoming an officer is a lengthy process, not everyone makes it through,” Alexander said.

Josh Peterson, Interim Director of the Office of Violence Prevention (now called Neighborhood Safety) introduced the concept of violence as a public health issue, a complex disease requiring complex solutions. The work of his group must balance short term goals with long term ones, relying on research. Some of the programs his group participates in include working with hospitals (Next Step) and with a group made up of police, social workers and community members (GVI).There is also a Violence Prevention Fund which can be applied for via a Request for Proposal (RFP). This fund supports programs designed to build skills and provides training in areas such as de-escalation, emergency procedures and working with the LGBT community (Spotlight).
The commissioner pointed out that 50% of guns used in committing crimes are stolen, often from cars. He will be focusing on reducing gun violence and robberies, pointing out that auto theft is up. When asked why he thinks this is he replied, “Kids are out of school, gas prices are up, and the economy is not strong.”

Jennifer Geiselhart, 911 Operations Manager, shared that in 2021 her group took 500,000 calls. She said that emergencies take priority but encouraged people to call 911 when appropriate because the pattern of the calls is studied and determines where and how resources are directed. All calls are important in order to get a true picture of community needs and issues. Geiselhart also pointed out the importance of knowing your location when dialing 911 because 90% of calls come in from wireless phones, making it nearly impossible to trace them.

Marisa Stevenson, Program Supervisor and Psychotherapist, described how her program works with emergency responders on voluntary crisis interventions. She is a mandated reporter.

Shunu Shrestha, senior advisor for human trafficking prevention, described how the parameters of her work includes not only sex trafficking but also labor trafficking. She originally focused on youth and then expanded. Shunu described this work as being at the intersection of health, violence and civil rights. With respect to creative approaches and training she gives the example 0f how a housing inspector can be trained to identify victims of trafficking, as can others who may come in contact with victims.

Commissioner Alexander addressed the growing need and use of technology to fight crime, such as facial recognition, license plate readers, shot spotter and drones. While realizing that this is a controversial subject given 4th Amendment rights and the possibility of technology working against certain groups and individuals, he stated that it is here to stay. Alexander acknowledged the fear and resistance (they may be spying on me!) but believes that education and communication are the keys. “The community needs to know what it is, how and why it is being used and the beneficial outcome in order to accept it.”

The new commissioner closed by talking about why crime exists and is growing, about understanding the roots of crime in order to prevent it. He described the roots of crime as being related to health care, education, economics and employment. When our communities are unhealthy, uneducated, unemployed and living in a weak economy, crime rises. Alexander stated his commitment to the vulnerable and victims – children and youth, the elderly, women, the disabled and underprivileged – and the city’s responsibility to protect them.He pointed out the need for compassion, saying, “Without compassion it is unlikely that these root causes will be properly addressed.” He also stressed that compassion does not eliminate the need to hold people accountable.
In early August, the Star Tribune published several pieces introducing and highlighting Alexander. Of the approximately 300 comments from readers in response, most were negative, cynical and skeptical. There seems to be a collective view that this is just another expensive layer of governmental bureaucracy to hide behind and that expecting one man to change what’s developed over many years in Minneapolis is unrealistic. Commenters repeatedly suggested that the high salary be used to hire more cops. Another reader who’d “done the math” estimated that this would cover the hiring of three cops (if there were qualified candidates who want to be cops). Another example of the pessimism and hopelessness: “This is like re-arranging the deck chairs on the Titanic.” The new position was repeatedly described as window-dressing.
A minority of readers pointed out Alexander’s impressive credentials and experience, pleading that the city give him a chance. One commenter asked, “Is he guilty until proven innocent?” And another wrote, “Culture change moves like a shifting continent, slowly, be patient.”
Clearly, for some, their patience is running out. The new commissioner believes that safety in the city can only be achieved with the involvement of the communities. If the reader comments are indicative of the public view, there is a big challenge ahead. Then again, maybe these comments are simply representative of a minority seeking an outlet for their beefs. Stay tuned.