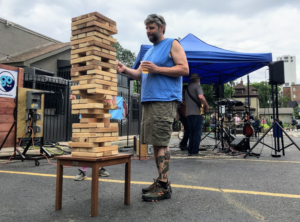 The Minneapolis neighborhood celebration known as Open Streets will have its final festival for 2022 with Open Streets Minnehaha, in the Longfellow neighborhood on Oct. 1 from 11 a.m. until 4:30 p.m. The street will be closed to all motor vehicle traffic between East Lake Street and East 46th Street, but open to pedestrians, bikes, skateboards and skaters. The philosophy behind Open Streets is to encourage people to explore their communities in a whole new way.
Visitors can spend time wandering the street to meet with local businesses and restaurants, with music and dance events to entertain everyone from kids to senior citizens. Dogs are welcome, too. You might even have a chance to talk with candidates running in Minnesota’s November election. There will be dozens of booths including the following:

Mactír Academy of Irish Dance (also known as the Wolfpack) 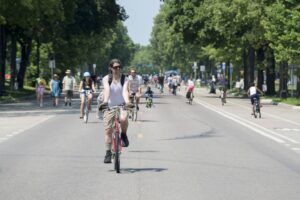 Mactír Academy of Irish Dance gets its name from the Irish word for wolf, as well as the name of the studio’s founder, Emily Wolff. She believes that Irish dance can help everyone develop skills that will benefit them for the rest of their lives. The studio has participated in Open Streets Minnehaha since moving into 3715 Minnehaha Ave. five years ago.
“We’re going to have short performances and after that willbe doing short classes,” Wolff said. “You don’t need special shoes or special clothes. We’ll go through the fundamentals – how to hold your arms, where to put your feet and your posture. We’ll teach simple steps.
“We’re open to all ages, since Irish dance is for everyone, regardless of dance ability or experience. Anyone can come and learn. Our students start as young as 3 years all the way up to adults,” Wolff said. “Our coaches help dancers with encouragement and training to inspire creativity, spirit and drive.”
Mactír will be collaborating with their neighbors the Zorongo Flamenco Dance Theatre and School as well as the International Wolf Center. “Our block is home to a few dance studios. We have the Flamenco and Tapestry’s social dance,” Wolff said. “We love our street and the collaboration in our dance community.” 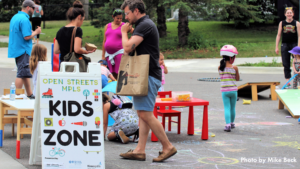 Jordan Will is the owner of SLFSH Massage based in Eagan, but he wants to show clients in South Minneapolis that people need to take time from their very hectic lives to give back to themselves.
“Massage is beneficial in many different ways. It helps with blood circulation and speeding up healing. It’s a stress reducer. But we’re try to remind people that your body is your best tool for everything you do, and by ‘being selfish’ and taking care of it, you keep your body working at its optimal levels. You can’t help others without first helping yourself,” Will said.
At Open Streets, “we’ll be there to try to spread this message along with offering five-minute massages to cement this idea of self-care into Minneapolis and surrounding communities,” Will said.
“We hope to gain new clients and supporters. I understand the grind and the effort that we all put in with our jobs, families and friends,” Will said .“I understand we can’t always focus on ourselves. But I started and built this company to remind you all that you and your well-being matter too.”

“We offer health, wellness and cultural arts programming,” said Britt Howell. “I enjoy Open Streets because there’s a little something for everyone.”
Howell’s group will be partnering with Nice Ride Minnesota, a bike-sharing program concentrating on sustainable food and transportation. “Nice Ride for All memberships usually cost $109 a year,” she said. “Here at Open Streets, it will cost only $5 for the entire year.”
They will also be signing people up for a food education program and classes about plant-based foods, Howell said.
At Open Streets Minnehaha, the group’s location will also include Pop-Up Poetry with Lupe Castillo (aka La Poetress), one of this year’s recipients of an arts grant from Minneapolis’s Creative Response Fund.
“BF50 Indigenous Health Corridor will be filled with energy around sustainable food and sustainable transportation as well as an eclectic vibe of celebrating culture,” Howell said. 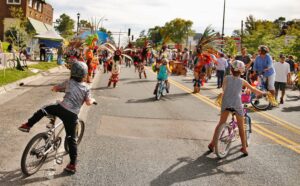 “We’re the Crosstown Community Band. We’ve been in existence about 10 years, and play for a variety of events in a variety of musical styles,” said Bruce Wright, the band’s founder and one of their acclaimed clarinetists.
The Crosstown Community Band welcomes anyone who plays a band instrument. “We’ll be playing for about an hour and a half, with one break. What we get out of attending is the opportunity to bring the joy of music to the community, and if we pick up a new member or two, that would be great.” All musicians should be able to play at a high school level and should be able to sight-read music. High school students can join with parental consent.
When the band was first organized in 2011, there were six members. The group now has more than 25 regulars, a perfect size for events like Open Streets.
Since first forming, the Crosstown Community Band has played for a number of local events in a variety of styles including traditional, contemporary, pop and jazz. They also hold an annual Christmas holiday concert. Their music ranges from “Peter and the Wolf” to John Philip Sousa and music from popular movies. 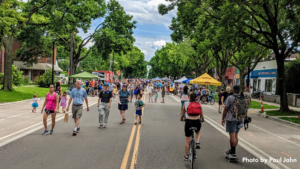 Belén Rodriguez moved to the U.S. from her home in Argentina in 2012. She started cooking foods from her home country, and six years later opened a farmers’ market booth and catering business. But COVID forced her to close these. Instead, she started to use her grandmother’s empanada recipes for a take-and-bake product using all natural ingredients.
While her empanadas can now be found in 130 grocery stores across seven states, she will be at Open Streets Minnehaha as a way to connect with and thank her home neighborhood in Minneapolis.
“I absolutely love living in Longfellow. We brought our Longfellow home six years ago. We have wonderful neighbors, and the sense of community is great,” she said.
Rodriguez is convinced that most people in the Twin Cities are familiar with empanadas. “For those folks who have never tried them before, I like to say they are little pockets with savory fillings,” she said. 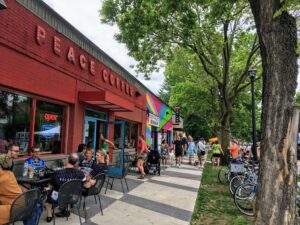 “Every culture has some kind of dish consisting of dough and a variety of fillings, like samosas, dumplings, Jamaican patties, pasties or even pierogis. There is no heat in ours, but there’s definitely a lot of flavor in them,” Rodriguez said.
Attend Open Streets and stop by the booth and you can choose from various styles and flavors of Rodriguez’s Quebracho Empanadas.
“Our chicken recipe is creamy like a chicken pot pie, with herbs, lemon and red bell pepper. The spinach and cheese variety is similar in texture to artichoke dip, with garlic, black pepper and a dash of nutmeg, and the beef recipe is similar to taco meat, with earthy notes of cumin and paprika,” Rodriguez said. And then there’s the Mendocino empanada.
“This last flavor also has eggs and olives and is what we in Argentina call the Mendocino empanada, a typical recipe from the wine country in Argentina,” she said. “Come and try them and enjoy.”