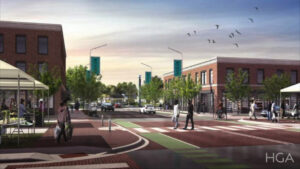 Rondo – reconnect or reparations, or both?

St. Paul’s Rondo neighborhood was the center of the Black community in the Minneapolis–St. Paul region for much of the 20th century. The intact Rondo neighborhood was economically active, social and self-supportive. The core of Rondo was demolished between 1956 and 1968 to make way for the construction of the I-94 freeway. At least 650 families were displaced from the neighborhood, as well as many businesses and community locations.
On Aug. 18 of this year, St. Paul Mayor Melvin Carter III proposed the creation of the Inheritance Fund to help low-income former Rondo residents purchase homes. Residents who earn under 60% of the area’s median income are already eligible for $40,000 grants; Carter proposed using existing housing trust fund money for an additional $50,000 ($60,000 if they buy within the bounds of the old Rondo neighborhood) in forgivable down payment assistance.
This is what reparations could look like. Of course, as is always the case with reparations, for some it will be too late. I thought of this as I read the story of Rev. George Davis, the late grandfather of Nick Khaliq of St. Paul. Nick Khaliq was born Nick Davis in the Rondo neighborhood in his grandparents’ home at 304 Rondo Ave. Later, his mother and her children moved to their own place, but Nick remained close to his grandparents. 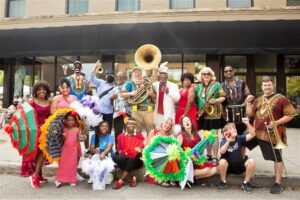 In an article published by Twin Cities Habitat for Humanity, Nick describes the trauma of the family’s eviction when he was a young teenager:
“I came home that day and saw the big moving truck and saw police cars. I was looking around wondering what was going on. I knew that my grandpa didn’t want to move. I asked, ‘Where’s my grandpa?’ When I walked in I saw they were tearing stuff up to make sure he didn’t come back in there. One of the officers said, ‘I’ll take you to where your grandparents are.’”
When Nick arrived at his grandparents’ new place, a rental on the other side of town, he found them sitting in the dark. Their look said everything. “It broke my grandfather’s heart because the only thing I think a Black man had back then was his dignity, his pride, self-worth, and independence. He didn’t ask anyone for anything. He was a pastor, and people in need would come by and he would help them out with prayer, food, or a word of encouragement.” Despite being a healthy man, Nick’s grandfather died a year later.
If you want to learn more about the history of I-94’s construction, an online resource called MNopedia is a good place to start, with the article “Neighborhood Resistance to I-94, 1953 – 1965.” Use the search function on the home page: www.mnopedia.org.
Another approach to repair is to repair the neighborhood itself. This is the aim of the Reconnect Rondo project. From their website, reconnectrondo.com:
“ReConnect Rondo is leading a restorative movement. ReConnect Rondo is a 501(c)(3) nonprofit organization driven to bring prosperity to the Rondo neighborhood. We’re eager to right the wrongs of the devastation caused by the original I-94 construction. We’re ready to work with the Rondo community and others in Minnesota to reverse systemic oppression once and for all. We’re passionate about creating an African American cultural enterprise district connected by a community land bridge.”

Jennifer Becker at work in her violin shop.

Retail and services on and near Selby Avenue

Selby Avenue today looks a lot healthier than it did in 1980, about 15 years after I-94 was completed. According to Wikipedia, at that point businesses could not get insurance, 20% of residents of the avenue were below the poverty line, and three of the four corners of Selby and Dale were vacant. Houses as well as commercial sites stood empty with boarded or broken windows.
Now most of Selby Avenue looks vibrant and thriving. It has all the types of businesses that make a neighborhood desirable. One of those is Walker 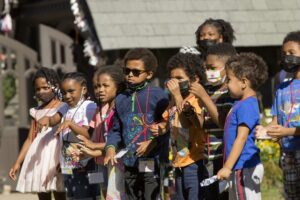 West, a community music academy at 760 Selby Ave. (its third location, not counting the founder’s home where it started). Walker West was founded in 1988 by two musicians, Rev. Carl Walker and Grant West, to teach piano to neighborhood children. Coming into existence soon after Selby Avenue’s nadir, the school has had two moves, some crisis points, and a few reinventions. They have added other instruments and competencies over the years and now employ a full staff of teachers of all aspects of music.
Walker West’s current executive director is Braxton Haulcy, who brings 35 years of business experience to the role. Haulcy’s vision is to raise the profile of Walker West so more funders know they’re there, and to partner with schools to replace the music classes they have dropped over the years due to declining enrollment and funding. 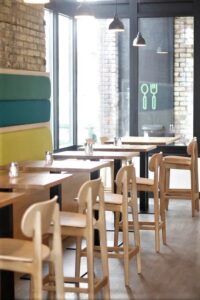 Another longstanding business that’s also music-related is Jennifer Becker Violin Makers and Restorers at 1161 Selby Ave. She has an awesome website, www.jenniferbeckerviolins.org, consisting entirely of videos showing her work, interviews with her, performances and more. Becker has been making violins since 1970, trained by her father and grandfather, both named Carl Becker. She came to Minneapolis from Chicago in 1978 and moved into her present studio on Selby Avenue in 2015.
There’s another interesting backstory behind Gary Moore of Gary Moore Custom Furniture at 787 Selby Ave. Moore’s interest in woodworking and furniture design “was sparked at school in England, and stoked by a grandfather with a ‘make do and mend’ attitude, who was into sustainability and eco-consciousness long before ‘green’ was a thing.” Moore initially pursued printing as a trade but switched to his woodworking passion at age 37.
After design school, marriage to a Minnesotan, and fatherhood, Moore moved with his family to St. Paul and opened his business. “My designs are drawn from the natural world and inspired by great architecture. I love the hexagons of a honeycomb, and use them frequently in my designs,“ Moore says. “I primarily use sustainably sourced wood and with the offcuts of the large furniture commissions, I make smaller pieces (cutting boards, iPad stands). Like my grandfather, I hate to see anything wasted. Even our sawdust … is given away to a woman who keeps urban chickens.”
The final business we’re highlighting is Mother Co., Plants. This is a business that sells houseplants of all types, plus the gear to take care of them, both in retail and wholesale mode. The business was launched in Northeast Minneapolis in 2018, and the branch outlet at 162 Dale St. (just south of Selby) opened in November of 2020. This business has a stellar reputation, judging by all the happy blog and Instagram posts from St. Paul customers who no longer have to trek across the river to get a new plant or some expert advice.

A couple of restaurants 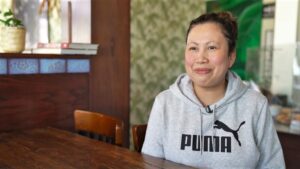 Kalsada, a “modern Filipino” restaurant, is now open at 1668 Selby Ave. It’s a new venture by the couple who own Cafe Astoria. Kalsada serves Filipino dishes with contemporary interpretations – “authentic flavor, delivered proudly inauthentically, not your lola’s cooking.” You can download a menu and also order online from their website. They are open for dinner starting at 4 p.m. on Tuesday through Sunday, with additional hours for brunch from 8 a.m. to 2 p.m. on Saturday and Sunday.
J. Selby’s, a vegan restaurant in St. Paul, is still going strong, with the dining room open again. They’re at 169 N. Victoria St. (Try the soft serve.) Their September special is the Kimchi Brat-wich, which consists of a Beyond brat, bok choy, mustardy kimchi relish and mayo on a pretzel bun (can also be made gluten free). Check out their online reviews for a sampling of just how much people love J. Selby’s food, staff and surroundings. As one reviewer wrote, “This is THE vegan restaurant. I can’t even begin to describe how good the food is. Even meat-loving skeptics (aka me before I first had their cauliflower wings) can find something to fall in love with.” As a side note, in an interesting juxtaposition of business-to-business hyperlocalism, Gary Moore designed and built the furniture at J. Selby’s, so be sure to admire it the next time you’re there.