Change in the air at the Market

This time last year, things were different at Midtown Global Market (MGM). There were more vacant spaces, and there was an atmosphere of worry among many of the vendors. Since that time, grants have come in, plans have been made and started and a few new vendors have appeared on the scene. Also, Earlsworth “Baba” Letang, manager of the market for 16 years, was appointed director of community engagement at the Neighborhood Development Center (NDC), one of two nonprofit owners of MGM.
Letang’s replacement is the new general manager, Jasmine McConnell, who was hired in June. In August, MGM announced a sweeping set of redesigns and other changes, some starting immediately, some waiting on finalization of funding. Among the things that either definitelyor hopefully will be happening in the coming year, according to an August piece in the Minneapolis/St. Paul Business Journal:
• An overall refresh and reconfiguration of the common areas, the first since 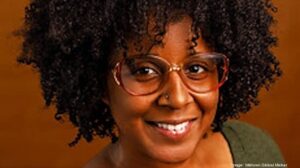 the beginning of MGM in 2006, designed by the same firm that did the original, Uno Branding.
• The addition of a beauty services wing, Salon Suites, which will include a hair salon, a nail bar and a barber shop.
• An expansion of The Art Shoppe.
• Expansion and improvements for new vendor Slice, mentioned below.
• Expansion and improvements of the former Hot Indian space for incoming new vendor MomoDosa.
• Expansion of the old Kitchen in the Market space, now occupied by the Indigenous Food Lab (IFL), to provide space for an herbal tea bar and a retail section.
I am particularly looking forward to the Salon Suites, as I currently 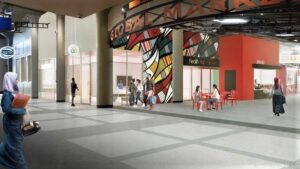 patronize the only beauty service now available at the market, Leila’s Brow Art, and it would be great to get a one-stop mani-pedi and haircut at the same time. I also have several artist friends who sell their wares at the Art Shoppe, so I am eager to see what their expansion brings.
In a separate project, the other owner of MGM, the Cultural Wellness Center, is building a cultural health hub, using the design services of local firm Design by Melo. There’s not a lot of information available about what a cultural health hub is and when it will be complete, so we’ll just have to wait and see. 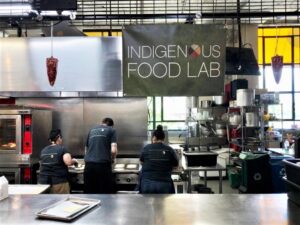 The last few times but one that I visited MGM, the Indigenous Food Lab space was enclosed with plywood barriers and it appeared to be under construction, with no actual food activities occurring. But the very last time, in mid-September, the barriers were down and there was a lot of kitchen personnel busy in the area, but no public-facing activities yet (i.e., the tea bar and retail section mentioned in the articles about renovations from August). So again, I await in hope.
By the way, the institution behind the IFL, Native American Traditional Indigenous Food Systems (NATIFS) continues to garner awards. The latest was a win in the Bon Appetit “Heads of the Table” awards where founders Sean Sherman and Dana Thompson got the prize in the “Educators” category for the educational mission of NATIFS and the IFL. 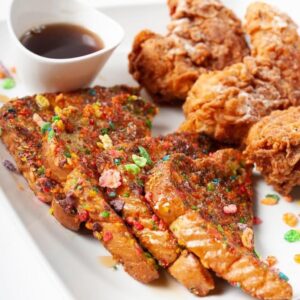 The Kitchen By Baked Brand’s Not Your Normal French Toast

The Kitchen by Baked Brand has actually been in its new space in the market for a while now but didn’t make it in time to be spotlighted last year. The Kitchen is the first brick-and-mortar presence of Baked Brand, the concept of Destinee Shelby. Its offerings include some traditional southern-style soul food favorites, some unique takes on comfort foods like Frenchtoast, and some prepared natural juices and juice blends.
The MGM Twitter account posted recently about Shelby’s NIL deal with Steven Ortiz Jr., a freshman safety on the University of Minnesota football team. I had to look up both Steven Ortiz Jr. and what the heck a NIL deal is. It stands for “name-image-likeness” and it’s basically a student athletic star having a business pay them to use their NIL to sell something. In this case, Ortiz, who is Puerto Rican, wanted to use the money for hurricane relief, and The Kitchen is selling an entire meal named for him, plus having the added good karma of the profits going to help Puerto Rico recover from its latest natural disaster.
Slice is already in business in its new space, having soft-opened for Juneteenth. Slice was founded and still operates an outlet in Northeast Minneapolis at 519 E. Hennepin Ave. The business is owned by two 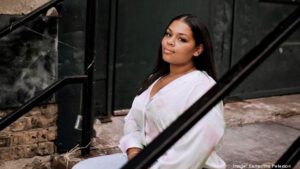 Destinee Shelby of The Kitchen by Baked Brand

young Black entrepreneurs, Adam Kado and Hosie Thurmond, which makes it a great fit for MGM due to Slice’s vision of business empowerment for BIPOC businesses. Their concept for Slice was pretty simple – the Twin Cities needs more places where you can buy great pizza by the slice. Can’t argue with that.
Signage was up for MomoDosa at the old Hot Indian space at the market on my last visit, but they weren’t selling momos or dosas yet. MomoDosa, too, is a second outlet for its company. Its first spot was and still is in Malcolm Yards in Southeast Minneapolis. MomoDosa is very popular at Malcolm Yards andwill be a great addition to MGM as well. The name more or less describes the menu, which is dominated by momos and dosas. Dosas are Indian street food, like a gluten-free, egg-free crepe made with lentil flour, and filled with meat and/or cheese and/or vegetables. Momos are Nepalese filled and steamed dumplings, similar to potstickers, and also a street food. 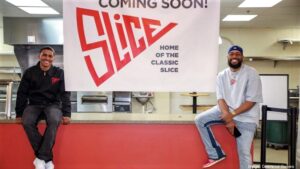 New ways to interact – Friends of the Market and its cookbook

Like public libraries and other public goods that rely to some extent on philanthropy, MGM has a support group called Friends of the Global Market; it was founded and received IRS certification in 2019. One of its current fundraising projects is the sale of an MGM cookbook. What a fabulous idea! You can buy the cookbook on the MGM website at midtownglobalmarket.org. I don’t have mine yet so I can’t tease what’s in it, but with all the great food vendors there, I’m sure there will be some winners.

Events at the Global Market 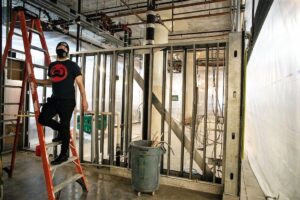 MGM has events on most holidays and throughout the year. Most of them are free and all of them are family friendly. Regular events include Family Friday concerts in the early evening, and Saturday Sounds concerts on various Saturdays from noon to 2 p.m. Also on Sunday, Oct. 9, from noon to 2 p.m. there will be a celebration of Indigenous Peoples Day featuring Spirit Boy Drum and Dance Crew.
At the end of October, there will be two great free family events to choose from on consecutive days. On Friday, Oct. 28, from 5 to 7 p.m., there will be a Not So Scary Trick or Treat, with music, costumes and treats. On Saturday, Oct. 29, you can experience MGM’s version of a Día de Los Muertos Fiesta. This will involve “live music, dancing, arts, foods, catrinas, ofrenda and more,” and will take place all over the market from noon to 5 p.m.
Keep an eye on MGM’s calendar through their website (link above) for 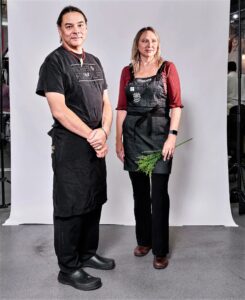 these and future events, special offers and new vendors coming in. I also discovered that parking validation for one hour of free parking with any purchase has been reinstated at the market. 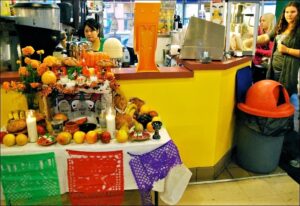