The state of education in Minneapolis in October 2022 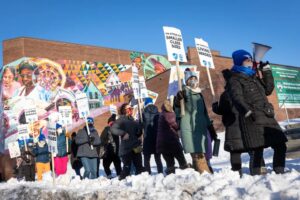 Scene from the Minneapolis teachers’ strike in March 2022

In March of 2022, as you probably remember, Minneapolis Public Schools (MPS) teachers, represented by the Minneapolis Federation of Teachers or MFT 59, and Education Support Professionals (ESPs, represented by ESP 59) went out on a historic strike. It lasted three weeks for 14 school days. The Tentative Agreement came on the third Friday of the strike and the vote to accept it happened over the weekend, an unusually short time frame due to the urgency to resolve on all sides. The two branches of the union – teachers and ESPs – both voted over 75% in favor of the agreement.
So what did they win? Greta Callahan, president of the teachers’ branch, 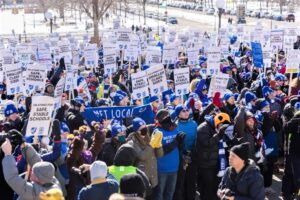 Demonstration at the Minnesota Capitol

said they had one absolute hard line: ESP pay averaging $24K per year would be raised to $35K per year (nearly a 50% increase) through a combination of higher hourly rates and more (and more stable) hours. This demand was won in full. The teachers initially demanded a 20% pay raise, which sounds high, but it would have just restored their pay in real dollars to what it was 20 years ago, and hopefully would help stem the flood of teachers leaving for better paying jobs in the surrounding suburbs.
The teachers reduced their demand to 10%. They settled for 5%. But there were other gains in a portfolio of demands that encompassed social justice needs and practical needs. Another historic gain was to protect teachers of color from layoffs, which I found ironic, since it had long been laid at the union’s door that their seniority rules were the reason teachers of color, already in too short supply, were often laid off first. But more on that turning tide later. They also gained 10 COVID sick days with pay per year, more mental health supports, better masks, and actual caps on class sizes.
So that’s the part of the iceberg you can see. What was some of the other fallout and unintended or unexpected consequences of the strike? 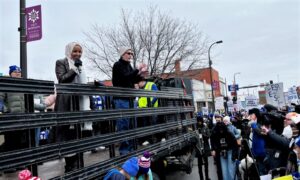 Rep. Ilhan Omar speaking at a rally for striking MPS teachers and ESPs on March 14

• Part 1 – Probably largely due to frustration around the strike, which highlighted many intractable problems plaguing Minneapolis Public Schools, Superintendent Ed Graff resigned in March, effective this past June. See below for more about the superintendent vacancy and the search for a new one.
• Part 2 – Right-wing groups, predictably, are attacking the clause in the new contract that protects teachers of color from layoffs. This fits comfortably with some of their other favorite school board policies – attacking critical race theory, censoring books, and “don’t say gay.” See more analysis on this below.
• Part 3 – MFT 59 seems energized to go more deeply into local politics. They ran a slate of their choices for school board positions. All of them won DFL endorsement at the city convention, although one subsequently dropped out, and the three who had to run in the primary also won their primaries.
• Part 4 – Enthusiastic public support and community solidarity caused politicians, even Republicans, to wake up. Parents and families are beginning to push back against the old “blame the teacher” narrative. 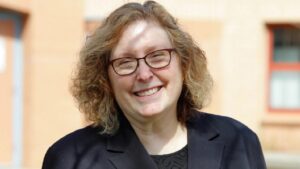 No superintendent? Who’s in charge? For how long?

Rochelle Cox was appointed interim superintendent of MPS effective July 1. The search for a new “permanent” superintendent (which in MPS, means maybe four years if the last two decades are typical) is ongoing and is expected to conclude with a hiring around June or July of 2023. Cox has been employed by MPS since 1997 and has held several leadership positions including associate superintendent.
School board member Josh Pauly also resigned in March. He was replaced by Cynthia Booker to complete his at-large term. Booker was an unsuccessful candidate in 2018 and has had several jobs leading teams in the public, private and nonprofit sectors, including being the executive director of the Sabathani Center. She is a graduate of Washburn High School.

Deborah Jane Clapp, identified as a “Minneapolis taxpayer,” filed a lawsuit against MSP and the union for illegally spending tax money via the clause in their new contract that protects teachers of color from layoffs. She is represented by Minneapolis attorney Daniel Rosen and Washington, D.C. attorney Michael Bekesha, a lawyer for the right-wing organization Judicial Watch.
I think the right wing may be overreaching with this deeply uncool move. As reported in the Sahan Journal in an Aug. 24 piece by Joey Peters and Becky Dernbach:
‘Teachers, union officials, and advocates criticized the lawsuit as an attempt to stir up outrage on an issue they say is not controversial locally. During negotiations, these protections were a top priority for the union, the school board, and teachers of color. At the end of a contentious strike, the protections represented one point that all sides agreed on.
“Increasing Minnesota’s teacher diversity also is a rare issue that has found bipartisan support at the legislature. Statewide, about 5 percent of teachers are people of color, while more than a third of Minnesota students are. In 2021, Minnesota’s politically divided legislature tripled funding for recruiting and retaining teachers of color.” 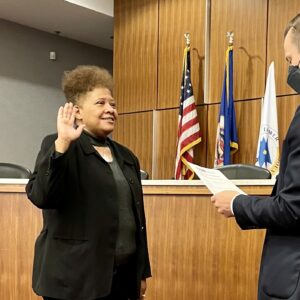 Who is running for school board and does MFT 59 support them?

Yes it does! Or at least it doesn’t oppose any of them. Specifically here in District 5, and for the two at-large seats, there were two hard-fought races, one at the DFL city convention, where the full MFT 59 slate won party endorsement, and another in the August primary, where all of the DFL-endorsed candidates won their races. It’s almost a done deal. On the ballot in November are Collin Beachy and KerryJo Felder for the at-large seats, Lori Norvell for District 5, Fathia Feerayarre for District 3, and unopposed and unaligned candidate Abdul Abdi for District 1.

Republicans, even in red states, have suddenly discovered that funding public schools is … popular? Ope, recalculate.

One of the biggest results of this strike, one which echoed equally historic educators’ strikes in the past 10 years in Chicago and then in West Virginia and Arizona, is the clarification of what the community – parents, taxpayers, both parties, and students – really wants, and who they really think is to blame for the decline in education. In the days leading up to the strike, pundits worried aloud that the unions were aiming too high, and that there would be a backlash from beleaguered families. This was completely wrong. Families, neighbors, passing truck drivers, elected officials – everyone seemed to fall over themselves rushing to support teachers and to help kids and parents weather the strike.
An interesting piece appeared recently in a publication called The 74, focusing on education issues nationwide. Kevin Mahnken on Sept. 21 wrote, “Why are so many Republicans raising teachers’ salaries?” Republicans may be destructive and mean, but they aren’t stupid, at least not all of them. Anyone can see that many of the problems facing schools are due to a shortage of teachers, and that’s because they’re simply not being paid enough. Largely successful and widely supported teachers’ strikes have finally brought the point home.
From Mahnken’s article: 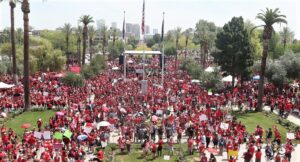 A 2018 rally to support striking teachers in Arizona

“In late March, Florida Gov. Ron DeSantis made a major announcement on K-12 education.It didn’t concern the so-called ‘Don’t Say Gay bill,’ which had triggered nationwide controversy earlier that month over its restrictions on classroom instruction about gender and sexuality. And no mention was made of critical race theory, a frequent target of conservative ire. Instead, the outspoken Republican took the opportunity to confirm that his upcoming state budget would include $800 million to raise salaries for both novice and veteran teachers, a massive increase over the previous year.”

Besides the lawsuit, there is at least one other crisis facing Minneapolis schools this year. After promising the families of special needs students that their instruction would be all in-person, MPS found itself at the start of the year with a desperate shortage of special education staff and had to renege on that promise. (Surrounding districts including St. Paul have not had this problem.)
This quote is from the daily newsletter from racketmn.com, for Aug. 18:
“For many kids and teens, particularly special needs students, it [virtual classroom] doesn’t work. ‘Basically, what you’re doing is handing off the responsibility to a family member on the other side of the computer,’ Wendy Tucker, an attorney at the nonprofit Center for Learner Equity, tells Beth Hawkins for The 74. ‘I have real concerns about the legality of that.’ Parents are saying this last-minute change could be devastating to kids’ education.”