Why it’s important to vote for Keith Ellison

Why is it important to vote for Keith Ellison?
Because he’s doing what’s necessary and right, and he’s being punished for it.
He’s getting attacked for being soft on crime in the midst of a crime wave. 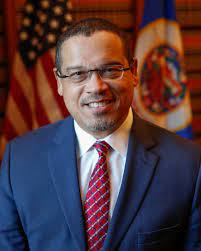 But the attorney general doesn’t prosecute crimes. That’s the job of county attorneys. The attorney general only prosecutes criminal cases when asked to by a county attorney, which is what happened with the George Floyd murder by Minneapolis police officer Derek Chauvin. And Keith Ellison came down on Derek Chauvin like a Mack truck. He was anything but soft on crime. But that’s not the kind of law and order that white barstool bullies are rooting for. They want Blacks and immigrants punished for trying to take away their jobs and their homes. They want them kept in their places. And Ellison wasn’t doing that.
Ellison is five percentage points behind his Republican opponent among white men. Walz is one point ahead, and Secretary of State Steve Simon is two points ahead. A lot of white men just can’t support a Black man using the law to challenge the old order of doing things.
Ellison is 17 points ahead with women, but he’s 16 points behind with men. That’s a 33-point gender gap. Walz is 20 points ahead with women and eight points behind with men. Simon is 20 points ahead with women and only seven points behind with men.
Men, and particularly white men, are digging in their heels. They’re resisting change. They want to go back to a reality that only existed in a John Wayne technicolor fantasy.
Walz has said he would not allow a woman’s right to an abortion to be challenged on his watch. He would veto any bill that came out of a Republican legislature.
But the threat to women’s control over their own bodies is really more immediate and more insidious.
Earlier this summer Ramsey County District Judge Thomas Gilligan ruled that abortion restrictions, including a mandatory 24-hour waiting period, a requirement that both parents be notified before a minor can get an abortion even if the father can’t be found, and a rule that only physicians can perform abortions, were unconstitutional. It is the responsibility of the attorney general to defend the state’s laws, but Ellison declined to appeal the judge’s decision because, essentially, he agreed with it, and he didn’t think a higher court would reverse it.
That’s one of the things that’s at stake in this election. A Republican attorney general could make it much more difficult for a woman to make decisions about her own body.
If you believe in fighting racism, and if you believe a woman has a right to make decisions about her own body, then it’s important to vote for Keith Ellison for attorney general.