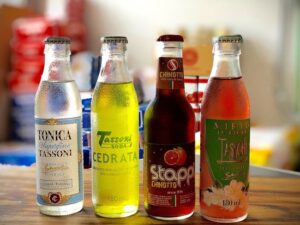 After all the hopeful hype last month about the downtown Minneapolis restaurant scene being back, the two most notable closings in mid-October were downtown. One was trendy and “of this decade” – Seven Steak, Sushi and Rooftop, which has apparently closed and reopened several times before, but it sounds like this is it.
The other is an old stalwart from at least the early 1990s. I used to go there in my bookselling, New Party organizing days. This was the sudden announcement that Rock Bottom Brewery, a sort of brewpub that preceded the whole craft brewery trend by at least a decade, was closing permanently.
Openings, on the other hand, are mostly close to home. Three of these are new locations, for Wildflyer Coffee, Momo Dosa, and Vegan East. Wildflyer Coffee is a youth-oriented social enterprise as well as the new coffee shop in the former Peace Coffee location on Minnehaha Avenue. They are currently fundraising for a new expansion planned for early 2023 in St. Paul, located inside Seventh Landing, an apartment building for young adults experiencing homelessness. 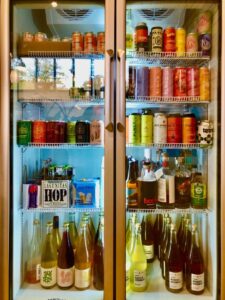 Momo Dosa’s first spot was in Malcolm Yards, the trendy food hall in Prospect Park. They recently opened a second location at Midtown Global Market, in the space vacated by Hot Indian. More about them in the mini-review below.
Vegan East started out in White Bear Lake, then expanded to Uptown and Northeast Minneapolis. Their newest branch is their fourth location and is in the Nokomis neighborhood at 34th Avenue and East 55th Street, in what was formerly a QC Pizza. This news came from bringmethenews.com, where the report was based on the sign appearing on the building, and it was noted that there had been no announcement or other information from the parent company.
The actual brand-new place is Marigold, hailed as Minnesota’s first ever all non-alcohol bottle shop. The story comes from Racket (racketmn.com.) The innovative shop is open now at 3506 Nicollet Ave., adjacent to the beauty salon also owned by the founder, Erin Flavin. The shop contains a variety of alternative beverages, from functional drinks like kombucha, shrub, hop tea, caffeinated drinks, or dry flavored herbal or herb-and-fruit sodas, to the newest thing – seltzers enhanced with CBD and/or THC. 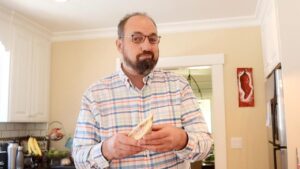 Barry Enderwick of ‘Sandwiches of History’

Weird news of the food world

I was charmed by this piece in Racket, (racketmn.com on Oct. 13) by guest writer Brendan Kennealy on the idea of pairing an eatery with a bookstore. You buy a book and take it to lunch. Very much my jam, I must admit. The author invited feedback such as bookstores he missed (“drop your superior knowledge in the comments,” he said). Well, I don’t know about superior, but I did have additional knowledge, and offered two restaurants to pair with Uncle Hugo’s and Uncle Edgar’s, respectively.
I miss the days when a single certification – Certified Organic by USDA – told you everything you needed to know, as it meant no chemical fertilizers, antibiotics, GMO, herbicide or insecticide was used in any part of the process. Since the early 2000s when the certification was amended to please Big Ag, the organic label has both lost its meaning and become less prevalent. The proliferation of segmented certifications to fill the gaps led to a “No GMO” label and others, and now expands further with the newish “pollinator-friendly” certifications.

In fact, there are two of them, one more strict than the other (although neither of them is anywhere near as strict as pre-2000 or even present-day organic certification). An article in one of my favorite sources of agriculture information, Civil Eats (civileats.com), does a deep dive into the science, history, industry and economics of the two organizations doing the certifying.
The two labels that have been around a few years for almonds and wine, and are now expanding to berries, avocados, vegetables and a farm-based distillery in northern Minnesota, are the Bee-Friendly label certified by Pollinator Partnership (with more flexible requirements to appeal to a wider range of producers) and the Bee Better label certified (slightly more stringently) by Xerces.
I was fascinated by the article “How to Use Italian Bitter Sodas” in an online beverage industry journal called Punch (punchdrink.com). I had never heard of most of these drinks and an investigation into how to acquire them showed that very few are available on Twin Cities shelves, although they are all available online from various sources. I am talking about products such as Stappi Red Bitter, Crodino, Chinotto by Lurisia, and Sanbitter by San Pellegrino. These are the nonalcoholic equivalents of Italian amari, which are low-proof aperitif liqueurs with a bitter dimension offsetting their slight sweetness. Bitter sodas are similar but zero-proof. I am going to investigate this and report back later. 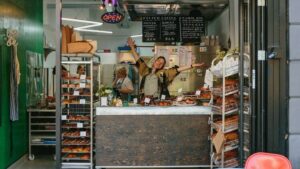 I just recently discovered, via Taste magazine online, Barry Enderwick and his “Sandwiches of History” series. These originate on Instagram and TikTok, but I’m not really into either of those platforms so I checked on YouTube and he does have a subscription channel there, called “Sandwiches of History.” There are a hundred or more 3-minute videos on sandwiches, some classics – croque monsieur, banh mi, French dip – and some extremely weird, like the St. Paul sandwich, the nasturtium sandwich, and the deeply unlovable bran sandwich. Check it out.
Finally, the ultimate weird story. One of London’s premiere bakeries, located in Camberwell, was called Frog. Strange name, but wait, it gets better. Famous chef-restaurateur Adam Handling, founder of The Frog restaurant in a more upscale part of the city, had a cease-and-desist order served on Frog bakery, accompanied by the threat of a full-scale brand infringement lawsuit. So the owners caved immediately and changed the name to Toad.

I sampled the fare at the newly opened Centro/Vivir/Everywhen Burger Bar spot on Eat Street (in the former Wedge Table space). Use your smartphone to scan the QR code at your table, which will pull up the menu, and the resulting order will have your table number embedded. They also give you a paper menu if you ask, which I did.
I had a fish taco, which was small (as was the price) and I rated it 4.8 out of 5. I also had a horchata, which was delish. And I had yucca fries, which were executed well and a great value for the money, but were too spicy for me, so I didn’t finish them. (Usually these are just salted, and the spice is all in the dipping sauce. These were liberally covered with a dry chili spice of some type and the dipping sauce was a grade hotter, so no refuge for the wimpy.) From the Vivir menu I ordered a dessert, a chocolate mole cupcake, which was a 5 out of 5.

I also sampled another new spot in my neck of the woods – Momo Dosa at Midtown Global Market. I wanted to try both the momos and the dosa but knew it would be too much for one meal, so I ordered the momos to eat there and a dosa to take home for later. (In retrospect, I should have done it the other way around, as the dosa was not amenable to being reheated.)
I had the vegetable momos, which have a filling similar to a Chinese vegetable egg roll – cabbage, green onion, carrot, etc. They come with two dipping sauces. I also had a mango lassi with that. Very good and filling. Even though I somewhat sabotaged the dosa (a masala dosa, vegetarian, mostly potatoes) by trying to reheat it, it was still yummy, and I will probably have that instead on my next in-person visit. In addition to momos, including the interesting ones filled with bison, they offer a sambar lentil soup on its own, three varieties of jhol momo (momos in a spicy soup), samosas, pakoras and a dessert dosa containing banana, jaggery and whipped cream. This is a great addition to the market and to your rotation of spicy takeout foods.