On Friday, Oct. 14, Mortenson Construction, the Lake Street Council and numerous small business owners, many of them BIPOC, gathered under a big white tent at Lake Street and Chicago Avenue to celebrate the progress made in the restoration of Lake Street. There were photo displays of businesses before and after reconstruction, speakers, food and beverages, and, of course, media coverage. In the background were some of the beautiful murals created as part of the restoration and celebration of historic Lake Street.
The Restore-Rebuild-Reimagine Fund was established by the Minneapolis Foundation, beginning with a $5 million donation from Delta Dental. The goal of the fund is to assist small business owners with external repairs and upgrades. Additional companies joined the fund, including Target and the Donaldson Foundation.
David Mortenson, chairman of Mortenson Construction, kicked things off by describing how he and his company got involved in the restoration projects following the murder of George Floyd and the civil unrest, riots and destruction that followed. Mortenson said that he was inspired by the small business owners’ resilience and commitment to their neighborhoods, stating, “If people broke into my place of business, stole and destroyed property, I think I would have crawled under a rock.” Not these folks, who told him, “Our neighborhoods need us.” Mortenson admired the spirit and determination of those he met who had been impacted by the riots. Businesses that have benefited from the project are diverse and some were represented at the event. They included restaurants, a nail and hair salon, a carwash, a pizza shop, grocery stores, child care providers, a liquor store, coffee shops, a laundry service, a dental clinic, auto repair and services, etc. Indeed, the neighborhood needs them.
Mortenson described how they approached funding, reconstruction plans and the enormous job of bringing numerous small businesses back to life. Focused efforts raised over $14 million, allowing assistance to 160 businesses. By summer 2022, 72 properties on Lake Street had received a total $3.9 million in financial assistance. 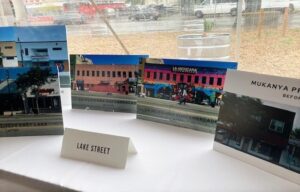 Before and after photos of Lake Street businesses were on display for attendees to see at the Oct. 14 celebration

In addition, two other neighborhoods received reconstruction assistance including 17 properties on West Broadway ($1.6 million) and 32 properties in the University Avenue/Midway area ($1.7 million). Tito Wilson of Wilson’s Image Barbers & Stylists said, “I couldn’t believe it when I was told I was getting new windows and awnings – free of charge! This saved me $25,000-$30,000.”
In addition to Mortenson Construction, other construction companies were invited and joined the reconstruction effort including TRI-Construction, Ryan Companies, J. Benson Construction, Kraus-Anderson and Frana Companies. Additional supporters of the ongoing restoration include Thomson Reuters, Wells Fargo, the Minneapolis Foundation, the City of Minneapolis, LynLake Street Art Series, LISC Twin Cities, Hennepin County, the We Love Lake Street Fund, and more.
Allison Starkey, executive director of the Lake Street Council, spoke at 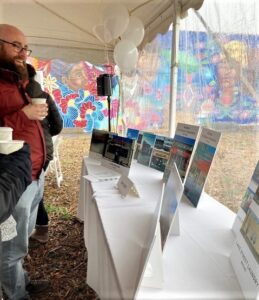 the event, pointing out that Minneapolis did not receive FEMA support because the disaster was deemed a human one, not nature-created such as a hurricane or drought. “Our goal is not only to restore Lake Street but to enhance it and create generational wealth for the business owners, many who are BIPOC and immigrants who call Lake Street home.” She described how this rich blend of cultures, businesses and ethnic groups came together with a common goal – to stay and rebuild. Starkey also spoke about the Lake Street Council’s Placemaking and Activation grant program, supporting beautification efforts via local artists. They have been able to award 34 grants totaling $540,000. We Love Lake Street (a 501c3 nonprofit) produced a lovely handout for the event featuring some of the mural artists and images of their work including “The Healer” at 29th and Clinton Avenue, “Ancestors” at 15th and East Lake Street, and more.
Representatives of Mercado Central, a thriving Latino marketplace of 35 businesses (food, retail and services) since 1997 at Lake Street and Bloomington Avenue, spoke in both Spanish and English about their experiences and restoration successes.
In spite of the occasional drizzle, the mood at the event was sunny, friendly, hopeful and upbeat as the sun descended beautifully over the colorful murals on buildings to the west of Lake Street and Chicago Avenue.