Sweeping up the homeless 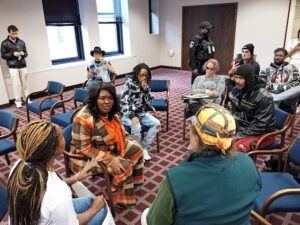 Have you ever wondered how you would fare if for unforeseen reasons you became homeless? You may think it wouldn’t happen because you have resources and could reach out to family and friends for help. But what if you couldn’t? What resources would you need? How would you access them? How would you stay safe? Would you have allies? Whom would you trust? Would you opt for a shelter (assuming a bed were available)? Maybe sleep on a mat or cot alongside many others without shelter? Or approach an existing, established camp, perhaps one with a good reputation regarding safety and friendliness?
As homelessness has grown over the years,the Huffington Post in 2016 published survival tips for the unsheltered including suggestions such as: If you’re lucky enough to have a laptop, go to FedEx, plug in and stay as long as you’re allowed. Walmart garden sections are pretty good for finding a place to hide and rest among the plants. Make libraries your friends and move from library to library in order to stay in the shadows. Weather permitting, public pools are often free of charge, and you can get a shower and rinse out your clothes in a sink. Veterans of homelessness know these things and more.
Those of you familiar with Maslow’s 1943 hierarchy of needs may remember the pyramid:
1. Food, clothing, SHELTER, sleep, air, water.
2. Safety, health, property, employment.
3. Love/belonging, friendship, family, connection.
4. Esteem, respect, freedom.
5. Self-actualization, desire to be the best you can be.
Unsheltered people struggle for #1. This makes getting to #2 difficult and so on. In a camp a person may at least meet some of these needs because there is strength in numbers. In some camps there is camaraderie, a sense of community and belonging.
At the time of this writing, the homeless count for Hennepin County is 2,191 people in shelters and 487 who are unsheltered, for a total of 2,678.

On Sept. 30 the media reported that the city of Minneapolis closed the encampment at Bloomington and 28th Street, in collaboration with the property owner. Those encamped, many of them BIPOC, and witnesses to the camp sweep say they were surprised. The outlined procedures drafted by the city were absent. There are discrepancies regarding when and how notices were posted and whether services were offered, and if so, what services? There were rumors of the sweep, yet many were caught offguard. The police surrounded the camp of about 60 individuals early in the morning, blocked traffic in a large radius and brought in a SWAT team. “It was military style,” said Raul, who was watching from a nearby bridge. There were at least a dozen officers on site. Some people reported being given only five minutes to retrieve their possessions before the sweep began. Tents were sliced open, items such as clothing, medication, keys and phones were confiscated, and then the property was bulldozed with front end loaders. One camper named Robert said, “Sometimes they [social workers] come with 10 pair of gloves. But we’ve got about 60 people here.”

Upon contacting the mayor’s office to inquire about policies and practices concerning closing encampments, especially with winter approaching, I was directed to the city’s website. There I found an outline of how the Homeless Response Team (HRT) is supposed to handle the closure of encampments as well as procedures directed at property owners regarding “How to handle unsheltered individuals on your property.” The HRT is a nameless, faceless group to be accessed via a call to 311 or a government website. Apparently the goal is to intervene early and connect campers with resources, provide storage free of charge, etc. Their work is described as a “collaborative, cross departmental, multi-agency effort.” No particular departments or agencies are named, however. There is an 11-step chart outlining the procedure for closing unsanctioned encampments starting with “Prioritizing camps to be closed,” and ending with “Encampment closure debriefing with operational staff.” The HRT reports visiting the Bloomington camp 27 times. Without specific names, positions and roles there does not seem to be an avenue to accountability. Who is the final arbiter – Peter Ebnet, Director of Policy and Government Affairs, which includes the HRT?
Policy and advice to property owners who may have a camp growing on or near their property appears to be sparse. They are advised to post “No Trespassing” signs which can be obtained from Neighborhood Crime Prevention online, to contact the MPD and to hire private security. Property owners are informed that they are responsible for cleaning up their property, disposing of needles properly, and providing a portable toilet, handwashing station and secure fencing. This advice is followed by a list of fence contractors and their contact information.

Encampments are not isolated from the communities in which they’re located. They have long been a contentious issue in the city as far back as Bohemian Flats, a settlement of about 1,000 immigrants who camped along the Mississippi riverfront near the Washington Avenue bridge in the early 1900s while looking for work. It was cleared during the 1920s and ‘30s and no visible sign of it remains today, although it is part of the city’s documented history. Today, online media comments give us an overview of individual community members’ views and concerns. Encampments can attract drug dealers and users, crime and the like. Mai from the Phillips neighborhood says, “I cannot walk or bicycle with my kids anymore because it is not safe.” Police report finding stolen vehicles, illegal drugs and guns in encampments. The city reports closing encampments when they become “health hazards and a danger to the community.” Additional online comments from those living near the encampment include:
“It was violent and sad.”
“Stop directing hate at the homeless and start directing it at those in power who can create change.”
“Some are taking advantage of the city’s vulnerability. They want to live this way.”
“What do you expect? We have budget cuts in health care, understaffed and mismanaged police department, a war on drugs, real estate prices dropping here, rising there … “
“This issue has brought out the ‘Inner Republican’ in me.”
“Don’t make the most vulnerable your enemy.”
“Solutions, not condemnation.”

Demand for a moratorium

To call attention to the camp sweeping issue, tents were set up in front of City Hall in early October and supporters gathered intermittently for several days. When unsheltered people become desperate, hungry and tired they aren’t much for following the protocols and procedures of City Council meetings. Such was the case on Oct. 11 as unsheltered folks and their supporters met to make their voices heard and present their demand for an immediate moratorium on encampment evictions (aka sweeps) to the City Council’s Business, Inspections, Housing and Zoning Committee. Melanie spoke up: “I’ve been swept three times in eight days. How can I plan anything when I’m constantly moving and trying to keep my few possessions together?” Some voices struggled, while others were loud and articulate. Adjectives used were not always what you’d call “Disney-approved.” When Council Member Lisa Goodman (Ward 7) adjourned abruptly, Jason Chavez (Ward 9), Aisha Chughtai (Ward 10) and LaTrisha Vetaw, (Ward 4) stayed to listen. At one point Vetaw stated, “We need the talking stick; one person speaks at a time.” Clearly Vetaw knows some of the representatives of the unsheltered community, has rapport with them, and knows them by name. Yet she made it clear she would not sign the request for moratorium, without elaborating on her decision. Vetaw invited anyone who wanted to continue the conversation to make an appointment to meet in her office and speak one-on-one.
An attorney I spoke with recently who works for the rights of homeless people pointed out, “We have shelters for dogs and cats, the Humane Society. We feed, water and exercise them. We don’t have such for people.”