How to do it? Gracefully! 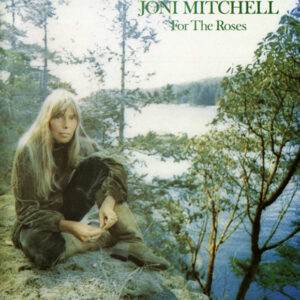 In last year’s “Gracefully,” I promised that I would pick up where I left off in illuminating the stories of people who typify the various ways to live gracefully at any age. I mentioned that I had to leave out three great Canadian singer-songwriters, and here I will partially fulfill that promise.
This column has a philosophy about what it means to live “gracefully” at any age. Which is: to always be giving to the future. Whether through environmental activism, solving persistent problems, enriching the lives of younger people through better health and education, or creating works of art that will sustain future generations, I can think of nothing more full of grace than that. “To plant trees under whose shade we will never sit.” This characteristic is certainly found in the work of the three towering Canadians of song I am eager to expound upon – Joni Mitchell, Buffy Sainte-Marie, and the late Leonard Cohen.
In the course of researching this subject, I learned of the many amazing overlaps in the lives of the three songwriters. Buffy practically “discovered” Joni, and after Joni became famous, she covered some of her songs. She also covered Leonard’s songs, and most importantly (to me, because I love it) she set a poem from one of his novels to music and made it a big hit – “God Is Alive, Magic Is Afoot.” And as for Leonard and Joni? Well, apart from both running away to Greek islands in their 20s, the two were a secret romantic couple later on, and both cryptically wrote about the other in their songs. 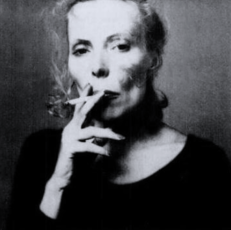 Joni Mitchell was born Roberta Joan Anderson on Nov. 7, 1943, in Fort Macleod, Alberta, Canada. She was a victim of the polio epidemic, spending weeks in the hospital at age 9 and living with weaknesses for the rest of her life, including in her left hand, which strongly influenced her unique guitar style. Joni began learning music as a child, first piano, then ukulele, and then teaching herself guitar in secret because her mother disapproved of its “hillbilly” associations.
All of her life, Mitchell has been an artist, with a great love of painting in a representational style influenced more by the Romantics and Impressionists than her single year at an art college in Calgary. She began writing poetry due to the influence of an admired high-school English teacher, but it was a personal crisis in Calgary that launched her into songwriting, according to Joni. She accidentally became pregnant by her boyfriend Brad, who left for California just as winter came on, leaving Joni 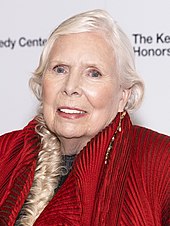 broke and desperate. She told her parents she didn’t like art school and was going to be a folk singer and left for Ontario and the big cities.
The story of Joni Mitchell’s daughter is elliptically told in the song “Little Green” on her most famous and lauded album, “Blue.” She was given the name Kelly Anderson (thus “Green, for the children who made her”) and put up for adoption. After giving birth in February 1965, Joni returned to folk singing, and with a new passion for songwriting of an intensely confessional nature because, as she put it, “I couldn’t talk to the one person I wanted to.” Just three months later she met Chuck Mitchell, traveled to the U.S. for the first time with him, and married him, and that was the beginning of folk, and later rock and jazz, megastar Joni Mitchell, although the marriage only lasted a year and a half.
Just turned 79, and in poor health, Joni Mitchell is still doing the occasional performance, and is dividing her time between her California home and her rural retreat in British Columbia. She was ecstatically reunited with her daughter, renamed Kilauren Gibb and with two kids of her own, in the late 1990s. They had a falling out for a few years, then reunited and are now close. Mitchell is a Companion in the Order of Canada, has a star on Canada’s Walk of Fame, has 10 Grammy awards, and is a member of the Rock Music Hall of Fame. Wikipedia states, “Rolling Stone called her ‘one of the greatest songwriters ever,’ and AllMusic has stated, ‘When the dust settles, Joni Mitchell may stand as the most important and influential female recording artist of the late 20th century.’” 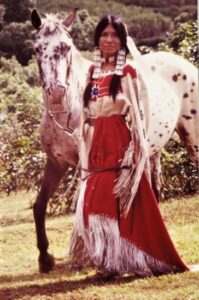 Buffy Sainte-Marie in her youth

Buffy Sainte-Marie was born Beverly (surname unknown) on Feb. 20, 1941, on the Piapot 75 Reserve, Qu’Appelle Valley, Saskatchewan, Canada. She was removed as an infant from the reservation and given to an American couple for adoption, acquiring her legal name Beverly Sainte-Marie. She grew up in Massachusetts, taught herself piano and guitar, and went on to get a degree in teaching and Oriental philosophy with high honors from UMass Amherst. She began writing songs and singing traditional folk songs in college and got seriously involved in the folk scene in New York City after graduation.
In 1964, Sainte-Marie attended a powwow on the Piapot Cree reservation of her birth, where she was adopted by a son of the chief and his wife, Emile Piapot and Clare Starblanket Piapot. Buffy was married three times, first to a Hawaiian surfer in 1968 (divorced 1971), then to Minnesota-born Sheldon Wolfchild in 1975 (divorced 1978), and finally to Jack Nitzsche, her co-songwriter on the song which won her an Oscar, in 1982. In 1989 she fled her third marriage for Hawaii, charging Nitzsche with abuse, and later divorced him. Sainte-Marie and Wolfchild had a son together, Dakota “Cody” Starblanket Wolfchild, who lived with Sainte-Marie after their divorce. 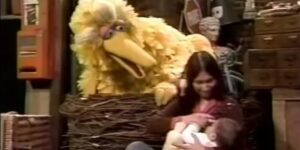 Sainte-Marie’s stellar career was accompanied by controversy – of the best kind – due to her unflinching advocacy for radical causes, especially Native American rights. She is possibly the only one of my Canadian trio to have an FBI file. She is also Companion (or Officer) of the Order of Canada, and also has a star on Canada’s Walk of Fame and is depicted on a postage stamp. All of her music awards and honors are Canadian, called the Juno, and she has pretty much one of each category, plus countless honorary doctorates in Music, Fine Arts, Law, Letters, and Humanities. She’s the only one of the three to have an Oscar, for the song “Up Where We Belong,” and is the first native American to win one in any category. The song also won a Golden Globe and a BAFTA. And she was a star on Sesame Street for over five years, has written a best-selling children’s book, and was the first person to breastfeed live on television in 1977.
For me, Buffy Sainte-Marie will always be beloved for her songs “Sometimes I Get To Thinking,” “The Piney Woods Hills,” and “I’m Gonna Be A Country Girl Again.” And that she wrote a single stanza in her most controversial song “My Country ‘Tis Of Thy People,” which I credit with awakening my political soul as a teenager in the 1970s:
“With a lump in your throat and a tear in your eye/ Can’t you see how their poverty’s profiting you?” 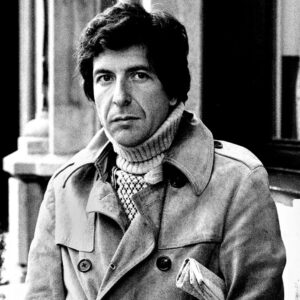 I won’t have space to go into detail for the third one, Leonard Cohen, who passed away in 2016 (on Joni Mitchell’s birthday!). But since he is so well known, I will just allude to and summarize him, starting with a quote about his most famous song.
“Hallelujah is one of those rare songs that survives its banalization with at least some of its sublimity intact,” said New York Times movie critic A. O. Scott. It’s been covered by around 200 artists, including the three most famous: John Cale, Rufus Wainwright and Jeff Buckley. Long before his death, Cohen said, “I feel I have a huge posthumous career in front of me.” And this has proven to be the case. For me, there are two short lyrics that have still a profound effect on me:
“From the wars against disorder/ from the sirens night and day/ from the fires of the homeless/ from the ashes of the gay/ Democracy is coming to the USA.” (Democracy)
“O lady with your legs so fine/ O stranger at your wheel/ You are locked

into your suffering/ and your pleasures are the seal.” (Stories of the Street)
The work of Leonard Cohen (Sept. 21, 1934 – Nov. 7, 2016) explored religion, politics, isolation, depression, sexuality, loss, death, and romantic relationships. He was inducted into the Canadian Music Hall of Fame, the Canadian Songwriters Hall of Fame, and the Rock and Roll Hall of Fame. He was invested as a Companion of the Order of Canada and also received the GOQ, the Order of Quebec, the Prince of Asturias Awards for literature and the Glenn Gould Prize. [Excerpted from Wikipedia.]
In his 82 years, Cohen produced 15 studio albums, several compilation albums, nearly 20 books of poetry and three novels, and appeared in numerous films and videos. His three songs on filmmaker Robert Altmann’s 1971 masterpiece “McCabe and Mrs. Miller” are integral to the film. And all this despite having a five-year hiatus in the 1990s when he only got ordained as a Buddhist monk. You can learn more about Cohen from CDs, DVDs and books published toward the end of his life and posthumously, including the film “Hallelujah: Leonard Cohen, A Journey, A Song,” his book, “The Book of Longing,” and the audio CD “Live in London.”