Sinema’s great moment of fame came when she emerged as one of the principal architects of the bipartisan infrastructure bill. She suffers under the self-aggrandizing delusion that without her it wouldn’t have passed. It was a budget bill. It only needed 50 votes plus Kamala to pass. It would have passed easily without Sinema’s huffing and puffing. The progressives in the House held up the bill, wanting to pass a mightier addition to it. Sinema assured the progressives that if they passed her bill, she would support their version. She didn’t, it failed, and we had to wait until this year and Joe Manchin’s reluctant support to pass it as the Inflation Reduction Act. 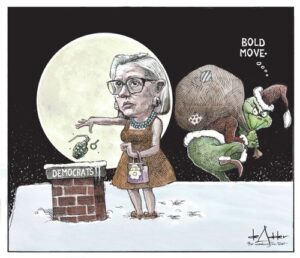 Sinema announced her decision as though it were a just pronouncement from the gods, and now she hurries into a perpetual vanishing.
In the sharp political divide of contemporary hyper-partisan American politics there is little room for a shameless opportunist caught in the disappearing middle.
Ruben Gallego, congressman from Phoenix, has been running against Sinema for two years, ever since she voted with Manchin to sink the sinking of the filibuster. She can count. There’s no way she could get the Dem endorsement or even win a Dem primary. She thinks she’s Lisa Murkowski. But Arizona isn’t Alaska. There is very little middle ground in highly partisan Arizona. The Trump trials will eat up all the oxygen in two years. Republicans will be in full retreat (caution: the author is a pathological optimist).

On the coup d’état by Castillo in Peru:

My understanding of the social contract is that we agree to settle political questions democratically through elections. When someone rejects the decision of the voters, they reject the constitution that binds us together. When they throw out the constitution, when they try to rule by decree, whether they are Donald J. Trump or a German prince or President Castillo, they are robbing us of our future—a world owned and operated by all the people who live here.

The elections in Taiwan:

The election of Chiang Wan-an, the new Taipei mayor, the Nationalist great-grandson of Chiang Kai-shek, will probably signify nothing. It’s a lot of Nationalist shouting after Pelosi’s visit (a visit probably sponsored by Nationalist supporters in San Francisco who have supported Nancy all these years).
In terms of China/Taiwan relations, there is a strong material basis for not rocking the boat so much that someone falls overboard. Taiwan’s top trading partner is mainland China – $126.2 billion (28.2% of Taiwan’s total exports). The U.S. is a distant trading partner with Taiwan with just a little more than half that amount: $65.9 billion (14.7%).
Taiwan is one of the biggest investors in China. Between 1991 and the end of May 2021, approved investment in China comprised 44,577 cases totaling $193.51 billion.
But, according to Bloomberg: “Confidence is running low particularly among international investors. They pulled a record $2.5 billion from mainland stock markets on Oct. 24.”

Mao led revolutions against the Party leadership every 10 years—let the grassroots burn the structure from the bottom to the top. On the Long March in ‘36 to stop Stalin from running the revolution by telegraph; in ‘46 to Rectify the Party’s style of work—see William Hinton’s “Fanshen”; in ‘56 Let a Hundred Flowers Bloom—intellectuals, sit down and listen; in ‘66 the great proletarian cultural revolution.
Mao died in ‘76. A month after his death the Gang of Four were arrested: https://en.wikipedia.org/wiki/Gang_of_Four.
1989 Tiananmen Square protests.
Umbrellas in Hong Kong, and now, this.
It’s wonderful. It seems spontaneous, but it means that consciousness and communication are at a very high level among Chinese youth.
I wish Bernie and AOC had a million ultra-leftists hungry for organizing and action who wanted to go back to the land and educate and socialize people in small towns. Have you read Ai Weiwei’s “1000 Years of Joys and Sorrows?” It’s a horror tale about his father dragging him and his family through hell in his fanatical Maoist crusade to bring literacy and reduce “the idiocy of rural life.” It was a heroic and humbling experience.
We need a lot of young people today to go into these small towns and expand the range of possibilities.
Broadband funding in the Biden bill will help reach some of the more remote areas.
If it’s just a small group watching Stephen Colbert, it could get to look a lot like Berlin in the ‘30s and Weimar Germany. We need to make sure everyone is in on the joke. Their argument is the fundamental Nazi argument that cosmopolitan city people are a danger to your purity.
The Cultural Revolution was an extremely chaotic period.
In the summer of 1966 at the Party Congress at a Yangtze resort, the leadership told Mao, “What does it matter the color of the cat, as long as it catches mice?” as their justification for being capitalist roaders. Mao went down to the river, jumped in and when he reached the other shore said two things:
“Nieh Yuan Tzu was right.” She was a low-level administrator at Beijing University. She wrote a big character poster that criticized the structure and values of the university that seemed to be creating a new aristocracy of the Party elite’s sons and daughters rather than educating workers and peasants. She was being widely condemned.
“Bombard the headquarters!” This was a call for the grassroots to hold Party leadership accountable. “Question authority.”
That seemed to fire up a new generation.
There were tremendous excesses. Lots of mistakes. People were harmed. But almost everybody got to the other side.
Was it worth the trip?
We’ll know in a thousand years.
I think there is a deeper revolutionary consciousness in China. I think the Russian Revolution was a successful coup d’état, as opposed to Trump’s amateurish attempt. The Chinese revolution was a long, dragged-out civil war, then a war of resistance against Japan, then a civil war again. Everyone knew what was at stake by the end of it.
I have some sympathy for Xi Jinping. Compare the value of human life in China versus the pro-life, anti-mask and anti-vax crowd in the U.S. “The COVID-19 death rate in the U.S. has now passed 340 per million residents, just over 100 times the rate in China.” But maintaining zero tolerance for 1.5 billion people was a difficult task.
I do think their strategy for development is extremely clever. They invite any capitalist to build a factory in China. They will help with land and a stable workforce, and all they ask is 51% of the property. When the capitalist leaves, the means of production belong to the Chinese.
They take a very long view.