Fly By Night will capture your heart 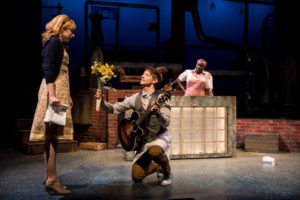 I wouldn’t go so far as to say that I HATE musicals, but they are definitely not my favorite genre. I’ve heard a lot of people say they don’t much care for musicals, so for that crowd I’d say, “Go see ‘Fly By Night’ at the Jungle Theatre.  You won’t mind at all that it’s a musical.” Indeed, it’s a very funny, touching story with a nicely surprising ending (if the story had gone where it looked like it was going, it would have been the proverbial flat pancake—but suddenly it didn’t). I laughed and cried a lot and overall it left me satisfied and delighted and really glad I went. The live rock band on stage is one of the strongest recommendations for the show. In addition there are the actors, with their superb comic timing and wonderful singing, the story itself, and the other-worldly theme.
The very first big song, the turtle song, performed by the passive, sensitive, hapless sandwich maker Harold (played by Chris Koza), kicks ass and absolutely defines his adorable persona. Most of the music in the show creates atmosphere and feeling about the characters’ lives, although a small portion of the music is used as filler and tries to simply inform the audience of what is going on. There was a musical stretch right after the intermission that seemed like it could have been skipped. Even there, I was happy to calmly wait for everything to pick up speed again.
When we started off with an omniscient narrator I was dubious about his slightly overcooked lines explaining how deep, profound and meaningful the story was going to be. At first I was dismayed that we were expected to rely on someone to navigate the story. (I was thinking, “Not only is this a musical, it’s got a narrator besides.”) After that, though, further references to cosmic connections in the universe were welcome and moving. They made me truly imagine the invisible world and the mysterious connections among us humans in all our many-splendored forms. The versatility of the narrator (Jim Lichtscheidl) as he fleshed out numerous other characters as well, was astonishing. The omnipresent voice of the all-knowing narrator actually turned out to be necessary, to depict the idea of unseen forces accurately. Part of the time I felt that I was watching from outer space, from the stars.
The sisters from South Dakota, Daphne (Royer Bockus) and Miriam (Leah Anderson)—the first extroverted, overly dramatic and determined to make it in the Big Apple, the latter introverted, thoughtful and soft-spoken—amid much hilarity show a deep love and loyalty to each other and very unique attractions to the weird Harold.
Minor character Harold’s dad (James Detmar) is a mystery throughout the story. You wonder why he is there. But at the end, there is a satisfying closure for his thread of the storyline. Crabble, the boss at the New York City sandwich shop (Joy Dolo), is pretty funny with her lightbulb issues, and Joey Storms, the distracted, perfectionistic, hyper playwright (Joshua James Campbell), played his part, well, to perfection.
There’s something at the core of this production that makes the whole thing work magnificently, even with all the things that don’t work. Does that sound like a metaphor? Go with someone whose company you especially enjoy. You’ll see why when you see the show.

Jungle Theater is located just northeast of the corner of Lyndale Avenue and Lake Street. “Fly By Night” runs through July 23.