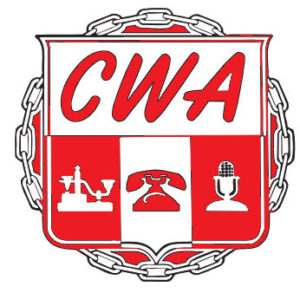 On Friday, May 19, Communications Workers of America (CWA) announced that negotiations had broken down with AT&T Mobility after management failed to provide their workers with a contract with fair wage increases and adequate healthcare protections. In response, and in an era when hand-wringing over the state of organized labor is at an all-time high, CWA decided to call a weekend-long strike at AT&T call centers and storefronts in what is estimated to be the largest national retail strike in American history. The Twin Cities chapter of Democratic Socialists of America (DSA) stood alongside the picketing workers in solidarity, chanting and marching in front of the AT&T store in Calhoun Square.
“AT&T is a very powerful corporation, they have a lot of lawyers,” Kieran Knutson of CWA told strikers and supporters, “but the thing we have to keep in mind is that the reason they are so big and so rich is because of all the work we do. There’s not a single dime or a single dollar they would make without working class people.” Interspersed through Knutson’s speech, car horns honked in solidarity and the strikers responded in kind with cheers and shouts. “If we decided to organize ourselves and use our muscle, we’re going to start turning the tables.” Ian Ringgenberg of DSA chimed in with support, “If you guys go on strike, we’ll be out here again with bigger signs.”
“Leadership was led to think we wouldn’t be on strike. But every store walked off—almost every AT&T Mobility employee in the State of Minnesota,” said Tyler Jolly, a CWA member and AT&T retail sales consultant of 13 years.  “This contract covers mobility call centers as well—including DirecTV, which AT&T just purchased for $52 billion … They’re taking in a billion dollars a month in profits. They’re also refusing to negotiate on commissions, meaning that they would keep control of how much commission salespeople make, even if everyone is rushing to buy a new iPhone.” Behind Jolly, the picketers chanted loudly: “What do we want? A contract! When do we want it? Now!”
“This is the first ever AT&T Mobility strike in history. This is a warning shot [to management] that we have power and we’re ready to go,” said Jolly. “We have to stick together and support unions and organize more. Even right now we could organize other mobility companies.”
Unions have stood on the forefront of fighting for the average Joe, from normalizing the 8-hour workday to championing paid parental leave and fair wages. Here in Minnesota, we inherit the history of union struggle in the Teamsters Rebellion of Minneapolis and the 1985 strike at the Hormel meatpacking plant in Austin. But far from being a relic of the past, unions are still fighting and winning in our neighborhoods and streets—as evidenced by CWA’s willingness to stop work to win a fair contract. Elsewhere in the Twin Cities, workers everywhere from the Franklin Street Bakery to the University of Minnesota are getting together and uniting for better wages, treatment and jobs.
True democracy cannot exist without a strong labor movement and strong unions. When a boss decides to slash wages, cut benefits, or fire unjustly, where is the recourse for workers? Sadly, it’s not in the current political environment, where corporations buy politicians and build a nationwide right-to-work agenda. DSA stands for another possibility: where workers have as much power as the corporations; where decisions previously left to gigantic corporations and investors are instead part of our democratic political process. But first, the struggle must happen on the shop floor, between workers and management. CWA’s call to strike at AT&T this last weekend showed that the union power hasn’t gone anywhere—you just have to get together.
For more information on the CWA at AT&T, visit http://goodjobsatt.org/. For more information on the Twin Cities DSA, visit http://www.twincitiesdsa.org/
“We have to stick together and support unions and organize more. Even right now we could organize other mobility companies.”