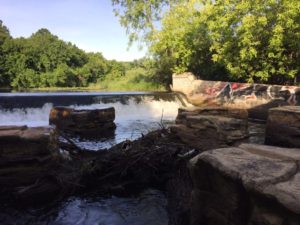 It seems nothing can stop them from closing Hiawatha Golf Course in a couple of years.
At a public meeting late last month, Michael Schroeder, the assistant superintendent for Planning Services, told an anxious crowd of more than a hundred golfers that the course would be open next year and maybe even for the 2019 season. But they don’t want to continue pumping water out of the course indefinitely because they’re pumping more than the DNR permit allows, so the plan they will be presenting to the Park Board is to close the course.
The problem is that the water level of Lake Hiawatha is 812 feet about sea level, and that is actually higher than some of the fairways in the golf course, which are only 810 feet above sea level.
Two things have caused this problem: There is a dam (or weir) at the outlet of Lake Hiawatha into Minnehaha Creek at 27th Avenue that is holding back at least 2 feet of water and another on the Creek at Hiawatha Avenue near the south end of the tunnel at 49th Street that is holding back 4 feet of water, and the golf course is sinking.
There is another dam on Minnehaha Creek between Lakes Nokomis and Hiawatha at about 19th Avenue that is holding back at least 2 feet of water in Lake Nokomis, and that’s raising the water table in that community and damaging more than a dozen homes. The dam at the outlet of Lake Hiawatha is also creating flooding in neighborhood basements.
The dams were put in at the suggestions of Minnesota’s most famous statesman, Hubert Humphrey. When he was vice president he wanted to impress President Lyndon Johnson with the scenic beauty of Minnehaha Falls, but the Falls was going through a dry period, so Humphrey had the Park Board put in dams to back up the water so it would have a mighty flow for Johnson. The dams are still there. There was never a good reason to build them, and, if removing them would lower the water table by 2 to 4 feet, then, there is an excellent reason to take them down.
Hiawatha Golf Course was begun in 1929. Theodore Wirth dredged Lake Hiawatha and used the fill to create the fairways. Over the years the fairways have settled. The Lake was 33 feet deep after Wirth dredged it. Since that time the large storm sewer off of the second fairway has been dumping sand, silt and debris from street storm sewers all the way from Lake Street to 43rd Street and from Chicago Avenue over to 28th Avenue into Lake Hiawatha. Today the depth of Hiawatha is only about 11 or 12 feet.
It’s time to dig the debris out of Lake Hiawatha and dump it on the fairways that are sinking.  This would purify and clarify the lake. Added depth would allow the water to filter debris that can’t be done in shallow water. And the tons of fill from the lake could raise the fairways by at least a foot in the lower areas.
Wouldn’t lowering the lake by 2 to 4 feet and raising the fairways by 1 foot be enough to reduce or eliminate the pumping?
The dams could be removed without much trouble or expense, and the lake is due for a dredging if people want to use it for swimming.
Aren’t these possibilities worth considering before we decide to close a “legendary golf course”—according to a study of Minneapolis municipal golf courses by Convergence Golf in 2014 that ranked Hiawatha the best and most potentially profitable of the city’s courses.
Isn’t it worth respecting what Hiawatha has meant to the local black community? The annual Bronze Tournament was the first African-American golf tournament in the country. At its premiere, according to local legend, Joe Louis, the Brown Bomber, sent a golf ball through the picture window of a house across 43rd Street with a five iron on the third hole.
The golf course doesn’t use a lot of dangerous chemicals. It uses a fungicide once every two weeks on the greens.
Yes, Hiawatha should be more open to the community. When I was growing up around Hiawatha there were open gates in the fences and people could walk or jog around the Lake.
Some people want to plant fruit and nut trees. Why not? Let’s try it out and see what happens.
There’s a First Tee program to introduce young people to the sport. The driving range and practice area are in use as early as 6 a.m.
Golf revenues for all the courses in 2015 were $4,786,526. Expenses were $5,081,284. Golf lost $294,758, about 6% of its budget, and that had to be made up from the General Fund. Skiing had revenues of $118,448 and expenses of $823,682. Skiing lost $705,234, about 85% of its budget, and that had to be made up from the General Fund. Nobody’s talking about doing away with skiing because they lost money—or baseball, tennis or soccer, for that matter.
It sure would be nice to see someone on the Park Board stand up for the Hiawatha Golf Course.
We asked candidates for Park Board what they thought about the problems at Hiawatha. Bill Shroyer responded:
“The historical aspects of Hiawatha Golf Course are another reason that options to closing must be considered. The importance to the black community, youth introduction to the sport, and the affordability to city residents are valid points to be considered. PLUS it made money until the profits were stripped and used in other parts of the Park Board. Even the flooding aspect is deceptive. Who is the Park Board to lecture about the water table and pumping when they were the party Doing the Pumping? Without monitoring the volume. And of course when the unstable West River Parkway collapsed (was it monitored for water vulnerability?) the Park Board received more than $5 million from FEMA. NOW FEMA wants its money back!!! The board didn’t do the paperwork correctly.
“Golf at Hiawatha would be possible as a nine-hole premiere. It would be profitable too, if done right.”

PHOTO CAPTION: The Hiawatha Weir at 49th Street and Hiawatha Avenue, just before the south end of the tunnel, holds back 4 feet of water that contributes to flooding in South Minneapolis.