Are we supporting right-wing terrorism? 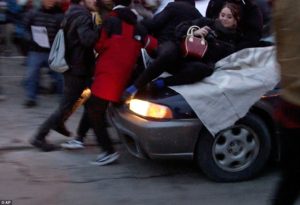 “On Monday evening, Nov. 24, the week of Thanksgiving, the St. Louis County prosecuting attorney released the findings of the grand jury in the case of Officer Darren Wilson’s shooting and killing of Michael Brown in Ferguson, Mo. As expected, the grand jury chose not to indict Wilson, and, predictably, there were massive demonstrations against police brutality across the country on Tuesday, Nov. 25, 2014.

“Jeffrey Patrick Rice, 40, driving a blue Subaru station wagon, pulled up behind the white van. Instead of detouring around the van to the left, Rice drove into the right turn lane and directly into a crowd of demonstrators. He bumped them, hit them with his car and knocked them down. He drove over the legs of a 16-year-old demonstrator. He stopped. Demonstrators beat on his car to stop him from driving his rear wheels over the demonstrator. Rice drove forward again, hitting more demonstrators. Breaking free of the crowd, still in the far right lane, he almost collided with another car in the intersection. He changed lanes in the intersection and continued driving down Lake Street to St. Paul. He called 911 to report damage to his car from the demonstrators. The police came. In their initial report the police called Rice the victim in the incident.”
(https://southsidepride.com/demonstrator-hit-by-car/)

“The motorist who slowly drove through a throng of protesters in a South Minneapolis intersection and slightly injured a teenage demonstrator pleaded guilty Friday to one misdemeanor and had two other misdemeanor charges dismissed.

“Jeffrey P. Rice, 41, of St. Paul, was fined $575 and ordered to attend a driver’s education course within six months for failure to yield to a pedestrian.”
(http://www.startribune.com/motorist-pleads-guilty-to-mis…/…/)

“A Hennepin County judge sentenced Lance Scarsella to 15 years in prison for shooting five protesters near the 4th Precinct in 2015. The sentence means Scarsella will likely spend about a decade behind bars.

“He and several others showed up at a protest over the Jamar Clark shooting. It was Scarsella’s second time at the protest after showing up several days before with a friend. Protesters confronted the group over their masks, but the group refused to remove the masks and protesters followed them.

“Cameron Clark, shot twice by Scarsella, spoke both inside and outside the courtroom.

“‘I wanted to hear the truth. You’re racist. You and the other people charged. You don’t like black people. It’s just that simple,” he said. “You showed up. You made a video, you lured us up the street and you fired eight shots.’

“Inside the courtroom, Clark told the judge the shooting ‘changed my life,’ and that he still has nightmares.

“Clark and his grandfather James Clark, the father of Jamar Clark, expressed strong disapproval of the sentencing, believing Scarsella deserved a harsher charge, such as murder.”
(http://www.fox9.com/news/250819768-story)

And if they catch the people who threw the bomb into the mosque in Bloomington the authorities will probably dismiss the act as the foolish prank of adolescents: “After all, nobody got hurt,” unless you calculate the chilling effect of terror on the Muslims who were targeted.

Isn’t it time to begin to take these right-wing terrorist acts seriously?

Minneapolis has a sordid history in dismissing these acts and, thereby, encouraging them. County Attorney Mike Freeman should have prosecuted to the fullest extent of the law Jefferey Rice who deliberately tried to injure or murder pedestrians, and Lance Scarsella for trying to murder demonstrators, and the police officers who killed Terrance Franklin and Jamar Clark.

Because we have accepted that racist violence we have all become accomplices in the murder of Heather Heyer by James Alex Fields in Charlottesville.

If the history 0f the Nazi movement in Germany in the 1930s is in anyway instructive, then we should remember Hitler used the right-wing violence against left-wing demonstrators as the excuse to round up leftists and send them to concentration camps.  In much the same manner, Trump, at first blamed extremists on both sides in the hopes that his police could then move in and restore order.