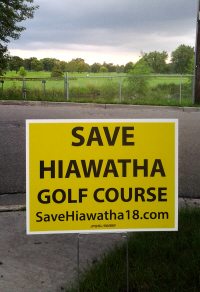 Earlier (in the Whereas part of the resolution) the staff cite the engineering authority they say justified closing the course.  The resolution said, “Whereas, The MPRB engaged Barr Engineering Company (Barr) to investigate conditions related to groundwater pumping and its effects on Hiawatha Golf Course and surrounding properties, and the City of Minneapolis (City) engaged Barr to investigate storm water conditions in the areas surrounding and including Hiawatha Golf Course, and both agencies engaged Barr to develop alternatives for water management that would consider a range of groundwater pumping scenarios; Whereas, Barr prepared a series of water management alternatives and in concert with MPRB and City staff performed an initial screening of alternatives that identified two alternatives for more thorough assessments of property impacts, regulatory approval potential, water quality.”

Remove the dam and you lower the water level of Lake Hiawatha.  That’s pretty elementary physics.
But the critic says, “We’ve wasted enough time and money on them and their damned mindless activities.”

The 2014 Golf Convergence Study of Minneapolis municipal courses (commissioned by the Park Board) said Hiawatha was the course most likely to make money because of its location, and within a five-mile radius there are more than 8,000 active golfers.

Hiawatha opened in 1934 and from its beginning it was open to everyone in South Minneapolis.  Blacks, Latinos, Asians, South Asians, Somalis—all play at Hiawatha.  In 1939 Hiawatha hosted the first African-American golf tournament in the country, the Upper Midwest Bronze Amateur Tournament.  Blacks were not admitted as members to Augusta National, the home of The Masters, until 1990.  Women weren’t allowed as members at Augusta until 2012.

It’s not closing because of the money.  Of all the city courses it could be the most profitable, and it has contributed money to the general fund to finance other sports activities for most of its existence.

One of the newer legends at Hiawatha Golf Course is that before the great flood of 2014, Park Board Commissioner Steffanie Musich brought her family out to play golf on a Sunday afternoon at Hiawatha.  They had clearly never played before and they were holding up play.  Tee times for foursomes start every eight minutes.  A Ranger went down and threw them off the course and refunded their money with tokens for the driving range.  So, when the flood came and the course flooded, many people at the golf course believe, Musich must have thought, “This is a great time to get even.”