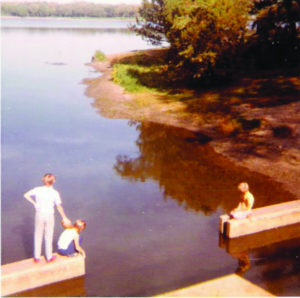 Mullin is not just an ardent supporter and a neighbor, he’s also a former employee with Barr Engineering.  He’s well acquainted with their engineering study of the golf course and its conclusions.
At its Aug. 9 meeting, the Park Board voted 6 to 3 to stop pumping water out of the Hiawatha Golf Course by the end of the season in 2019.  That means the course will be flooded because of the dam holding back 2 to 4 feet of water at 27th Avenue.  Rather than take down the dam, the Park Board has decided to take down the golf course.

Meg Forney, Jon Olson and Annie Young were the commissioners who voted against stopping pumping and, thereby, voted to keep the 18-hole golf course open.  Forney is the only one running for re-election as a park commissioner at-large, for one of three positions representing the whole city.
It will be a two-year process to turn off the pumps and close the course, so there is hope that a new Park Board elected this fall could change this decision and save the course.

If Shroyer can win in the 5th District, and if Forney and Casserly can win citywide, and if Fine can win in the 6th District, then in order to change this decision, supporters of Hiawatha golf would just need one more vote to get to five votes and a majority on the new Park Board, and, then, they could overturn this decision to close Hiawatha Golf Course by this season’s flock of lame ducks.

Southside Pride will continue to monitor the electoral landscape and report on the prospects of keeping golf at Hiawatha.

We sent a One Question Questionnaire to all candidates running for Park Board: Southside Pride is very interested in your position regarding Hiawatha Golf Course. Would you support keeping the 18-hole course?

Meg Forney, the only at-large incumbent running for re-election, answered: “Yes, I did not support the resolution to reduce groundwater pumping at Hiawatha based on three reasons.  Although I respect our park staff and Barr Engineering’s analysis, I am still optimistic that a resolve can be found.  Secondly, Hiawatha is a revenue producer—note please: It is not a profit maker.  But contrary to other assets in the park system, Hiawatha has helped to sustain itself. The impact on the taxpayer needs to be seriously weighed. Lastly, the fact that the Bronze Tournament originated here gives it historic importance. Since 1959, this tournament has been taking place in Minneapolis, started because of racial barriers for African-American golfers. In a time when there are so many racial disparities, the impact of loss of this community asset is profound.”

Charlie Casserly, another at-large candidate, wrote: “Yes, I do support keeping Hiawatha at 18 holes. That’s what I want, the current 18-hole championship format.

“Ed Felien is absolutely right about the dam/weir at the outlet of Lake Hiawatha into Minnehaha Creek. I’ve attached a scan of two photos of it.

“Here I am, standing on the dam in 1974 after it was installed, along with two of my siblings. The water level is more than a foot lower than the top of the dam. (I grew up a stone’s throw from the outlet on 27th Ave.)

“Today, and for decades, the top of the weir is well under water, even during drought years. The lake level has risen artificially, there can be no doubt of that.

“If the watershed district likes to keep water flowing in the creek, that’s an admirable goal. Perhaps it is ‘unsustainable’ to do so. If we remove the dam/weir, the creek may run dry again as it did in the past, between rains. I can live with that.

“Let’s find a solution, or solutions, and save Hiawatha Golf Course.” Those are the three responses we have received from the three at-large candidates. There are three open slots. You can vote for all three.

There are three candidates running for the Park Board seat from District 3, which includes all of the Phillips/Powderhorn delivery area. Two candidates responded to our One Question Questionnaire: