Our Revolution meets in Alexandria 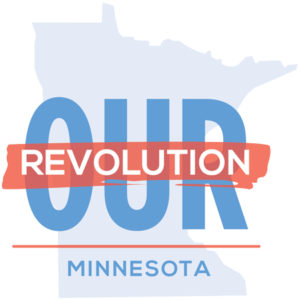 After the election last November, the national Bernie Sanders Campaign launched an effort to start a national organization to continue the work of the millions of people who supported Senator Sanders. This organization, called Our Revolution (OR), was received well, and activists enthusiastically started chapters all over the country. A meeting in the Twin Cities with several hundred people in attendance was held and a Twin Cities OR was formed. Sometime later, another group calling itself OR Minnesota was also formed. Unfortunately there was discord between the two groups. There were lawsuits over who had the right to the name and logo, and there were charges that mailing lists, and online lists were appropriated. The dispute got very ugly.

The Minnesota OR, which was chaired by Travis Thompson and a volunteer board, was trying to organize in the state. They had several successful chapters, and several candidates ran for local and legislative seats under that banner. In an effort to solve the dispute, and bring accountability to the organization, a founding convention was called for Alexandria, Minn., on Saturday Sept. 16. I attended the convention.

It was exciting. There were several hundred people gathered in what used to be a movie theater, and the agenda, which called for election of a board of directors and several educational programs, was distributed. The first panel was made up of people who had run or were currently running for office. There was a lot of interest in a candidate for the Duluth City Council who had survived the primary and was campaigning hard in Duluth. I was glad to meet this energetic and intelligent young man. I was feeling good.

Then trouble started. A South Minneapolis friend, whom I had worked with on the Alondra Cano campaign named Nick Espinosa, arrived. We embraced when we saw each other, but he was quickly shuffled into a back room. What I didn’t know, and later found out, was that he was not welcome. The former ad hoc board had banned him from the convention and from running for the board. He had decided to attend anyway, feeling that the banning was unreasonable. He was supported in a letter by a large number of the Twin City OR activists.

The group was stunned when the police were called and he was dragged out of the theater and arrested. People demanded to know why. The leadership of the convention was unwilling to explain anything, and it took quite a lot of talking to get any idea. I went to Travis Thompson and asked him for an explanation. I was told to get out of his room backstage or I would be arrested also. I walked onto the stage and people were yelling for an explanation. None was forthcoming; the leadership said we were breaking for lunch.

I went over to the Douglas county jail and was told that Nick was indeed in custody, and that he would be held until Monday when a judge would decide on bail. No one was allowed to visit him. There were lots of rumors about all kinds of nasty things that Nick was accused of, but again, no response to the members from the leadership, no actual accusers. I found out that he was a party to the lawsuit over the logo, and that there were other charges, which I will not repeat here, as there was never any valid information about them. I contacted people that knew Nick in Minneapolis, and although there was dismay, I didn’t really get any reliable information.

In spite of this terribly-handled situation, the meeting stayed disciplined. The board elections were held, and a couple of the people who had signed the letter objecting to Nick’s banning were elected to the board.

There was also an excellent presentation on Universal Health Care led by Annie Jones from Rochester and Senator John Marty of Roseville.

I drove home in the rain.

I don’t know what to think at this point. I am hopeful that the organization will pull itself together; the new board seems to be serious and committed. Since Mr. Thompson left the gathering during the lunch period, the remaining people urged the group to get Nick released. The management of the venue did finally tell the police that they would not press charges, and so, as I was driving home, I received a text message that Nick was released. I am glad about that.

Nick says that he believes the whole thing was related to the dispute between the two OR organizations, and that it will be resolved by the new board. I still have not been able to get a statement from anyone who supported the banning and arrest of Nick.

Nick commented on his Facebook page: “I know there are still conflicts within our group that need to be resolved, and I’m committed to doing my part to resolving them in a democratic and restorative framework.

“Thank you to everyone who called to make sure I got out tonight, to those who made the trip to Alexandria from all corners of the state, to everyone who voted online, and to those who are ready to work to build a unified progressive movement across our state that has the potential to change the course of history.”