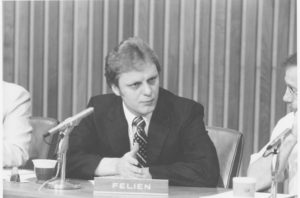 Before the Open Meeting Law, politicians decided destinies in smoke-filled rooms. Of course, that was also before the laws against smoking indoors.

After the election, I was invited by Louis DeMars to a meeting at the Leamington Hotel to organize city government: free food, free booze, lots of cigar smoke and a chance to meet all the other DFL elected City Council members. The council was going from a lop-sided Republican majority to a 12 to 1 majority of DFLers. I was starry-eyed and filled with hope.

Louis had it all figured. He would be president of the council, and he kept the major committee chairs for his buddies on the northside: John Derus (4th Ward) got majority leader and chair of Ways and Means; Dick Miller (3rd Ward) got Zoning and Planning; Sam Sivanich (1st Ward) got vice president.

Sam was a wonderful character from Northeast Minneapolis. He had been on the council for a number of years and for many of them he had been outnumbered by Republicans 12 to 1. Representing the 1st Ward, he was the first to vote on a roll call issue, but he was never sure what the issue was because the Republicans wouldn’t always tell him, so when it came time for him to vote, he’d say, “Pass,” until he could figure out how to vote. The only change Sam wanted for our council was to rotate the call so he wouldn’t have to be first all the time. After about six months of this, when the rotation finally came back to him, he said at a council meeting, “Eddie, you should be very happy. Today we have achieved a complete revolution.” I was pleased that Sam thought I was a revolutionary, but I think he knew that wasn’t exactly the revolution I was hoping for.

Louis announced we were going to appoint Walter Duffy as the new city attorney, and he would appoint new heads for the Civil and Criminal Divisions. The head of the Criminal Division had been especially punitive in prosecuting anti-war protesters. He was replaced and assigned to prosecuting slumlords.

After about a year, Walt came into my office one day and said, “We’ve prosecuted four officers for use of excessive force, and we got two convictions.” This was a profound change. This changed the way the police acted—especially toward minorities. The cops knew that if they screwed up there would be consequences.

The Minneapolis Civil Rights Commission had tons more power than any subsequent civilian reviews. That’s why they killed it. The MPD had powerful friends in the Minnesota State Legislature. [Ray Dehn told me recently that the power of the city was pre-empted by the state. The state was saying and still says that we no longer have the right as citizens of Minneapolis to bring complaints about the violation of our civil rights by the police to the attention of our Minneapolis Civil Rights Commission. That doesn’t make sense. That has to change.]

I saw Walt one more time after I left City Hall. I had been working with striking cab drivers. We had a party one night. I made up a song for the occasion. Here’s a part of it:

Ellen Hawley was a woman in our union
She was on picket at Blue and White
A scab came out of the driveway
And he got her in his sight
She jumped up on the hood of that cab
He tried but couldn’t knock her down
She pulled off his windshield wipers
And got a free ride across town.

We had another beer and they made me sing the song again. I went home. They went downtown to picket in front of the Nicollet Hotel. Four of them recognized the guy in the Blue and White cab in front of the Hotel as the guy from the song. They pulled him out of the cab and threw him through a plate glass window. They were arrested. I was called. The next morning I went down to talk to Louis. He called Walt into his office. Walt lectured me about the bad behavior of my comrades and then released them in my custody and dropped the charges.

I drove them back to strike headquarters to get their cars, and I got to listen to them argue about what was the shortest route and what was the fastest street and “who I had in my cab lately.”