CONFESSIONS OF AN UNREPENTANT MAOIST: Downzoning 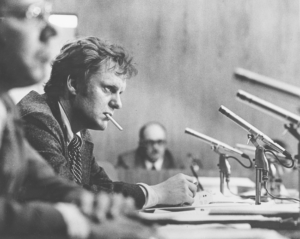 In 1970 I was publishing Hundred Flowers, a weekly underground newspaper, an anti-war, anti-racist, early feminist, psychedelic fun rag that sold for a quarter.

Some people were having a demonstration somewhere on Harriet Avenue protesting the demolition of houses to make room for a two-and-a-half story walk-up apartment building. I grabbed my two-dollar camera and went over. About six or eight of them had been occupying one of the abandoned houses. I went in and talked to them and then went outside and stood with the group of about 20 supporters. When the police started a rush on the house to arrest the occupiers, I lost my cool. I said to the group, “We’ve got to support the guys inside,” and then two cops grabbed me and took me downtown in a police car after being photographed. [It’s the photo that’s used on the website for the “Confessions” series.]

I was hauled downtown and booked for disturbing the peace. I had to call back to the Hundred Flowers Commune for someone to come down with $25 to bail me out. Charges were dropped at the trial, and the $25 was returned.

I didn’t know it at the time, but I was part of a protest against zoning. The city has the power to decide what density of houses and what kind of businesses belong in a neighborhood. On Harriet Avenue and in most of South Minneapolis the R-1 and R-2 zoning that allowed single family homes and duplexes had been changed to R-4 and R-5, which allowed much greater density.

In the early ’70s I was part of a community organization called Model Cities. We had monthly meetings and discussed community problems. We decided that the solution to the problem of speculators coming into a neighborhood, buying up three houses in a row, tearing them down and putting up a two-and-a-half story walk-up, was downzoning.

That was part of my campaign during the election—downzone the neighborhoods to existing usage.

So, the first thing I did as a newly elected City Council member was to present a plan to the Zoning and Planning Committee to downzone every neighborhood in our ward to existing usage. It was done and it worked.

Zoning is a problem today for people in the Glendale Public Housing Project. Developers want to move out the mostly people of color, tear down the existing homes and triple the density. The residents object. They say, “ ‘unconscionable’ clearly characterizes any proposal to demolish our community, and replace it with a privatized, gentrified and densified development against our will for the luxury of wealthier white community and the developers who will make millions out of our displacement.”

Council Member Lisa Goodman, when confronted with an attempt to increase density and change the nature of a neighborhood in her Uptown/Kenwood ward, said, “When you buy a house, which is your single biggest investment, one of the things that you take into consideration is the location and what the neighborhood looks and feels like surrounding you. To upend that and make a dramatic change without the neighborhood and neighbors agreeing to it is, I think, unconscionable.”

The Defend Glendale & Public Housing Coalition says, “Does the standard of concern expressed by this City Council leader not also apply to Minneapolis tenants (who are disproportionally persons of color and those who reside in public housing) or only to homeowners (who are disproportionately white)?  This is an important question that Minneapolis will have to face and answer correctly. Under Lisa Goodman’s push and direction, the Minneapolis Public Housing Agency (MPHA) moves toward ‘redevelopment’ of Glendale Townhomes (184 units of family public housing) by privatizing, selling and  demolishing Glendale  against the will of its residents. MPHA will be  replacing  Glendale with private developer-owned ‘mixed income’ housing that increases the density of Glendale housing times three and superimposes a large majority of much higher-income residents onto the Glendale  site, displacing 600 low-income  residents totally and permanently changing the character (‘look and feel’) of the historic Glendale Townhomes and its community that has been home to low-income families (predominantly families of color: African Americans, refugees, immigrants, Somalis, Oromo, Hmong) since 1952.”

Lisa Goodman was right about her neighborhood, but wrong about not granting the same right of self-determination to others. I have confidence the people of Glendale will survive.

I believe strongly in community corrections and in half-way houses to keep offenders out of jail, but South Minneapolis in 1974 was being flooded with half-way houses. Every other neighborhood was NIMBY—Not In My Back Yard. Criminals existed in all areas of the Metropolitan area, but the houses of transition were all in the inner city. So, I proposed a change in the zoning code that would not allow a half-way house within 500 feet of another half-way house. That stopped the institutionalization of neighborhoods.

A few years after I left the City Council I was talking to Brian Coyle, then City Council member from the 6th Ward, the other inner-city ward, and he told me he was concerned about half-way houses moving into neighborhoods. I told him about my zoning ordinance. He’d never heard of it, but he was happy to learn there was one wheel he didn’t have to re-invent.

The zoning code is the key to understanding and fighting gentrification. Developers can’t come into a neighborhood and change it so the people who live there can no longer afford it, unless the City Council member agrees to it. It’s up to all of us and our neighborhood organizations to watch for changes to the zoning code that could result in our own extinction.

“The price of liberty is eternal vigilance.”  [Attributed to Thomas Jefferson]