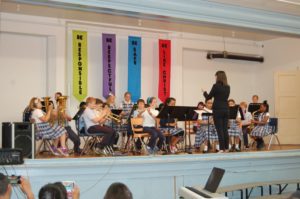 There’s a special place in heaven (or, at least in my heart) for people who make music a reality in the lives of children. Such people are found at St. Helena Catholic School, a PreK-8 in South Minneapolis.

The music program at St. Helena isn’t what it used to be—it’s much better, thanks largely to the new talented and comprehensive music teacher Whitney Lussier, and to the efforts of former student Henry Warwick, who was able to acquire a ton of band instruments for the school, about 20 of them. In the past, students had to rent band instruments and had instruction only once a week, through the Schmitt Music Company’s “Strike Up the Band” program. Now, since the fall of 2015, no student has to rent an instrument. Fourth through eighth graders just sign up and join the band. They now have a teacher that works with them individually or in small groups during the week and once a week all together. “Everybody who wants to play gets to play,” exclaims Principal Jane Hileman. This is especially wonderful since renting an instrument would be a hardship or worse for those students who are receiving financial assistance, which is well over half of the 185 children enrolled. And for families who pay full tuition it could also be a challenge to add one more expense. 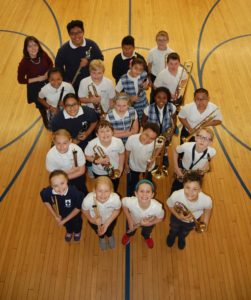 Anyway, now the rental problem is solved. It took a lot of planning and leadership to gather all the instruments. To earn his Eagle Scout rank, St. Helena graduate Henry Warwick decided to collect musical instruments for the band program. He already played the trombone (which he continues to play in the band at the University of Minnesota in Duluth where he is now a freshman) and had taken piano lessons in elementary school. So music-making was exciting and familiar to him. The project spoke to him. Hileman said, “He put his heart and soul into something that he loved.”

Henry worked with a volunteer to put a request for band instruments on St. Helena’s website wish list. He distributed flyers in the neighborhood asking for old band instruments. He put ads in the parish bulletin, and last but not least, he put up a tent in the parking lot of the Oxendale Market on 34th Avenue with signs explaining his project and asking for old instruments.  The response was heartening. Many people went home and were back in a few hours with an instrument, including an accordion and a bass guitar with amps—a chance to redefine the band, perhaps?  Lots of people stopped. Some had been in Boy Scouts. People without instruments donated money. Henry’s project had struck a chord, so to speak.

A former teacher’s contribution to St. Helena together with the money donated to Henry’s project went to buy other instruments that were missing, to pay for repairs and for music stands with a cart to haul the stands. Since Ms. Lussier is also skilled in instrument repair, the school will probably at some point buy tools for her to use.

Principal Hileman said that in 2015, the Christmas concert was mostly choral music with a couple of simple band pieces, partly because it was Christmas and partly because the band program had just started. Months later at the spring concert, the band had improved enormously and comprised most of the program. This fall, every child who started band last year came back. Not a single child dropped out.

Ms. Lussier, a graduate of St. Olaf, brings a delightful sense of humor to her groups (I saw her music class with her fifth-graders), as well as the authority of her personality and excellent musical skills (she sings, plays guitar, piano and her specialty instrument the trombone). And, of course, as a certified K-12 music teacher, she has basic proficiency in all the other instruments.

The children are receiving a huge oportunity. As Hileman says, “The achievement gap is an opportunity gap.” St. Helena wants to create opportunities.

Hileman herself learned to play piano as a child and still plays, mostly for her granddaughter. She says, “A child who learns an instrument has it forever.”

St. Helena’s Christmas concert is in the basement of St. Helena Church, Rowan Hall, on Dec. 21 at 7 p.m.