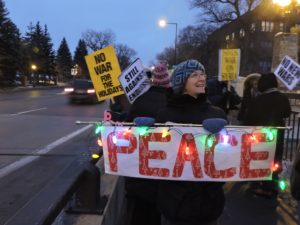 Are you feeling helpless and hopeless because of the madness in Washington? Take some time this holiday season to speak out for peace:  No War for the Holidays is the theme for the peace vigil on Dec. 20.

Several Twin Cities area peace and anti-war groups have issued a call urging people to speak out against the danger of a new U.S. war in Korea and against seemingly endless U.S. wars and military interventions around the world.

The groups are urging people to join a peace vigil on the Lake Street/Marshall Avenue Bridge over the Mississippi River on Wednesday, Dec. 20, from 4:30 to 5:30 p.m.

A statement issued by organizers says in part, “We gather to send an anti-war message for the holidays, our government is very much at war today. We gather, during this time of celebrations, to say no to U.S. wars and war threats.  The Trump Administration is threatening a war on North Korea, which could lead to another world war. The U.S. also continues its endless wars and interventions around the world and threatens new military intervention on an almost weekly, sometimes daily, basis.”

Marie Braun, a member of Women Against Military Madness, said, “As the U.S. military budget is increased to fund these endless wars, important social services and programs like Medicare and Medicaid are being threatened. Our tax dollars should be spent on health care, housing, education and other social programs, not on war.”