Good-bye Karen Clark and Susan Allen . . . and thanks 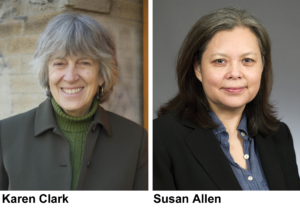 South Minneapolis was shocked to learn last month that Karen Clark and Susan Allen have both decided not to seek re-election in 2018.

The Farmer-Labor Association decided to challenge the incumbent South Minneapolis State Senator Steve Keefe in 1979. The FLA was started in 1975 as a progressive caucus in the DFL. The original Farmer-Labor Party merged with the Democratic Party in 1944 as part of the war effort against Nazis. 1970’s radicals, active in the DFL, rallied around the 1934 Farmer-Labor Platform that said: “Capitalism has failed. We mean to establish a Cooperative Commonwealth” and formed a statewide radical caucus. We supported farmers in western Minnesota that were having a power line run through their farms. We ran Alice Tripp for governor from that struggle. She nominated Fred Harris for president at the 1976 Democratic National Convention.

Then, Keefe decided he would not run again, and Clark became the leading candidate to replace him.

This set up a bruising marathon DFL endorsing convention. Clark was ahead but couldn’t get the 60% necessary for endorsement. Berglin offered Clark her seat in the Legislature if Clark would support Berglin for the seat in the Senate. It would have been very difficult and expensive to beat Berglin in a primary election in the Senate district, so Clark agreed to run in Linda’s open legislative seat, and she’s been sitting in that seat for 37 years. And she has gotten up from that seat many times to sponsor legislation on hate crime enforcement; unemployment compensation for sexual harassment; funding for a Native American Battered Women’s Shelter and an Asian Women’s Shelter, etc.

“If you are elected state representative would you author and support legislation: 1) Decriminalizing the recreational use of marijuana? 2) Establishing free tuition at all Minnesota Community Colleges and Technical Schools? 3) Establishing free medical care for all citizens of Minnesota?”

If you are a candidate for the Legislature in 62A or 62B seeking DFL endorsement, please contact Southside Pride: edfelien@southsidepride.com and we will include you in the February edition. Fifty words per question.

Susan Allen was first elected representative for District 62B in 2012.

This year she authored legislation to fund the Harriet Tubman Center West, to fund mental health treatment for communities of color, and to fund child protection education for American Indian families.

We asked the four candidates who we knew were running for DFL endorsement in 62B the same three questions:
Benedict Schweigert said, “I support decriminalizing marijuana. We have seen legalization efforts succeed in many states and there is no reason that Minnesota cannot join the growing consensus around marijuana legalization.

“Our excellent community colleges and technical schools already do so much to better the lives of students and their families. These programs should be better funded and they should be affordable to all Minnesotans, regardless of income. That should include a guarantee of tuition-free education for those who cannot pay.

“I will explore a state-based single payer model and pursue it if possible. And I will work with policy makers to address the growing prices of prescription medication and to push down healthcare costs so that Minnesota can reach full healthcare coverage for our citizens.”

Korina Barry wrote: “I am in support of decriminalizing the recreational use of marijuana, and will advocate for communities of color disproportionately impacted by marijuana laws.

“I will advocate for free tuition and equitable access to community colleges and technical schools.

“I am in support of free medical care for all Minnesota residents.”

Aisha Gomez wrote: “Yes, I support decriminalizing the recreational use of marijuana. My father spent time in jail when I was young on a marijuana charge so I know firsthand the impact that the criminalization of cannabis has on families. Too many, especially Indigenous, black, brown, and poor young men, have become fodder for the system of mass incarceration because of misguided marijuana laws.

“Yes, for establishing free tuition at all Minnesota community colleges and technical schools. College is out of reach to many in our community. Offering free tuition, and focusing on technical education that is responsive to economic trends, is one way to even the playing field for working people and to provide access to jobs with family-sustaining wages.

“Yes, for establishing free medical care for all citizens of Minnesota. I believe that we must decide as a society that health care is a human right and a public good, not a way for corporations and their executives and shareholders to get rich. We spend more money for worse care than anywhere in the world. Single payer health care is a moral and economic imperative.”

Rebecca Gagnon did not respond to our survey.