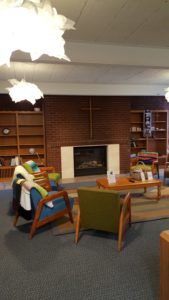 Minnehaha Communion Lutheran Church (MCLC) has already been for years a place where non-members and strangers come to be  buried and married (same-sex couples included). And for many years there have been regular AA, Al-Anon and Adoption Support groups that meet at the church. Community groups sometimes use the building as a meeting place and the church participates in Open Streets every year. More recently, the little library in front of the church has a “request for prayers” box where people leave notes on a regular basis.

The new Healing Hub, which will open with a blessing and dedication on Sunday,  Jan. 28, is something new and a different way for the church to extend itself to the community.

According to its website, the MCLC congregation is in the process of learning to support healing. It hopes to be a resource to the community for “those who have gone or are going through traumatic times.” In an intentional way the church wants to be “a place where people can experience God’s hope, healing and wholeness.” As Vicky Anderson, president of the church council at MCLC, says, “The church is working to put its arms around those who are suffering. And it’s everyone.”

Over the past several years, the congregation has been learning that many people have “wounded hearts” and there are many reasons for trauma. A person may be recovering from a serious illness or accident, they may suffer from anxiety and depression, they may have spent time in prison, they may have had adverse childhood experiences. Gay or transgender folks and people of color most likely have been victimized by prejudice and possibly by hate crimes. A person may have returned from war bearing many scars.

This awareness makes the congregation more open to building relationships and perhaps more gentle and welcoming to newcomers to worship. And that is part of the ministry. The other part is the special room, the Healing Hub, which will soon be available to anyone in the community who needs a place maybe for a difficult conversation that needs a calm environment; or to sit with someone the day before surgery; or for a reunion with an estranged family member; or to talk with a friend who has been injured in some way; or for a mediation; or for a smallish group that wants to watch and discuss a film … There is also a smaller private room available for more confidential conversations. It’s free (donations of course accepted);  people are trusted to treat the space with care; and it will be reserved on a first-come first-served basis by signing up online or calling the church.

The soft bluish-green walls and the gleaming woodwork in the Healing Hub are relaxing. The dark blue carpet, gas fireplace and refurbished retro chairs draped with blankets and afghans are embracing. Weighted blankets, fidgets and neck snakes can be used for a calming effect. Fanciful cloud-like light covers on the ceiling add a touch of whimsy. Photos on the walls reflect the neighborhood and its diversity. Practical features are the large video screen, microwave and coffeepot. Stress-reducing items such as a rocking board, a platform swing, a body sock (for children), exercise balls, noise-canceling headphones, relaxing nature sounds and aroma therapy diffusers are all available to be checked out from the sensory library.

It’s important to note that in order to use the space, people don’t have to be Christian nor will they be expected to become Christian or attend church, according to Pastor Sally Ankerfelt. The Healing Hub is not an attempt to prosyletize. As Anderson put it, “We discovered that building relationships is what is important versus trying to influence others.” She stated that the church wants to offer a “healing space and tools that will help a person heal emotionally and spiritually, develop resiliency, and move forward.”

Anderson quotes Martin Luther King Jr.: “Life’s most persistent and urgent question is ‘what are you doing for others?’ ” The answer at MCLC is the Healing Hub.

Throughout the years, the congregation had been asking how they could reach out to the neighborhood. When the pastors were called, in the religious sense, to help create a trauma-informed church, a congregation that would be open and welcoming and supportive especially to those who had suffered trauma of many kinds, it became a call to the church council as well. Pastors Dan and Sally Ankerfelt, a married couple on one pastoral salary, and their then-15- and 18-year-old children went on sabbatical in 2014 to the Philippines where they volunteered in an orphanage. Upon their return they did intensive study on trauma.

The call set the congregation in motion to expand their hearts and minds as they became educated about anxiety, depression, ACE (Adverse Childhood Experiences), living with disabilities, racism, surviving prison and war. It set some members of the congregation in motion to get to know each other on a more profound level and to share their heart wounds with one another, but, as Vicky Anderson says, “One’s suffering, one’s vulnerability are the hardest points to connect on.”

About 30% of the active members participated at one time or another in many seminars and study groups such as the Lutheran webinars on Safe and Healthy Congregations; a two-day STAR (Strategies for Trauma Awareness and Resilience) workshop; the Institute for Healing of Memories; and seminars on racial justice and inclusion.

The years since 2014 at Minnehaha Communion Lutheran Church have been years of great growth. And I don’t mean growth in the sense of numbers, although for 2018, MCLC has healthy numbers: 350 members on the books and attendance of 70 to 90 on a Sunday morning with a surprising 60 to 70 on Sundays during the summer. No. I mean growth as in a mind- and heart-expanding journey of awareness toward “hope, healing and wholeness.” What they are doing is brave, risky, a new horizons venture, a vision without an exact model.