The sinking of South Minneapolis 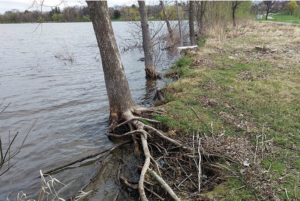 Tomorrow night, Feb. 13, from 7 to 9 p.m., at Pearl Park Recreation Center, the Park Board will be hosting a meeting to discuss its Lake Nokomis Shoreline Enhancements Project. According to the Park Board, “This project is focused on stabilizing erosion along portions of the shoreline, improving water quality, removing invasive plant species, and improving habitat for upland and aquatic animal species.”

They say the principal problems with Lake Nokomis are shoreline erosion and water quality.

This exercise seems a lot like rearranging deckchairs on the Titanic. The captain has asked all the passengers for their participation in deciding how the deckchairs should be arranged as he continues to steer the ship into the iceberg.

Instead of feel-good exercises that create the illusion of participatory democracy, why doesn’t the Park Board try to solve the problem?

But, if we lowered the water level of Lake Nokomis by removing the dam, then Lake Nokomis would become a mud hole, unsuitable for swimming. In a letter to Deanna Boss that we published last month, Park Board

Commissioner Musich said the dam “has resulted in lower bacteria counts at Nokomis’ beaches, keeping them open throughout the summer, unlike Hiawatha’s beach, which is frequently closed because of high bacteria counts.”

Theodore Wirth understood that problem 90 years ago when he dredged Lake Nokomis and Lake Hiawatha and created swimming beaches. Since then the City of Minneapolis has dumped tons of sand on the streets to help drivers control their cars in winter. This sand has washed down the storm sewers and into Minnehaha Creek and then into Lake Nokomis. The city should help the Park Board remove this sand.

Take down the dam and dredge the lake.

That would be the most effective shoreline enhancement.

Anything else is simply putting lipstick on a pig.