A brief history of the heart 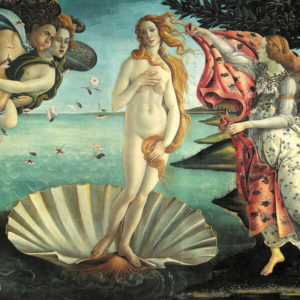 Valentine’s Day will soon be upon us. This day can be a boon to restaurants offering date night specials, confectioners and bakers due to the association with sweet things, florists, obviously, and greeting card makers and sellers. The last category will find new ways to depict that ancient symbol: the heart. To the inquiring mind, two questions suggest themselves. Why is there an association between the romantic-sexual aspects of the holiday and the human heart (and not, say, some other organ) and why does the symbol for the heart not really look much like an actual heart and yet feel so evocative of various emotions? This led us to investigate a long history of evolving notions about the physical body, with an emphasis on the heart. To be human is to be self-aware. We like to think, more self-aware than other animals, but then again, how do we know? To be self-aware has a physical dimension, and we have had thousands of years to try to learn all the secret knowledge of the body, yet even today we know surprisingly little. If, in reading the history below, you feel a little surge of superiority over ancient people and their beliefs about the physical body, suppress it and have a little humility, because if the human race survives long enough, our own cherished beliefs about that subject will seem equally bizarre and embarrassing (and downright harmful) to our descendants.

The story of the heart symbol is shorter, if only because there is no definitive answer to it. According to the History Channel website, “some believe the … pictogram derived from the shape of ivy leaves, associated with fidelity, … while others contend it was modeled after breasts, buttocks or other parts of the human anatomy. Perhaps the most unusual theory concerns silphium, a species of giant fennel that once grew on the North African coastline …” Silphium is now extinct, which makes it hard to research, but its seed pod was shaped very much like the present-day “heart.” Why was it associated with romantic love? Because among its other supposed medicinal qualities, it was considered an effective contraceptive. The History Channel continues: “Since the human heart has long been associated with emotion and pleasure, the shape was eventually co-opted as a symbol of romance and medieval courtly love. It grew especially popular during the Renaissance, when it was used in religious art depicting the Sacred Heart of Christ and as one of the four suits in playing cards.” Hold that last thought.

The History Channel does admit, and other sources focus on, the more obvious possibility that it was simply modeled on the actual heart, of which anatomy was not fully known until relatively recently. For instance, physicist Guido da Vivegano (1280 – 1349)—the scientific disciplines were not very compartmentalized back then, but today physicists claim him—dissected human corpses and published drawings. He thought the lungs were three-lobed. In one of his drawings, the heart looks like a slightly narrower heart-symbol, but then again, not terribly different from an actual heart, given that this was in a probably rather old and dessicated corpse. Which leads us to beliefs about the body and its major organs through the centuries.

Ancient medicine includes beliefs and practices, inasmuch as they are known, of most of the ancient cultures, including the Egyptians, Chinese, Persians, Greeks, Indians and Romans. There was some cross-pollination; for instance, the Indians have two ancient systems of medicine—Ayurveda (the older system) and Unani (the younger). Unani was heavily influenced by Ayurveda but also by the science of the Persians and even the Greeks. The Egyptians are one of the oldest civilizations we know much about, mainly because they had an advanced system of writing that modern scholars have been able to translate for over two centuries. Of mummified dead bodies of those they thought worth preserving, that is, noblemen, their mothers, cats. But did you know that the heart was so valued that it was removed from the body and mummified separately? The Egyptians believed that the heart, rather than the brain, was the source of human wisdom, as well as emotions, memory, the soul and the personality. However, despite the ancient Egyptians’ seemingly advanced medical knowledge, the heart’s role in blood circulation was not understood at all. They believed the heart’s “channels” linked all parts of the body together, delivering not only blood, but also air, tears, saliva, mucus, sperm, digested food and waste. On the other hand, they thought the only real function of the brain was to pass mucus to the nose, so it was one of the organs discarded during mummification. This idea would be further developed by the Greeks in their theory of humors.

Western and some parts of Eastern medical knowledge from antiquity through the early modern period was dominated by the theory of the four humors, or humorism. This in turn was linked with the better known (today) theory of the four elements, which in turn resulted from the four possible combinations of two binary qualities, wet-dry and hot-cold. One thing the four elements paradigm was obviously influenced by is the observation of four seasons. This can be un-scientifically verified by the fact that in two major ancient cultures where the seasons are perceived differently—Hindu and Taoist—the corresponding ancient philosophies speak of three doshas in India, corresponding to three seasons, and five phases in China, corresponding to five seasons. India is considered to have three seasons: spring, summer, and monsoon. China has an extra season between summer and fall. The four humors, with their original associated elements, temperaments and bodily organs were: blood / air / sanguine / liver (later heart); yellow bile / fire / choleric / spleen; black bile / earth / melancholic / gall bladder; and phlegm / water / phlegmatic / brain (later lungs). These philosophical theories of elements and humors, we shall see, became vital to medical knowledge, but also underpinned other human activities such as art and drama, the forerunners of psychology, physics, and chemistry, astrology, pagan theologies, and even theories of history, as well as games and other lighter endeavors—remember I mentioned playing cards? Yes, both Tarot cards and playing cards have four suits, which correspond to the four humors, along with their trailing links to elements, seasons, temperaments, bodily strengths and weaknesses, ages of human life, astrological signs, gods and goddesses, planets, flowers, herbs, symbols, and colors.

The big minds of this philosophy in the field of anatomy were, from oldest to most recent, Hippocrates, Galen and Avicenna (Romanization of Ibn Sina or Ali Abu Sina) with Aristotle and Plato being major forerunners. Hippocrates (460 – 370 BCE, in Periclean Athens) is well-known as the Father of Medicine. The four humors were not that important to him since his method of medical practice was famously passive and what we would now call holistic. The heart was not considered a major organ at this time because it was not known how vital blood is to life nor that the heart had that much relationship to blood. In fact, the heart was thought to have more to do with breath, because it was thought that the pulse measured breathing. Veins and arteries had been distinguished from one another, but another early Greek, Praxagoras (born 340 BCE?), “discovered” that veins carried blood, while arteries carried air or perhaps an airy soul-stuff called pneuma. Galen (129 – 216 CE, Greek born in present day Turkey under the Roman Empire) was a towering figure in the history of medicine, and perhaps of most importance in the association of the heart with love and sex and pleasure. He brought the doctrine of the four humors to the idea of four temperaments—the sanguine, choleric, melancholic, and phlegmatic. He found out that both veins and arteries carry blood, and that there is a difference in the blood in the two vessels, but since neither blood circulation nor oxygen was known at the time, they still had the wrong idea, believing food was converted to blood in the liver, carried to the heart via veins, thence distributed to the tissues of the body via arteries. At some point, it was the medical consensus that the function of the lungs was to cool the heart, which was considered as more of a furnace than a pump. But this was an improvement over Aristotle’s view that the heart (which again back then had nothing to do with blood) was the fiery seat of intellect, spirit and emotion and was cooled by the brain. Galen brought back Aristotle’s notion of the heart as ruler of mind and spirit and emotion, but integrated that into his humoral theory of temperaments. It was the sanguine/blood humor that made people cheerfully energetic and thus disposed toward love, but still the ruling organ for blood was the liver. Avicenna (980 – 1037 CE), from Persia (Iran), was a polymath metaphysicist and Islamic theologian as well as a great physician. One of his many contributions was to finally identify the brain as the source of thought, sensations, and personality rather than the heart. Breath was still considered somehow linked to the soul (still is, really), but now the lungs rather than the brain began to be associated with the elemental air. This gave rise to the mind-body dichotomy which plagues medicine to this day and was a major focus of Avicenna’s thought.

By the time of Shakespeare, who used the concepts of the four humors and their temperaments a lot in his plays, the heart had finally supplanted the liver as the organ associated with blood and sanguine lustfulness. This was just a few decades before the English physician William Harvey (1578 – 1657 CE) would discover, finally, that the heart is a blood pump. But thanks to the doctrine of courtly love, another mainstay of medieval Europe, and Galen and Shakespeare, and all the other crew, we now associate the silly heart shape, and sweet things, and of course, romantic passions, with a certain saint’s day in the middle of February.