February holidays and the return of Persephone 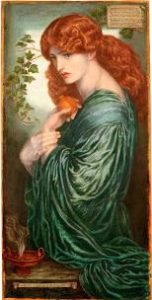 This year Valentine’s Day fell on the same day as Ash Wednesday. They always happen around the same time, right after Groundhog’s Day on Feb. 2. What a strange collection of holidays. What could they possibly have in common? Perhaps they’re all a riff on the ancient Greek holiday celebrating the return of Persephone.

Persephone was the only daughter of Demeter, the goddess of agriculture. Hades, the god of death and the underworld, fell in love with her and captured her and brought her to reign as his queen in his underground world. Demeter was so depressed she refused to help crops grow, and famine ruled the earth. All the other gods got together and complained to Zeus. Zeus told Hades he had to give back Persephone. Hades said Persephone wanted to remain with him. “If she eats on her way up from Hades then she must stay with me,” Hades said. The gods agreed. On her way up from Hades, Persephone stopped, looked back and tasted one pomegranate seed. Hades claimed victory. The other gods protested, “It was only one pomegranate seed.” Zeus said there had to be a compromise. Persephone may spend six months with Hades, but she must come back and spend six months with her mother, Demeter, and help with the harvest.

And the return of Persephone became many things. The beautiful young maiden became a groundhog who sees his shadow and predicts six more weeks of winter—a necessary adjustment of the first day of planting for Northern Europe and North America.

The tasting of the pomegranate becomes a remembrance of love on St. Valentine’s Day.

And the ashes on the forehead on Ash Wednesday, beginning forty days of Lent (very close to the forty-five days between winter and spring that marked the ancient rite), remind us that we all came from dust and to dust we shall return.

This year, the actual date of Persephone’s return would have been February 4.

For those of us who live in the north there is still a wait for spring. But the holidays of February remind us that spring is inevitable. Life will once again spring out of the moist and bountiful earth.