My life with Annie Young 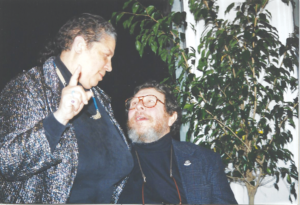 Annie Young lived life to the fullest for 75 years. I feel lucky and blessed to have known her for the last 45 of those curious, remarkable and productive years—and, to call her my best friend for much of that time. Friends tend to come and go, but Annie’s friendship stuck. Of all the things that Annie was, she was above all, a loyal and steadfast friend, not just to me, but to many.

Few would have guessed that this wild and crazy ski bum, that I met in Sioux Falls in 1973, would morph into, arguably, the most significant and influential environmental advocate and activist for Minneapolis in the last 75 years.

Knowledge of her pre-1973 years is sketchy. We know that she went to school in LA and Denver, Colo. Although I have seen photos of Annie, the high school cheerleader, I find myself bemused while trying to picture just how dramatic and dynamic that Annie on the cheerleading floor must have been.

On the ski slopes of Vermont, this carefree and wild “Aspen Annie” became the first female ski-lift operator.

In 1973 life changed dramatically for Annie. Pregnant, at loose ends, hitchhiking cross-country from Vermont to parts unknown, by chance and good fortune, Annie befriended a group of hippies who were organizing a natural foods co-op in Sioux Falls, S.D. These kind people took her in, demanded that she get off the road, stay in Sioux Falls to have the baby while surrounded by her newfound friends. She stayed, had the baby and then became active in the new Sioux Falls co-op. And thus began her lifelong involvement in the natural foods co-op movement. It was there, on one of my frequent trips to visit and give help to new and struggling food co-ops that I met Annie and her weeks-old baby, Shawn.

Annie visited the Twin Cities often as the Sioux Falls representative to regional meetings of food co-ops. Here she befriended many co-op activists from around the Upper Midwest and eventually relocated to Winona, Minn., and became active in the food co-op there. In Winona she was an early member of an organic co-op farm called Wiscoy Valley Farm.

Still active in the food co-op movement, Annie eventually ended up in the East Phillips neighborhood of Minneapolis. The City of Minneapolis was planning to build a garbage transfer station on some vacant land in this already heavily polluted neighborhood full of many of the city’s poorest people of color. This was environmental racism at its worst, according to now Park Board Commissioner Annie Young.

The neighborhood stood up as one in a campaign to stop the garbage transfer station, a facility that would bring more heavy truck traffic and pollution to the Phillips neighborhood. BUT, Annie, a single mother, would not be satisfied to just stop the garbage transfer station. No, she wanted instead to do something positive with this piece of land. Slowly, a vision of an incubator for new environmental businesses grew in her mind. So one night, after playing pinochle, we took my sons’ Legos and built the first crude model of the dream that became The Green Institute. She used that Lego model to spread her vision and amass funding for her dream project. It would be a few years before the Green Institute building would be erected as the most environmentally sound building in Minnesota. That was Annie, taking something negative and not just stopping it, but transforming it into something visionary and positive.

In 1989 Annie was elected, as a Green Party candidate, to her first of seven terms on the Minneapolis Park and Recreation Board. From the first she became a strong voice (pun intended) to get the park system to become more eco-friendly—focusing first on the over-use of chemical herbicides and pesticides in the parks.

Four years later I was privileged to join Annie on the Park Board for eight years. During that time we were able to establish dog parks, build many bio-filter ponds for the lakes, reduce lawn mowing acreage, and re-establish more native plant species and wild areas in the system.

Annie was one of three citywide commissioners on the nine-member Park Board. As such she has left her green fingerprints all over town. Although she always had a citywide outlook, she remained a steadfast activist in our poverty burdened local East Phillips neighborhood. Despite the large number of children in the neighborhood there was no recreation center—except for a dilapidated building in the park that American Indian Movement was using, with precious little funding, to provide some programming for kids from Little Earth housing project.

While I was still on the Park Board, Annie and I began advocating for a Park Recreation Center for East Phillips Park. No money. No money. No Money. There was money for all sorts of other things, but no money for a rec center in one of the most impoverished neighborhoods full of people of color. I left the Park Board after eight years, but Annie would not quit. She stayed glued to this issue. The issue was dead, but not to Annie. Finally after 15-20 years of advocating, and with some help from legislators Karen Clark and especially Linda Berglin, a rec center was approved and funded and built for the kids of Little Earth and Phillips.

Annie has a well-known public side. I knew more of her. We celebrated the Winter Solstice together every year for 30 years with family and very close friends. Annie always had a reading of hope and joy to share with us at our annual Winter Solstice Supper. Annie always had a garden; even in later years of poor health and limited mobility she had a few plants in pots. Annie was like a grandmother to my sons. She loved to play pinochle and cards in general. She knitted. She loved to party hardy. She had gifts, flowers and cards in abundance for friends and special occasions. She raised an exceedingly industrious and thoughtful son. She often seemed pushy, brash, harsh and loud, but she carried in her a generous heart full of love. I am so thankful for her contributions to our neighborhoods and city.

Young served seven consecutive terms representing the entire city as an at-large commissioner, from January 1990 until December 2017, making her one of the two longest-serving commissioners in the MPRB’s 134-year history.
Young was a lifelong environmentalist who spearheaded solar energy use in parks, clean water initiatives and a 95% reduction in chemical pesticide application on Minneapolis park land. She was also a powerful Mississippi River advocate, instrumental in the creation, development and stewardship of riverfront park land, which includes Riverside Park.

Riverside Park was one of the first parks established in Minneapolis. It is located at 2820 S. Eighth St. and encompasses 28 acres of riverfront land on the west bank of the Mississippi River in the Cedar Riverside neighborhood. In 2005, MPRB Commissioner John Erwin nominated that an area within Riverside Park called Lower Riverside Park be renamed after Young. According to current Board President Brad Bourn, there has been strong support among past and current board members for renaming the park in honor of Young and discussions were underway to do so after she retired from the board.