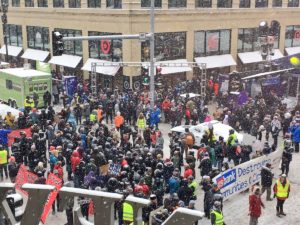 Welcome to the new Southside Pride column Resistance Persistence. We will offer a summary of the past month’s progressive resistance activities across the Twin Cities and note upcoming actions in near future months. We welcome feedback, including corrections or suggestions.

The Twin Cities political scene is fast-moving and ever-changing and we might get something wrong, or not know of something that ought to be here. This issue includes two previous months, and they are two of the busiest months of the year, especially this year as we marked Donald Trump’s first year in office and hosted a damned Super Bowl along with all the other new year/new directions stuff that goes on, such as kicking off a high-stakes midterm elections cycle.

Our Revolution in MN / Our Revolution TC
This organization appears to be still growing, although not as explosively, and yet still experiencing growing pains. In 2017, it incorporated as an independent 501(c)4 while solidifying its ties to the parent organization; elected a board of directors; and spawned several local affiliates, including one in Saint Paul. Another group (with some overlap) is called Our Revolution TC, but this is misleading, as they focus only on Minneapolis.

OR MN held a major membership meeting in Alexandria, Minn., and is making a major effort to be an organization of statewide relevance. On Jan. 6, OR MN held a very ambitious online RCV (ranked choice voting) poll for statewide pre-caucus candidate endorsements. It was perhaps too ambitious. They ended up walking back endorsements for State House and two for Congress, because many members, mostly outside the Twin Cities, objected to all members having a vote in all districts.

When all the dust settled, the following slate had been endorsed (CD = Congressional District): Tina Liebling, Erin Murphy, and Rebecca Otto for governor, Ryan Winkler for attorney general, Jon Tollefson for state auditor, Rich Wright for CD 1, Dean Phillips for CD 3, and Ian Todd for CD 6. OR MN made no endorsement in CDs 2 and 8 in order for local chapters in those congressional districts to consider local issues.

There has been further post-caucus regret on some of the endorsees, and also some internal strife within OR MN, unfortunately played out partially in public on Facebook, including the resignation of the president of the board.

Highly critical of the technocratic online approach of OR MN, they focused on one big membership meeting and in-person pitches before voting at the meeting on Jan. 21, followed by a caucus training session on Jan. 30. (OR TC is credited with doing great caucus trainings.) Their slate of endorsees: Angela Conley for Hennepin County Commission District 4, Anthony Hernandez, House 60A, Jamie Long and Meggie Wittorf, House 61B, Hodan Hassan for House 62A, Aisha Gomez for House 62B, Jim Davnie for House 63A, Erin Murphy for governor, and Keith Ellison for Congress in District 5.

Late breaking Our Revolution news: A new group is forming called Our Revolution POC. Too early to say what they will get up to, but it sounds promising. Expect both local OR MN and OR TC members to be very active at DFL conventions this year.

Twin Cities Democratic Socialists of America
On Jan. 20, 2018, TC DSA (full disclosure—I am the co-chair of this organization) held its largest ever membership meeting at North Commons Park Rec Center, with standing room only and over 140 members in attendance. At this meeting, we signed up what was at least our 500th member, and TC DSA, along with the national DSA, is still growing. There was not a lot of pressing business to do, so the meeting focused on celebrating where we had come from over 2017 and broad stroke directions for 2018, including “pitches” from all the “branches” in the chapter.

DSA’s radical democracy structure is to have members self-organize into branches—semi-autonomous groups based on interest areas or geography. It takes a while to get bedded down, but in TC DSA it is really yielding fruit. We also have a few working groups and two hardworking committees: Operations, which does communications, fundraising and event planning, and Political Education, which plans socials and training sessions, among other tasks.

At the January meeting, we had a 2017 in Review session that highlighted a staggering 50+ events, actions, social gatherings and membership meetings that TC DSA had in the course of 54 weeks. The highlights of the list included:
• protesting against Trump’s immigration policies in several mass actions
• endorsing Ginger Jentzen for Minneapolis
• sending 15 delegates, alternates and observers to the DSA Conference in Chicago in August
• attending the Bde Maka Ska vigil for victims of alt-right terror in Charlottesville, Va.
• about 20 of us spending Labor Day picketing fast food establishments and flashmobbing a Home Depot along with CTUL and allied organizations
• doing free brake-light replacements in CTUL’s parking lot
• hosting a public talk on universal health care and “health justice” by “rockstar” young DSA pundit Tim Faust (attended by over 130 people)
• our second annual meeting attended by 105 members
• a major event at the U of M called the Campus Labor Institute, bringing labor and student activists together
• a fabulous social event Bowl-cialism at Memory Lanes Bowling to end the year with a beer and a hug

Since January, TC DSA continues to be quite busy. A large number of us participated in the mass demonstrations against US Bank and for the Water Protectors. This was preceded by a “Know Your Rights” teach-in by two lawyer-members and by joining with other groups for signmaking and marshall training.

Our Socialist Feminists Branch put on a great social-fundraising event at Moon Palace Books—complete with DJs and cocktails—called The People’s Prom.

A new Electoral Branch has formed out of last year’s Election Guide Working Group, and their attention is laser-focused on the midterms and what TC DSA can do. We tracked caucus participation of our members (all DFL as it turns out, although we have a significant minority of Green Party members) and found that at least 24 members have been elected as delegates to SD, city or county conventions.

We will have information tables at some DFL conventions. Another new branch, on Housing Justice, is working on campaigns for rent control and other tenant rights areas. And finally, the Universal Health Care Working Group is gearing up to do canvassing to educate voters about “Medicare for All.”

ISAIAH
ISAIAH is a multi-faith mobilizing organization where participation can be either by church or other faith group or by individuals. They held a press conference on Jan. 18 to launch the #claimingourvoices public agenda for 2018. They also concentrate heavily on “flooding” the caucuses, encouraging their members to run for party offices and delegate slots, and providing “faith agenda” informational packets and swag and organizing tips. They have been active for a couple of election cycles already, so they also put time in on “accountability” of electeds, and lobbying the Capitol.

Their main focuses for this year are on racial justice and climate justice.

FFI Both OR TC and TC DSA have newsletters to keep you informed. You can sign up for TC DSA’s biweekly Little Red Letter directly on their Facebook page: Twin Cities Democratic Socialists of America. For ISAIAH news by email, start with their Facebook page and go to their website, where there is a sign-up page.

PHOTO CAPTION: A coalition including MN350, local groups, and water protectors from all over North America, protests on Nicollet Mall against US Bank’s investment in DAPL and other pipeline and extraction projects. The protest took place Feb. 3, the day before the Super Bowl was played at US Bank Stadium.