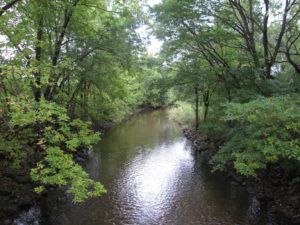 Managing the watershed mainly involves us white people learning to be less destructive of this environment our ancestors flat out stole from the ancestors of our Dakota neighbors, friends, and in some cases, relatives. We can learn how to be less destructive by following the surprisingly modest “suggestions” from the MCWD (condensed). Only where our city has chosen to transform these into ordinances do you run the slightest risk of penalties if you don’t do these things, but if you are human and not an invading space alien actively trying to destroy the planet, you should do them.

1. Mow often, letting grass clippings stay on the lawn as a natural fertilizer. Keep fallen leaves out of gutters or ditches.

2. Plant an extra tree, wildflowers and grasses, or other natural landscape. Dig up no more ground than necessary for any project.

3. Point downspouts to flower beds or lawns where water can soak into the ground, or use a rain barrel.

4. Use lawn and garden chemicals carefully and sparingly if at all. Reduce the use of hazardous products to those you can’t do without. Dispose of properly. Use salt sparingly in winter.

6. Use car wash facilities because their wastewater goes into the sewer for treatment.

7. Clean up pet wastes immediately to keep it out of lakes and streams.

There are many ways to enjoy the creek and other resources managed by the MCWD. One is to paddle downstream from the source of Minnehaha Creek in a kayak or canoe—European explorers did just the opposite, they paddled upstream from the falls to find the source. You can access more information about this modern-day route and see how to tell when conditions are best at this link: http://www.minnehahacreek.org/explore/canoe-minnehaha-creek.

Along this route are many spots with a story to tell, stories about history or language. Less than a half mile east of the intersection of East 34th and Minnehaha Parkway is the most well-known spot of all along the creek—Minnehaha Falls. As late as the 1930s, there was an “Auto Tourist Camp” all around the falls, as this was still not part of the city of Minneapolis. Families would drive from all over the state to park in the lot and erect the family tent somewhere near the falls for a holiday weekend of splashing in the creek, playing impromptu softball games, or outdoor cooking and dining.

In researching this area, and in thinking about the recent re-naming of former Lake Calhoun to its much better name, Bde Maka Ska(Dakota for White Earth Lake, which was what the Dakota who lived in the camp on its shores called it), I got very interested in Dakota as well as Ojibwe names for South Minneapolis and other local landscape features. I discovered (and bought) an excellent book by Dakota scholar, poet and author Gwen Westerman (yes, she was related to Floyd “Red Crow”) and Bruce M. White. The book is “Mni Sota Makoce: The Land of the Dakota” and you can read a lengthy excerpt in Google Books at https://bit.ly/2I2jfYu.

The Dakota’s main creation myth (like all ethnic/spiritual groups, they have several but one which is most central) is that the Dakota people either landed from the Milky Way, which they called Canku Wanagi (literally, Spirit Road), or were created from mud by the Creator. In any case, the section of Dakota who lived in or near present-day Minneapolis believed that their origin was in the area called Bdote Mni Sota, which is quite close to Minnehaha Falls. Bdote (sometimes spelled Mdote, and of which Mendota is a corruption) means “mouth” as in a river mouth or where two watercourses flow together. Mni Sota, obviously the origin of the river and state name, combines mni (water), with sota (reflecting the sky). The Bdote area, besides the actual confluence of the Minnesota and Mississippi Rivers, encompasses Mni Sni (Coldwater Creek) and Oheyawahi (Pilot Knob.) As the authors of Mni Sota Makoce state: “In this place, the Dakota people flourished … Our winter camps became villages, and we became the people of the Oceti Sakowin, the Seven Council Fires.”

The Dakota were not the only native people found here in the 1800s when the massive influx of various Europeans began, mostly on the heels of the Louisiana Purchase. Another major group found here was the Ojibwe, one of three major native tribes (along with the Ottawa and the Potowatomi) who are collectively called Anishinaabeg, or first people. Unlike the Dakota, they did not claim to have originated here as a people. But interestingly coincidental, their story also involves “seven fires,” which in this case refers to seven distinct prophets who came to the people when they used to live on the eastern seaboard and sparked their migration west. According to an article on mnopedia.org, “The first prophet said the Ojibwe should move west from the eastern ocean or they would perish, and that they would know that they had reached the chosen land when they came to a place where food grew on water. The food was mahnomen (wild rice), found in Minnesota’s shallow northern lakes.” This migration is believed, based on Ojibwe oral history, to have occurred around 900 ACE. Prophets two through six predicted the presence of the Dakota on the land they would move to, told them how to get along and how to live there, predicted the coming of light-skinned people, the loss of land, spiritual practice and language, and ultimately of their children, along with a devastation to their health and numbers and terrible suffering. The seventh prophet predicted a renaissance of the language and culture, and a period of healing and return to community, creativity and health, which many believe is beginning now.

The same mnopedia.org article details the many Ojibwe contributions to American life, including beadwork, dream catchers, birch bark canoes, maple syrup, wild rice, moccasins, toboggans, and snowshoes. The name of the Mississippi River comes from its Ojibwe name of Mizi Zibe, one of the few water features not based on a Dakota name. From the Dakota come the words for tipi (and the construction method) and the peace pipe made of pipestone. And so many names. Minnehaha Falls was called simply mni haha (also spelled gaga or xaxa) which means simply curling water or waterfall (so the Falls part of the name is redundant). Minnehaha Creek however was called Wakpa Cistinna. Wakpa, sometimes wakta, means river, and Cistinna means little. The Mississippi was called Wakpa Tanka, which means big river. And so, of course, Minnetonka comes from mni tanka, or big water.

Minnetonka was an especially sacred and important place to the Dakota people. They began to notice that whenever they showed off their best places to the white settlers, they managed to barge in and ruin them, so the Dakota were able to keep the existence of Lake Minnetonka hidden from the white people for decades. It didn’t begin appearing on maps of the area until early in the 20th century.

The 2019 “road construction season” will see 34th Avenue South being completely rebuilt from Minnehaha Parkway to 58th Street. If you remember when the same thing happened to an even longer stretch of Minnehaha, you know what we’re in for. These major road repairs can be hard on local businesses, so please be sure and support them through the process, lest the road work be finished and the business you fondly remember is gone! But it should all be worth it to have brand spanking new road surface, sidewalks, curb cuts, utilities and storm drains. If you live or own a business in the area, you will have received a few mailings updating you and telling you tips to get through it (do any plumbing or drain repairs before it begins, make plans to accommodate your plantings on the boulevard, etc.) There is a public hearing on the project tentatively scheduled June 5, and later in 2018, when the planning is more complete, a public information meeting will be scheduled.