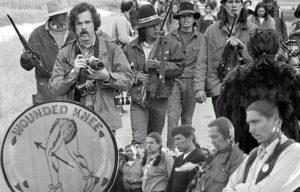 We pulled in fast on the hard packed driveway, stopped in a cloud of dirt and took in the scene. My eyes strained, trying to remember as many details as I could. The small one-story stucco home had trampled gardens around it, three large helicopters surrounding it, rotors still running kicking up an amazing amount of dust in the air. I counted 15 men in flack jackets, most of them with FBI logos on them, three, no four, in suits. All but the suits were carrying automatic rifles, and the suits handguns, either in holsters or in their hands. The three of us jumped out of our car and walked as quickly as we could past the agents to the front door of the house. I really hoped no one shot us. The residents were very glad to see us, obviously frightened. We told them they didn’t have to answer the agents’ questions, sat down, were served strong coffee and talked. After the FBI finished searching and left, we interviewed the family, helped clean up. Unfortunately, this was becoming almost routine.

Two days earlier, on June 26, there had been a gunfight about three miles west. Two FBI agents—Jack Coler and Ronald Williams—and a local, Joseph Stuntz, were killed. It was a terrible tragedy and people were sad and angry all over. I was working for the Wounded Knee Legal Defense Offense Committee WKLD/OC along with two other investigators and had been sent down to the reservation to find out what we could and advise the residents of their legal rights.

What we found was that the FBI had gone berserk. I know that two of their own had been killed and that they were upset, but this was insane. We later found out that they had been told to treat this like a RICO case, like they were dealing with organized crime families and the racketeering and corruption that accompany them. They expected entire communities, entire towns to be criminals and treated them as such, terrorizing everyone from children to very elderly people, shop owners, elected officials, ranchers, farmers, judges, it didn’t matter.

I spent the next 10 months living there. We interviewed many witnesses, and we moved into a bullet-ridden house that had been on the site of the shooting. A young family had been living there with their infant child when the gunfire started. They obviously left in a hurry. The FBI really wanted to find them. Eventually when a Grand Jury was formed, subpoenas were issued for this couple. FBI agents surrounded me one time and demanded to know where they were. Their grandparents were constantly harassed.

Later, as we began to get an understanding of what had happened, it became clear that the problem that day, before and after, was really one of the inadequate training and understanding on the part of the FBI. The agents had no grasp at all of the culture and reality of what they were barging into. This lack of perspective and preparation and occupation and thuggish domineering may work on the streets of New York, but it just got them killed on Pine Ridge. Pine Ridge is where genocide at the hands of white men in government uniforms happened just a few generations ago and it is still very fresh in memory.

Three people were later indicted for the murder of the FBI agents. Dino Butler and Robert Robideau were tried in Cedar Rapids, Iowa. Leonard Peltier was not tried with them because he was arrested in Canada and was involved in extradition processes.

I continued to work with the defense during this trial, helping to prepare witnesses and demonstrating the FBI behavior. We showed the jury the FBI brutality, incompetence and illegality. We called Senator Frank Church who had just finished the Senate hearings on Cointelpro, which documented the FBI’s illegal infiltration and murder and surveillance and worse in the Black, Chicano and Native movements in the U.S., including Pine Ridge. We had testimony about the reign of terror on the reservation. The jury understood and Dino and Bob were acquitted. There was no doubt they fired weapons on that day, but the jury did not believe that they committed first degree murder. It was truly an amazing verdict.

The FBI was furious. They had to pull out all the stops to convict the last remaining indicted suspect, Leonard Peltier. To get him extradited, they terrorized a young woman to get her to perjure herself and make a false statement to the court in Canada. This is totally true, no one doubts it now. Not the Canadian judge nor the U.S. prosecutor. The U.S. prosecutor did not call this woman in Leonard’s trial in the U.S., because he did not believe her story was credible, in spite of the fact that the FBI had provided a sworn statement to the Canadian judge.

The Canadian government was so angry they convened a panel in North Dakota where they demanded that this woman be brought to them. The FBI had her in a hotel room across the street, trying to get her to agree to say what they wanted her to say to the Canadian consulate and judge. She wouldn’t. They showed her a picture of a dead Annie May Aquash, an Indian Woman who was found murdered in South Dakota and told her she or her daughter would end up like that if she didn’t cooperate, but she still refused. Eventually the FBI gave up, walked across the street, swore an oath, and perjured themselves, told the Canadian government that they didn’t know where she was. They had her in custody across the street.

When Mr. Peltier’s trial started, in Fargo, N.D., the government attacked me. They objected to my being part of the defense team. They claimed that I had illegally hid the two witnesses from them. This was a lie. I said that if they had any evidence of this they should charge me, so I could confront my accusers, but the lawyers said it would be a distraction to fight it, so I was not allowed to play the same role in Fargo that I had in Cedar Rapids. The judge in Fargo did not allow the same kind of testimony about the climate on the reservation or the behavior of the FBI that was heard in Cedar Rapids. The FBI was allowed to perjure itself and submit false testimony and false lab evidence, and the defense was not allowed to refute it. Leonard Peltier was convicted of two counts of first degree murder and sentenced to two life sentences, which he is still serving some 42 years later.

So why do I tell this 40-year-old story? Well, it is safer than a current one about ICE cleaning out a Walmart of brown people and it needs to be told. Also, it’s to explain why I am not putting my faith in the FBI or Special Counsel Mueller to save us from President Trump. I just don’t believe he is on my side. I also have a hard time trusting his training and competence. I know that is a prejudice but it is learned from experience and study. We will decrease Trump’s power by organizing, denying him support in Congress, on the street, in the ballot box and wherever he or his supporters show up. Waiting around for the FBI to do it is in my opinion a false hope.

The first Bureau of Investigation was created in the Justice Department in 1908 after Congress specifically denied President Roosevelt his request to create it. They feared the president intended to create an American secret police. This fear was well founded. From that day forward, the FBI, as it later became known, ignored the law as well as the need for court orders to wiretap, surveil, intimidate witnesses, kill or do anything else. For years an FBI agent needed to be a lawyer, but they were not trained in the kind of law that I was. I learned to love the law, to see it as the mechanism by which any person could be equal to anyone else, even the state. That the rules were fair, justice blind, and that truth, facts, intellectual understanding of the law were what mattered. Obviously this was an ideal and no society yet had reached this ideal, but that is what we strove for. The FBI agent’s law was one used to crush, to manipulate. If no one saw you, you did what you wanted. You did an interview, and then made up the facts you needed. You used whatever you had, your muscle, badge, maleness, lies, gun, whiteness to get your job done. Ethics were for losers. There might be ethical FBI agents, I just have never met one.

My father, one of the most ethical, honest men I have ever known, had his own private bungling idiot FBI agent assigned to him during my youth. I can’t tell you how many people have spent time in prison for no other crime than talking to an FBI agent. Or been deported for talking to an ICE agent. Know your rights. You don’t have to talk to them.