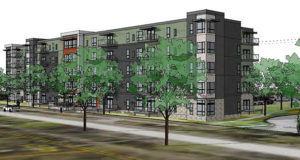 Snelling Yards is a vehicle storage lot for the city at 3601 E. 44th St. between Snelling Avenue and the railroad tracks. In the 1930s the city had storage facilities in every ward especially for snowplowing equipment that would be watched carefully by the two aldermen from each ward. They were called aldermen then, not council members, and there were two representatives for each ward elected every two years, and the two aldermen from the 12th Ward who watched over the Snelling Yard made sure their streets got plowed in the winter.

More recently, it’s been the South Minneapolis site where you can bring hazardous waste twice a year.

The equipment for South Minneapolis is now stored at the Hiawatha Maintenance Facility at 26th Street, so the city made plans to sell the Snelling Yards to a developer for senior and affordable housing.

They issued a Request for Proposals in April of 2016 and they got two responses. After months of community meetings and discussions with city staff and representatives from the Longfellow Community Council, they picked one. That one dropped out, so they went with the second choice, Steve Minn’s proposal. They insisted on some modifications—like putting the parking lot in the back rather than in front of the building—but they approved the plan.

Steve Minn’s “Joint Venture team, comprised of Lupe Development Partners, Ecumen and The Wall Companies, proposed a 100% affordable project consisting of two separate buildings—one containing 100 units of workforce housing and a second containing 103 units of senior housing. Both buildings include a mix of one- and two-bedroom units. Units are affordable at 50% and 60% of the area median income. The Joint Venture proposal also included 138 stalls of underground parking, public green space, several public pedestrian-scale improvements and a proposal to use the rail line at the western edge of the site for a pedestrian greenway.” [From Finance and Commerce newspaper]

Somewhere between the approval of that plan and the next step (approval by the Planning Commission), the plan changed. Instead of a four-story $43-million project, it became a $58-million five-story project. The city doesn’t have a breakdown of the current proposal, but the $43-million project breakdown shows what a genius former City Council Member Steve Minn is in using government money to make himself rich:

$700,000 in capital financing from the Affordable Housing Incentive Fund (AHIF);

$1,800,000 from the Met Council’s Livable Communities Demonstration Account for linking housing with transit;

$600,000 from the Met Council’s Tax Base Revitalization Account that provides $5 million annually to clean up brownfields;

But in the original breakdown, Steve Minn got:

$1,255,966 in a Deferred Development Fee that is taken out of operating cash flow;

$11,172,909 in Syndication Proceeds—tax-exempt housing revenue bonds come with an automatic allocation of tax credits, and these tax credits generate equity for the project by selling them through a broker to some rich person who needs a huge tax break;

The project changed because, according to an article in Finance and Commerce: “The increased unit density was ‘needed to make it work,’ ” said Aaron Diederich, the vice president in charge of construction.

Seemed to me the numbers were working just fine.

The city is currently debating a Comprehensive Plan for housing for 2040. Mayor Frey and Council President Bender want to increase density throughout the city to provide more affordable housing. People in the inner city are concerned that increased density everywhere will mean increased density in their neighborhoods, but not much around Lake of the Isles or in Linden Hills. Lara Norkus-Crampton summed up the concerns of one community meeting: “This plan appeared to enable the concept of affordable housing to be hijacked by developers to justify massive upzonings for a higher rate of return on their investments in new developments. There were a lot of concerns expressed on how this trickles down to the rest of us.”