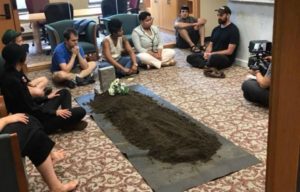 The Poor People’s Campaign (PPC), which began May 14 with an announced 40-day series of actions highlighting all the major causes and intersections of poverty in the U.S., came to a close this month. We attended the last two local, public actions, one in Saint Paul on June 11, and one in Minneapolis on June 18. The previous actions had been over two days, with a “peaceful” public protest followed by a CD action on the next day. These last two actions were on Mondays, and included the CD within the public demonstration. On June 11, in the middle of a nice spring rain, about 100 protesters blocked Kellogg Boulevard while city workers and police looked on from the side. The demo was about $15Now for Saint Paul. The police presence was soft, no riot gear, no helicopters. Mayor Melvin Carter came out into the boulevard and asked to speak. He said that in case we didn’t know, he was completely behind $15Now and was working to make it pass. He said he looked forward to a day when no one would have to demonstrate against the City of Saint Paul. It felt like the old days of genteel, polite arrests for political beliefs.

The Minneapolis action, by contrast, was fairly tense, although not what you could call violent. One could have predicted this from the theme: Beloved Community Means No More Police. A small group of six or so activists entered Mayor Jacob Frey’s office before the action downstairs on the front steps facing the LRT kicked off. Spreading a tarp on the carpet, they emptied bags of black dirt to create a life-sized symbolic grave, representing all the people of color who have been shot and killed by Minneapolis police. Down on the street, the demo proceeded peacefully with lots of lovely songs led by spiritual singer/songwriter Jayanthi Kyle. Local artist and poet Junauda Petrus read her poem “Can We Please Give the Police Departments to the Grandmothers?” Activist and artist Ricardo Levins Morales gave a speech that could be worthy of Dr. King or Malcolm X in its righteous fury combined with intellectual rigor. (I believe Unicorn Riot filmed all this.) I was carrying one of the pre-made signs that said something about us being a disruptive force, printed on both sides. I held it at waist height, except when a train went through the station behind me, I held it over my head so the people on the train and platform could see. So maybe it’s my fault that at 4:45 p.m. they announced that the city, or the cops, had shut down all LRT traffic into and out of the city—presumably to protect the good citizens from us (the bad citizens? I don’t think so). Just after 5 p.m., there was a sit-in in Frey’s office and a small number of arrests.

We attended as court support at the first round of pleas and arraignments for the initial PPC arrestees, in Ramsey County misdemeanor court. This turned out to be fairly boring, because a lot of them wanted to take part in the last two actions, so accepted a plea bargain that lowered the level of their misdemeanor so that they would not have restrictions. We expect the anti-ICE CD (the one that shut down the LRT near the Whipple Federal Building for almost two hours) will have a much more interesting arraignment process. Look for event announcements on the Twin Cities Democratic Socialists of America Facebook page in July if you want to help with court support.

Unless you live in a sealed chamber without internet access, you will have noticed that the president’s “Zero Tolerance” policy on non-citizens (many of them asylum seekers) trying to enter the country resulted in a couple thousand children being violently separated from their parents at the border with Mexico. Most of these children are still themselves incarcerated in “camps,” jails, or hastily requisitioned shelters, while many have gone to other family members or simply “got lost,” possibly in the hands of traffickers. This quite predictably resulted in a flood of outrage over mainstream and social media that even the administration and most (sadly not all) of their staunch supporters could neither brush off nor find legal or biblical justification for. The national Democratic Socialists of America (DSA) led the way in immediate reactions; the two most effective were a flash mob shaming of DHS boss Kirstjen Nielsen at a Washington, D.C., Mexican restaurant, and an occupation and shutdown of an ICE office in Portland, Ore. The president tried to reverse this bad press by issuing an executive order that offered a kinder, more gentle alternative—family-style concentration camps! Thus he provided us in the movement with a perfect litmus test for detecting ill-informed liberals with no analysis of the present horrors; these were the people who “celebrated” this as a “victory” where “Trump was forced to relent.” Major coordinated demonstrations were held across the country on June 30 with the demand “Abolish ICE.” If any liberals ask you does this mean we are advocating open borders, just say yes. DSA, both nationally and locally, experienced another big membership surge following all this.

While all this was going on, on June 23, Thurman Blevins, a young African-American man known as Jun to friends, was shot and killed near his home in North Minneapolis. Reaction was swift, pointed, and so far, peaceful. On the following day three actions occurred. It was also the day of the Pride March (yes, it does seem like everything is happening at once) and there was an action planned to protest police at Pride, so the Blevins killing was folded into this action, and the Pride Parade was held up for over an hour. At mid-day there was a mass protest outside of 4th Precinct police HQ, and starting at 7 p.m., neighbors, friends and supporters gathered near Blevins’ home for a vigil. City Council Member Jeremiah Ellison, who was part of the occupation of 4th Precinct in response to the Jamar Clark killing, is calling for the immediate release of body camera footage (this may have happened by publication time).

Meanwhile, in the world of electoral politics, Congressional District 5 DFL held a special endorsing convention for its congressional seat on Sunday, June 17. For those who don’t keep up with mainstream politics, this was because of the mad last-minute filing scramble on June 6. Keith Ellison, DFL incumbent and at that time endorsed for CD5, decided to run for Minnesota attorney general, for which he first had to withdraw from the CD5 race. Ilhan Omar and numerous other hopefuls, including sitting State Senator Patricia Torres Ray, filed for his seat, leaving the State House District 60A seat, for which incumbent Omar had been endorsed, open. And so it goes. Ellison will face DFL-endorsed Matt Pelikan and a few others in the attorney general race. He plans to keep his position as vice chair of DNC. At the special convention, they kept reminding us it was Father’s Day; this was supposed to make us feel either guilty or self-sacrificing, depending on our father situation. Ilhan Omar gained the endorsement on just two ballots with 68%. Of course there will still be a primary, so if you’re in CD5, you must vote in the primary to have a voice in the outcome.

There was a National Single-payer Healthcare convention in Minneapolis, June 22-24, with a public march on Friday the 22nd. Twin Cities DSA had a large presence at both. Twin Cities DSA is having its bi-monthly membership meeting Monday, July 9, at 6:30 p.m., at the Richfield Community Center, 7000 Nicollet Ave., Richfield. All are welcome. There is a lot we had to leave out of this RP report, including the first Afternoons with Andrea, where CCM Andrea Jenkins hosted a forum on Minneapolis2040, the Comprehensive Plan, at the Seward Cooperative Friendship Store. See the Southside Pride website for a more in-depth report on that.