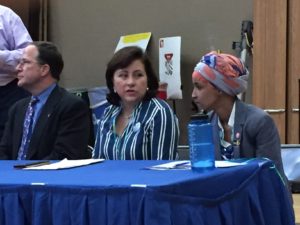 The hardest choice in the August 14 Primary for people in South Minneapolis has to be the choice between State Representative Ilhan Omar and State Senator Patricia Torres Ray for Congress in the 5th Congressional District.

Ilhan has national recognition as the first Somali representative in a State Legislature. She is endorsed by the DFL and Our Revolution. She supports abolishing ICE, is very progressive, and she brought home bacon for her district.

When Ellison was thinking about resigning as 5th District Congressperson a year ago, we supported Patricia for his seat:

“Five and a half years ago we ran a full-page photo of Senator Patricia Torres Ray on the cover of Southside Pride. In 25 years of publishing we have published a full-page photo on our cover only that one time—when a brave Latina first-term legislator stood in front of the Cub Store on Lake Street supporting the cleaning staff on strike. She was the only elected official there.”

“I was at a community meeting at a local restaurant two years ago. All the local politicians were giving short talks about the great things they were doing. Senator Torres Ray went out into the kitchen and brought back the staff of 15 or 20 Latinos. ‘These are the people who cook and serve your food. They clean up after you. They want to be able to get a driver’s license. That’s my bill in the legislature.’ ”

When Ilhan Omar ran against Phyllis Kahn, the incumbent who had served 44 years in the legislature, Patricia Torres Ray was the only elected official to endorse her.

Either of these two women would be a great choice for Congress. But we have to pick one. There is a danger if progressives split their votes between Ilhan and Patricia then the centrist Democrat, Margaret Anderson Killeher, could win a plurality. It may only take 40% to win the DFL Primary for Congress, especially if progressives split their 60% between Ilhan and Patricia.

I believe we have to trust and respect the leadership in the DFL and Our Revolution and vote for Ilhan Omar for Congress.

We have to remember and respect the record and leadership of Patricia Torres Ray, but former School Board Member Dave Tilsen also remembers, “In 1987 Particia Torres Ray joined with Tony Scallon and Jeff Spartz to run a slate of candidates for the Minneapolis School Board who dismantled benchmark testing, drove out Superintendent Richard Green, hired Robert Ferrera and brought division and corruption to the board.”