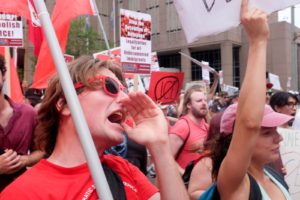 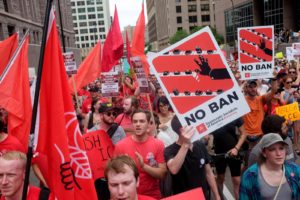 The Poor People’s Campaign (PPC), which began May 14 with an announced 40-day series of actions highlighting all the major causes and intersections of poverty in the U.S., came to a close in mid-June. The last action was the first one to occur in Minneapolis, where the theme was The Beloved Community Means No More Police. A small group of six or so activists entered Mayor Jacob Frey’s office before the action downstairs on the front steps facing the LRT kicked off. Spreading a tarp on the carpet, they emptied bags of black dirt to create a life-sized symbolic grave, representing all the people of color who have been shot and killed by Minneapolis police. Down on the street, the demo proceeded peacefully with lots of lovely songs led by spiritual singer/songwriter Jayanthi Kyle. Local artist and poet Junauda Petrus read her poem “Can We Please Give the Police Departments to the Grandmothers?” Activist and artist Ricardo Levins Morales gave a speech that could be worthy of Dr. King or Malcolm X in its righteous fury combined with intellectual rigor. (I believe Unicorn Riot filmed all this.)

We attended Hennepin County Court as court support on Thursday, July 5, when the #NoMNICE18 arrestees appeared for the first time. MIRAC (MN Immigrant Rights Action Committee), of which about half of the arrestees at the action blocking the LRT at the Whipple Federal Building were members, held a press conference before the hearings to explain their goals and strategy. They were not arraigned, but given a new date—Sept. 27.
In other news, on June 23, Thurman Blevins, a young African-American man known as Jun to friends, was shot and killed near his home in North Minneapolis. Reaction was swift, pointed, and so far, peaceful. On the following day, three actions occurred. It was also the day of the Pride March (yes, it does seem like everything is happening at once) and there was an action planned to protest police at Pride, so the Blevins killing was folded into this action, and the Pride Parade was held up for over an hour. At mid-day there was a mass protest outside of 4th Precinct police HQ, and starting at 7 p.m., neighbors, friends and supporters gathered near Blevins’ home for a vigil. City Council Member Jeremiah Ellison, who was part of the occupation of the 4th Precinct in response to the Jamar Clark killing, called for immediate release of body camera footage, but as of this writing, it has still not been released after nearly a month.

Unless you live in a sealed chamber without internet access, you will have noticed that the president’s “Zero Tolerance” policy on non-citizens (many of them asylum seekers) trying to enter the country, resulted in a couple thousand children being violently separated from their parents at the border with Mexico. Most of these children are still themselves incarcerated in “camps,” jails, or hastily requisitioned shelters, while many have gone to other family members or simply “got lost,” possibly in the hands of traffickers. This quite predictably resulted in a flood of outrage over mainstream and social media that even the administration and most (sadly not all) of their staunch supporters could neither brush off nor find legal or biblical justification for. The national Democratic Socialists of America (DSA) led the way in immediate reactions; the two most effective were a flash mob shaming of DHS chair Kirstjen Nielsen at a Washington, D.C., Mexican restaurant, and an occupation and shutdown of an ICE office in Portland, Ore. The president tried to reverse this bad press by issuing an Executive Order with a kinder, gentler alternative—family-style concentration camps! Thus he provided us in the movement with a perfect litmus test for detecting ill-informed liberals with no analysis of the present horrors; these were the people who “celebrated” this as a “victory” where “Trump was forced to relent.”

On Saturday, June 30, the nation was swept by over 700 separate demonstrations demanding #FamiliesBelongTogether and #AbolishICE, ranging from over 30,000 in Washington, D.C., to about 60 in Onancock, Va.(population less than 1,300). Here in the Twin Cities, a demonstration that began at the Minneapolis Convention Center and wound through downtown to end up at the Government Center drew approximately 7,000 protesters, according to police, and was watched by an equal number of mostly supportive onlookers. Twin Cities DSA led a major socialist contingent with red flags flying and a panorama of signs, some mass- produced and official and many creatively hand-made. We assembled a group of about 200, comprising mostly DSA members, but with a significant number of Socialist Alternative and International Socialist Organization members, at Stevens Square Park a half hour before the main event. We did some last minute prep, including practicing chants (we really ruled the march when it came to chants, I have to say) and then marched en masse to the Convention Center.

On Monday, July 9, Twin Cities DSA held a membership meeting in a room in the Richfield Community Center designed to hold 120. There were 180 in attendance. About a third were members who had just joined in the past two weeks. After the actions alluded to above and the primary win of Alexandria Ocasio Cortez in New York, DSA nationally experienced an incredible membership surge, signing on over 4,000 new dues-paying members in one week, rising to a total of over 44,000. (For perspective, the entire national membership was between 4,500 and 6,000 for decades before 2016.) Here in the Twin Cities, our own surge saw 100 people sign up in just four days and DSA’s local numbers are over 700 now. Also, we have had at least nine DFL candidates (and one DSA member running in a non-partisan local race) —with offices ranging from small town city council to member of the U.S. Congress—approach us asking for endorsement. We heard from seven of these candidates toward the end of the meeting, and we have scheduled an extra meeting for July 29 to consider endorsement of candidates. If you are or represent a candidate interested in DSA endorsement, the deadline to apply is July 25. You can send an email to [email protected] with the subject line Endorsement Request for … and the candidate name.

There is a lot we had to leave out of this RP report, including the first Afternoons with Andrea, where CCM Andrea Jenkins hosted a forum on Minneapolis2040, the Comprehensive Plan, at the Seward Cooperative Friendship Store. See an online-only article on our website for a more in-depth report on that.