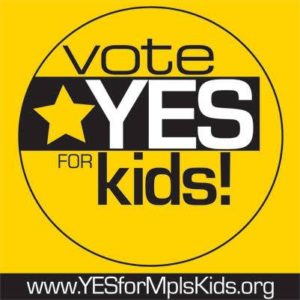 We just had a primary election. For the School Board at-large, we only eliminated one candidate from the ballot, Doug Mann. In November we will have four candidates on the ballot, we can vote for up to two to elect two at-large candidates. We also will have two referenda for school funding on the ballot.

Board Members Jenny Arneson, Siad Ali and Nelson Inz are running unopposed in their district races.

I am urging voters to return Rebecca Gagnon and elect Kimberly Caprini to the Board. I am also strongly urging a yes vote on both of the funding referenda.

Minneapolis, like many urban districts, is in struggle for its identity. In fact, the very shape and even existence of public education as we know it is under discussion. There is an agenda to change it which most observers refer to as the corporate neo-liberal reform agenda.

This agenda involves the creation of quasi-markets in education, a sharp increase in the quantification and measurement of students and teachers, and the conception of public education as a source of great profit for private industry.

As Fabricant and Fine explain in “The Changing Politics of Education,” “In public education, we have witnessed the ascent of charter schools, virtual learning, market curricula development, and an expansive number of firms engaged in the measurement and assessment of teachers, with a host of entrepreneurs making large and small profits. More specifically, profit-making extends from publishers capitalizing on the new standards-based testing curricula, to high-tech companies experimenting and testing their curricula interventions, to real estate operators leasing property to exorbitant fees, to certification programs, and finally for-profit schools. Each of these fragments, pieces of profit-making, are part of a new ‘gold rush’ to capitalize … public assets being redistributed from K-12 public schooling to the marketplace.”

In Minneapolis alone, one of these corporate organizations has announced plans to offer over 25,000 seats in the next decade. This in a district with under 35,000 total students. These are sold as being better for education, better for low-income and under-achieving students. We are told that these schools will be sources of innovation, creativity and excellence, and an alternative to the poor quality of the public schools.

It turns out that this is a lie.

What we have found is corruption, profit-making, over-reliance on suspension and other discipline methods especially towards minority students, and a huge drain on the rest of the school system. This phenomenon is nationwide.

A 2016 study of Chicago’s charter schools by Myron Orfield and Thomas Luce in “Education Policy Analysis Archives” found that by nearly every measure they performed worse than Chicago’s public schools, with the report’s authors explaining: “This study uses comprehensive data for the 2012–13 and 2013–14 school years to show that, after controlling for the mix of students and challenges faced by individual schools, Chicago’s charter schools underperform their traditional counterparts in most measurable ways. Reading and math pass rates, reading and math growth rates, graduation rates, and average ACT scores (in one of the two years) are lower in charters, all else equal, than in traditional neighborhood schools. The results for the two years also imply that the gap between charters and traditionals widened in the second year for most of the measures. The findings are strengthened by the fact that self- selection by parents and students into the charter system biases the results in favor of charter schools.”

I do want to distinguish between the for-profit corporate charter schools and the small parent/educator run schools that have been started to meet specific needs of students. Schools like Southside Family School and Heart of Earth Survival School are two examples. These are not for-profit, and in fact do serve as sources of creative innovation that have helped other schools teach all students better. These kinds of alternative schools are not part of what I am criticizing here.

Rebecca Gagnon has been a strong critic of this reform movement. That is my primary reason for supporting her return to the School Board in spite of the fact that she has angered some in the Teacher’s Union and the DFL. The other three all say that they are not supporters of the reform agenda but we have been fooled in the past and elected people that have done real damage. Josh Pauly and I spoke on the phone and he strongly told me that that the publishing of pro-charter school and other reform articles by the Center for Policy Design where he was a fellow last year, does not reflect his views. Checking out their publications, they are a promoter of the reform movement. This leads me to not want to take the risk with Mr. Pauly. He vociferously disagrees with me.

The School District needs the money to educate the children of our city. The increase in property tax on a home assessed at $250,000 for both referenda would be about $11 per month. I know that more taxes are a tough sell, and schools are one of the only taxes we get to vote on, but we all benefit from an educated populace. We all suffer from ignorance. https://www.yesformplskids.org/

Yes for Mpls Kids www.yesformplskids.org The Yes for Mpls Kids campaign is proudly supported by a growing and broad coalition of parents, elected officials, organizations, and community leaders.