What’s happening at the Y 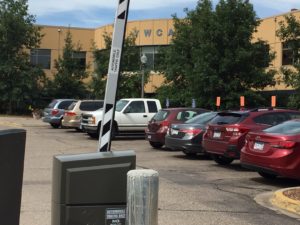 In a letter dated Aug. 3, 2018, Minneapolis YWCA management, without prior consultation with members, decreed that it would impose a pay-to-park system with gates to go into effect in September at the Midtown Y. Parking had always been free at Midtown, one of its attractions. Although the letter was dated Aug. 3, members didn’t receive it until Aug. 17 or later. Construction began shortly after, giving members little time to respond. The letter asserted that only a pay system could block the use of the lot by non-members.

While members support both blocking non-members and installing a gated system, we reject the Y’s version. First, although the $200,000 cost is fixed, the Y imposed a permanent annual $180 parking fee ($15 per month) on members who park in the lot. For members who have to drive, the pay system amounts to a de facto, immediate 20% or so increase in the membership fee.

This revenue stream vastly exceeds what’s required to pay for the system. If we conservatively estimate a 1,000 paying members, each member would need to make a one-time payment of $200. If the expense was paid off over 10 years, members would pay only $20 per year.

Since the Y did not include revenue-raising as a goal, members proposed a fairer means of paying for the gates. For example, members could pay a surcharge of $20 per year until it’s paid off. And that’s just one way of devising a fair payment system. Since money wouldn’t be needed to raise the gates, a system using tokens, cards, secret codes and so on could be used. And the goal of blocking non-members is no less secure than the Y’s bilk-the-members scheme.

Naturally, the Y’s edict aroused member concern. When Midtown member Doris Overby, a senior citizen, went to the Y on Aug. 20 and sought to gather signatures to a letter to be sent to CEO Frías, an unfortunate incident ensued. Two Y employees approached Ms. Overby in such an unfriendly and overbearing manner that—in her words—she felt “hurt, embarrassed, confused, frightened, and defensive.” She was treated disrespectfully—neither official bothered to inquire about her concerns. She was told that she could have read the membership policy. Finally, she was told that any more signature-gathering would have to take place off premises.

These officials asserted that Ms. Overby was violating the Y’s rules on petitioning. However, neither of them cited a specific regulation, and the official Membership Policy, while it prohibits various things, makes no mention whatsoever about signature-gathering—a glaring omission given the treatment meted out to Ms. Overby. We have asked: Where is the policy posted, and how can members get access to it? More than two weeks have elapsed since the incident, and the Y’s managers remain silent.

More troubling, throughout the exchange, neither official bothered to identify themselves. Ms. Overby was suddenly confronted with two officials laying down the law to her—two officials who failed to reference their credentials in exerting their authority. Such an approach strikes us as not only discourteous, but as a breach of elementary professional conduct.

Having become aware of the incident with Ms. Overby, the community has risen to her defense. The following letter from

Harry Davis eloquently captures the support for her.

Postscript:
We urge members to express their opinions to CEO Frías. Specifically, we respectfully request her to hold a forum open to all members, a forum in which she would elaborate on these serious issues, answer members’ questions, and respond to their concerns. The matter of making amends to Ms. Overby should be at the forefront—along with the steps the Y intends to take to avoid a repetition of this incident. Emails to Ms. Frías should be sent to nkettner@ywcampls.org.

Dear Ms. Frias,
As a life-long supporter of the YWCA and YMCA for the last 60 years, I write you today with a heavy heart. I was young boy when I first used the Blaisdell YMCA. As a vehicle of mentorship, active staff people who were role models, and a stable community meeting point for social issues, the YWCA/YMCA is highly respected in the African-American community.

My dear friend Ms. Doris Overby, who sits on many community advocate organizations with me, informed of me an issue with the Midtown YWCA where she is an active member/supporter. I will not question the financial issue Ms. Overby and other members are addressing to you; my concern is the lack of personal respect shown to Ms. Overby.

In the African-American community, I was taught from a very early age of the respect and support we give our women, who are the rock foundation of our community, and the role they played in “trail blazing” social justice and equal opportunity. Therefore, my respect for females who step out on faith to bring attention to the people in charge of social institutions like the YWCA when their community speaks to issues of importance to them. However, those institutions who are “nonprofit” and are there to support all of the community, and do not give the respect to people who question their operation, seem not to be following their charter.

As the son of a legend of social justice and an advocate for change, I have spent my life fighting for the rights and respect of all people, no matter of their social status, wealth, political position, or position in the institutes of power.

I am a fifth generation African-American Minnesotan. My family settled here in 1868.

Ms. Doris Overby is one of the most dedicated advocates for a change in a system that leans to the side of the powerful too many times. The YWCA supports, encourages, empowers and directs young women to reach their full potential. Ms.

Overby is one of those women that young females would be proud to follow.
Once you and the community resolve your parking finance concern, which I feel will come to a reasonable conclusion, I encourage you to address with your staff and Ms. Overby the lack of respect shown to her and show as an example to all of the past, present and future young women that the YWCA is a bright star of mentorship.

Thank you for your service to our community.
Sincerely,
Harry W. Davis, Jr.