CONFESSIONS OF AN UNREPENTANT MAOIST: Back to college 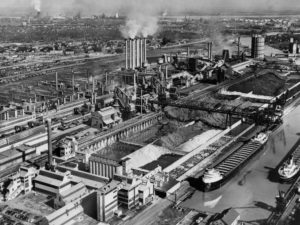 In late winter of 1976 I got a call from Fran Shor, a friend who was teaching at Wayne State University. He said they were hiring faculty for a new program, The Weekend College for Working Adults. It was an adult education program teaching college classes to workers in the Ford plants around Detroit. Students could work full time, meet once a week with a small class, watch hour-long television programs four times a week and have two weekend large conferences twice a semester. They could work full time and be full-time college students, and (since most of them were Vietnam Vets) they could get their tuition paid and a stipend through their G.I. Bill.

I thought it was a dream-come-true: teaching workers at the point of production. Instructors designed their own courses.

I sent my resume, got an interview and got the job.

I rented rooms in my house on Powderhorn Park, packed up my two kids and two cats and moved to Detroit.

The theme for the fall semester was Faust. I was responsible for a lecture at the Weekend Conference and for developing a curriculum for students in my section.

The Faust legend never appealed to me. I thought it was corny. But, then something clicked. I had been reading Friedrich Engels’ “Peasant Wars in Germany,” how Thomas Müntzer had led a peasant revolution that almost succeeded in overthrowing the feudal system in Germany and establishing a utopia described in Acts of the Apostles where all shared equally—from each according to their ability, to each according to their needs. The nobility finally crushed his revolt through trickery and false promises, and it became a capital crime in Germany to even mention his name. Soon after his execution in 1525, puppet shows on market days in small town squares began to tell the story of Faust, a very smart person, who makes a pact with the devil to rule the world. He is damned to hell for his sin of pride. German peasants in the middle of the 16th century knew what happened to Thomas Müntzer and they could see him in the outlines of the Faust story, and they couldn’t help but sympathize with the hapless and doomed idealist, especially when he was accompanied by his comic sidekick, Pickled Herring. Müntzer’s close comrade Pfeiffer was captured by the nobles after hiding under a sink.

Müntzer’s appeal for help: “Help us in any way you can, with men and with cannon, so that we can carry out the commands of God himself in Ezekiel 14, where he says, ‘I will rescue you from those who lord it over you in a tyrannous way… Come, you birds of heaven and devour the flesh of the princes; and you wild beasts drink up the blood of all the bigwigs.’ Daniel says the same thing in chapter 7, that power should be given to the common man.”

It was a thrill to talk with auto workers about Thomas Müntzer and his revolutionary daring.

I helped arrange a community meeting for faculty and students about the worker’s struggles with capital in this culture and invited a friend and fellow Farmer-Laborite from Minneapolis who was also an organizer in the steelworker’s union and a member of the Communist Labor Party.

I had a strong sympathy for the Communist Labor Party. They were one of a hundred political sects and clubs in Detroit. But they were Maoist and they ran people for political office. General Baker was an often candidate for the legislature. He was an imposing black auto worker at the Rouge Plant in Dearborn—where it came in scrap iron and came out a Mustang. The CLP was started by Nelson Peery, who was also black, as a breakaway from the Communist Party. Peery spent time in South Minneapolis growing up, and he writes about how some white teenagers fought with him and some of his friends over turf in Phelps Park on 39th and Chicago. Was it a race war? Kinda. It was at least one of the many unreported racial incidents that formed the consciousness of a future revolutionary.

I ran afoul of my good relations with the Communist Labor Party when the Supreme Court handed down the Bakke Decision in 1978 that held Affirmative Action meant the University of California could use race as a factor in college admissions. I was afraid this would be an effective way to split the working class by convincing whites that blacks were being given special treatment. By 1989 Donald Trump, fanning the flames of racial hatred, could tell Bryant Gumbel, “I would love to be a well-educated black, because I really do believe they have the actual advantage today.”

I liked teaching, and I really liked teaching auto workers about literature and politics, but after two years I was anxious to get home to South Minneapolis. A black woman professor was up for tenure in the spring. She was a bit abrasive but doing important political work teaching black prisoners at Jackson State Prison, creating television courses and publishing local black poets. I organized a support group for her and harassed the Tenure Committee by calling them up while they were discussing her tenure and telling them they could be in violation of Michigan’s open meeting law. I was told shortly after that by my department chair that I would not be reappointed. That made four. I had been terminated from the Department of Rhetoric at the University of Minnesota, Smith College, the University of Minnesota Experimental College and, now, Wayne State University for non-collegiality—I didn’t go along with the administration. But the black professor got tenure.