Who shall rule this American nation? 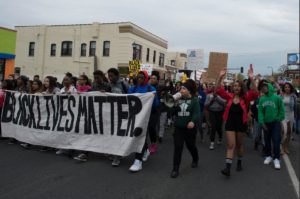 The above is the title and call line of a political ballad of 1866 written by then popular but now largely forgotten composer and lyricist Henry Clay Work. You may be familiar with one or two of his better-received works, either 1865’s triumphant martial air “Marching Through Georgia” (which, growing up in Georgia, I heard of but did not actually hear until I was in my 40s) or his most popular of all, “My Grandfather’s Clock.” When Work wrote this song, the question of national rule broke down to the question of power and rights for white Southerners, Democrats, which we would now distinguish as “Dixiecrats,” who had recently been soundly defeated in a war waged by the radical left of its day, the Republican party. Work was a member of its extreme left-wing, the no-compromise abolitionists, and he was horrified to see that after all the death and destruction, less than a year after the war, the white Southern aristocracy was already confidently asserting its power, as the unfortunate administration of Republican Andrew Johnson slid into incompetence and scandal. What does any of this have to do with education in Minneapolis? Even though the Democrats and Republicans have switched sides a couple of times in the intervening 152 years, in some way the battle lines have never changed. And though the politically simple focus on mainstream media and the White House to deduce who’s in charge and to what end, the more politically subtle know to look at nationwide education policy and their local school board, and to follow the money, of course.

Another way to frame this question, removing the obfuscation of Democrat and Republican and even left and right, is to ask, is this country democratic or capitalist? (As Supreme Court Justice Louis Brandeis is quoted as saying: “We can have great concentrations of wealth in the hands of a few or we can have democracy. We cannot have both.” The concentrations of wealth now far exceed anything Brandeis would have been able to imagine.) Is capital in charge, or are the people in charge? The answer is pretty obvious to me. Now, more than ever, capital is in charge. All of our democratic bells and whistles serve as slight mitigation, now losing ground against the accelerating rate of wealth and wellbeing inequality, and lip service, and window dressing, and distraction. To go from the general to the specific, let’s look at two major problems that continue to bedevil the Minneapolis Public Schools (MPS): the racial achievement gap, and the growing budget deficit. If you think that either of these problems is a matter of Democrats and Republicans locked in battle, with Democrats having the will and means to solve them if it weren’t for the (insert your choice of label) mean, unreasonable, cruel, stupid, reactionary Republicans, you are deluded. For one thing, we’re talking about Minneapolis here, so what Republicans? You may try to say the Republicans in the State Legislature. Yes, they are a problem, but to be fair (and to not have partisan bias-induced amnesia) it was the lame duck DFL governor who vetoed the state budget bill for what some would call petty and vindictive reasons, but everyone can agree were partisan reasons, thus denying school systems everywhere in the state the extra funding they so desperately need. And anyway, you can only feasibly blame Republicans for one of those problems.

The development of the MPS’s racial achievement gap over at least 25 years—which at some point grew to be the worst in the nation—happened entirely under the watch of the DFL. One “perennial” candidate for School Board has charged that, along with other civil rights violations such as in housing, lending and employment, failure to comply, or even to try to comply, with educational civil rights directives never has consequences. These laws are simply not enforced, despite the MPS having an officer and the city having a whole department charged with ensuring compliance. And when I say one candidate points this out, I mean only one. That candidate, Doug Mann, was the only candidate who didn’t make it through the “non-partisan” primary for the two at-large school board seats up for election this year. It’s not a coincidence that he’s also the only candidate who did not seek, and in fact has never sought, DFL endorsement. I suspect enforcement—treating civil rights non-compliance as the crime it is—is just too negative for the DFL. They want to find more “positive” solutions. (Although not the very reasonable solution Mann has consistently urged—better retention of new teachers, so that students in “less desirable” schools do not have to further endure the constant churn and over-exposure to inexperienced teachers.) Some of these solutions have made a dent, some have not. But then we find you can use the fact that some policy you want to change—say, support for magnet schools—that’s also not affecting the racial achievement gap, can be targeted for elimination even though its purpose was something other than eliminating the achievement gap (and indeed, the magnet school program dates from before the achievement gap became so large as to be embarrassingly apparent). Magnet schools are widely expected to be a casualty of the new push for “community schools,” with some of their more popular programs being retained under the new name of “coordinated uniqueness.” For more on the recent struggles, pitting magnet schools against community schools, Superintendent Ed Graff against the rather dysfunctional status quo, and the need for what Graff calls “accountability” while School Board Member Rebecca Gagnon calls it “top-down” governance, see Sarah Lahm’s last post on her blog “Bright Lights, Small City” entitled “Coordinated Uniqueness Comes for the Minneapolis Public Schools,” July 2018. (Lahm is now doing most of her writing for a section of the online progressive magazine called Public School Shakedown.)

Funding is a pretty bleak picture for Minneapolis right now. The budget shortfall this year is currently at $33 million, This is why it’s so important to vote yes for both referenda on school funding. Not only did the board have to dip into capital and emergency funds to create any semblance of a budget for 2018-19, but a couple of serious staffing shortfalls have already caused real pain for students, families and staff. An incident in the first week of school where a 5-year-old student didn’t get off the bus where her mother went to meet her, and was “lost in the system” until late that night, was blamed on the low staffing levels of bus drivers, which in any case is meaning longer rides and later hours for everyone. And special education is really in a bind; the special education teachers are “only” short by less than 10, but the special education paraprofessionals, who are equally vital to the program, are at critically low numbers. By way of appreciating the magnitude of need, special education students make up a huge, and rising, 18% of the Minneapolis public school population, with over 6,000 special needs students.

Despite all these worries, despite a rather lackluster School Board, and despite the pressures of poverty, homelessness and other ills of late-stage capitalism, the MPS does manage to achieve a few good things. See Superintendent Graff’s August “State of the Schools” address at http://www.mpls.k12.mn.us/sots for the high points, including the farm to schools food program, the safe routes to school program encouraging walking and biking, the new accountability measures, and the initiatives to improve “cultural humility,” a deeper version of cultural competency. Be sure and vote, either early (like now) or on Nov. 6, and vote Yes for both funding questions, to give Minneapolis schools some resources to meet its many challenges.