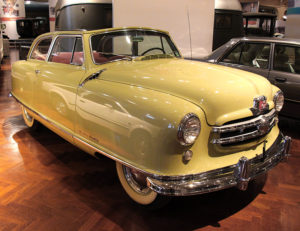 I loved the façade on the Modern Cleaners building ever since I first saw it as a small child looking out the window of a Chicago Avenue bus. It seemed so sleek, so smooth, so modern.

The architectural style is Streamline Moderne, a final flourish of Art Deco, popular in Europe in the 1930s and ’40s. The most widely known example of the style in America is the Nash Rambler from the 1940s and ’50s.

The building started out in 1905 as a butcher shop run by the Skoglund brothers, and the apartment upstairs was where they lived. Someone bought it in the 1930s, made it into a dry cleaning factory and added a first-floor addition on the side and back. Soon after, around 1940, they built the Art Deco, Streamline Moderne façade. It remained Modern Cleaners from the ’40s until I bought it in 1978. Also, around this period, in 1936, Charlie Chaplin released “Modern Times,” the last screen appearance of his character The Little Tramp, trying to fit into contemporary industrial society. The very huge Modern sign seemed to insist that we use Modern in the name of the new building, so it became Modern Times. 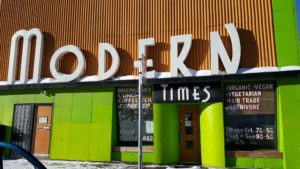 I wanted Modern Times to be a neighborhood hangout, someplace where people from the neighborhood could meet their friends. Powderhorn and Central were going through hard times. Gangs like the Vice Lords and the Latin Kings were trying to establish beachheads. I thought a restaurant would be a good place for people to get together and discuss neighborhood problems. I especially wanted to be open evenings because I believed traffic in the evenings would make the streets safer.

One office upstairs was home to the Farmer Labor Association. Mark Dayton had given the FLA $3,000, and we used that money to hire an organizer. We were able to compile mailing lists and keep members informed.

The other three offices on the second floor and the common area were used by The Loft. The Loft began out of Marly Rusoff’s bookstore in Dinkytown. She and Phebe Hanson, Jim Moore and Trish Hampl began a journal-writing workshop that developed into readings and special events and eventually into a full curriculum for aspiring writers and a permanent location at 1011 Washington Ave.

I thought the building was beautiful. The banks thought it should be torn down, and they refused to lend me money on it. I thought it would take a few weeks of cleaning and painting and we’d be ready to open. It took 13 months, every penny I had, and I had to borrow thousands from friends and family.

Chris McGiffert (an old friend and former housemate) and I would start every morning to tackle the building. It was literally falling apart. We had to build columns and beams in the basement to hold up the first floor, then put in a new column and bearing beam on the first floor to hold up the second floor.

We had to pour almost a truckload of cement to fill a sub-basement.

We spent most of the summer re-bricking the north wall. Because it had been a dry cleaning plant and used steam cleaning machinery, it didn’t need a furnace to heat the building, but then, every night, when the temperature dropped below freezing, the steam in the walls would freeze and push out the bricks. We couldn’t just tuckpoint the bricks. We had to take out each brick and rebuild the entire second floor north exterior wall.

We tried to do most of the electrical work until we got busted by a city inspector and had to hire a professional electrician.

Bowler Plumbing let us do most of the plumbing and heating while they advised and took out the permits. A friend lent us his credit card to buy a furnace. I bought radiators at a salvage warehouse, but (because I knew nothing about radiators and heating) half the radiators I bought were steam and not hot water, so we couldn’t use them.

I installed the handicap handrail upside down and had to redo it.

We had to jack up the building because without the columns and bearing beams it had started to sag. Chris and I would go down to the basement first thing in the morning; smoke a little Attitude Adjustment; get ourselves very paranoid, and then jack up the building. We’d go about an inch and a half, consider ourselves Courageous Heroes, and then reset all the support columns. A friend who knew more about buildings than we did, came by one morning and followed the smell of something familiar down to the basement and asked what we were doing.

We said proudly, “We’re jacking up the building.”

We said about another foot. He took the jack and started pumping the handle. We heard creaking sounds. We were sure the building would now crash around us. He jacked the building up about a foot.

What are you doing, I asked? How could you be sure the building wouldn’t collapse?
“I had faith in all those nails,” he said.

Finally, on July 28, 1979, in spite of everything, Modern Times Café opened for business.