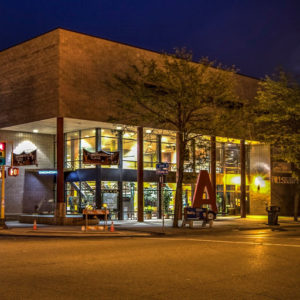 Sunday night, Dec. 9, I went out into the cold dark night to witness wonderful collaborations—people creating art moments together—at Pillsbury House Theatre, 35th and Chicago. Children in the after-school program there had paired up with professional volunteer performers, playwrights and directors to create the little 10-minute scenes that filled the stage. They’d been working together since MEA weekend, in October. The results were seven quite wild, kinetic vignettes based on the theme the children had picked this year: “The Ball is in Your Court.”

It was the annual performance of the Chicago Avenue Project, which has been going on since 1996!! Somehow it got on my radar this year and since I rarely get to things that are planned in advance this was perfect since you don’t have to buy tickets or reserve a seat. You can just go. So at 6:40 p.m. I said “Yes or No?” Yes, I finally decided, and what with bundling up and finding parking I of course got there late, but not too late to see at least half of a story about the budding relationship between a tree and a unicorn. Lots of laughs and pretty sweet. The auditorium was completely packed. Standing room only.

I was so glad I went. Sadly, there were only three performances altogether so it’s over for 2018. But I’ll watch for it next year and I hope everybody in the neighborhood does too. My recommendation is to get there early.

Another play depicted a friendship experiment between a rapper and a wolf. Another story involved the world’s longest beard and a scissor-happy pair of scissors. Not all characters were necessarily people or animals. Try a vacuum cleaner or a piece of paper. The settings went from jungles to living rooms to outer space. There were all kinds of sound effects, costumes and props. Two adult volunteers played a keyboard and provided speaking voices that came through the loudspeakers.

After each play, the young playwright and the adult actors/dancers/singers took a bow together. The kids who generated the stories were mainly between 8 and 10 and maybe a couple were older, the after-school program director told me. Lucky kids. They really had a chance to express themselves. It didn’t seem like they were pushed into adult logic, and were supported in whatever leaps their imagination took them. Kudos to their playwright mentors, Marvin Gonzalez, Shannon TL Kearns, Casey Llewellyn, Michael Rogers, Max Sparber, AnaSofía Villanueva, Sofya Levitsky-Weitz and Emily Zimmer.

According to its publicity flyer: “Since 1996, the Chicago Avenue Project has brought together the Twin Cities’ best adult playwrights, actors, and directors who volunteer to work one-on-one with neighborhood youth on the creation and production of an original play. The Chicago Avenue Project gives every child—regardless of their circumstances—the opportunity to discover that he or she has a lot of value to offer. The project is not about teaching youth to perform, though they do learn acting, nor is it about teaching them how to write plays, though they learn that as well.”

I’ve always felt at home at Pillsbury House because my first job in Minneapolis, in 1981, was there, playing piano for a community theater production by the Real Community Theatre, directed by Judy Cooper Lyle. After that I did quite a few shows with the same company at Pillsbury House and elsewhere. The talent of the kids from the neighborhood was astounding. Also, in the summer of 1983 I had a job with Pillsbury House’s Homemaker program where I went out to the homes of elderly people or people with disabilities and helped them with any chores they couldn’t manage, from cleaning under the claw-footed bathtubs to tackling rooms full of cobwebs.

In more recent years I’ve seen numerous profoundly humane and insightful works of theater at the Pilllsbury House Theatre. Through its Mainstage series, Chicago Avenue Project, Naked Stages, and the Power of Our Voices teen ensemble, it does a lot to foster a strong community with its affordable, adventurous theater productions.

The theater describes itself like this: “Now in its 27th season, Pillsbury House Theatre is proud to be a professional theatre unlike any other. An enterprise of Pillsbury United Communities, one of the largest human services organizations in the state, Pillsbury House Theatre demonstrates that the highest quality art is an integral part of all healthy communities, winning awards for theater across the metro while also inspiring choice, change and connection through raw, intimate drama.”