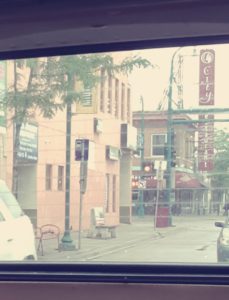 I was walking south on Bloomington Avenue, on the east side of the street, about 5 p.m., on Saturday, Oct. 27. As I crossed the Midtown Greenway, an African-American man about 30 years old was standing on the southeast corner of the intersection. He had tattoos on his neck down to his T-shirt. As I passed he said, “I’ve got rocks, I’ve got rocks.” I told him that I was a journalist and was working on a story about street life in the area, and I asked him if he would be willing to talk to me. He said, “You know people out here who are involved with this stuff are in it for what we can get. Why would I talk to you, unless there was something in it for me?” I then asked him if he knew of any women who might be willing to talk to me. He responded in a slightly hostile tone, “Why should we do something that is going to benefit you without getting something back.”

When I got to the corner of Lake and Bloomington I stopped in at a Mexican restaurant on the northwest corner of the intersection. It is called Taqueria & Birrieria, Las Cuatro Milpas. When a man approached from behind the counter I asked if he was the manager. I told him what I was doing and I asked if there were still prostitutes out on the street this time of year. He said yes. They come in often to use the bathroom, but they are usually polite and don’t cause any problems beyond the increased traffic and the increased use of the bathroom, which, from the sound of his voice and his expression, was a minor irritation to him. I asked him if they are here all winter long and he indicated they were. I asked his name and if it was OK to quote him. He said it was, so I asked for his name. He gave me his business card, which said his name was Hector.

I then walked across the street to the Mercado Central, on the southwest of the intersection. When I walked past a restaurant in that building I noticed a female police officer sitting down at a table by herself. I decided to go in to see if I could talk to her. When I approached her table I said, “Can I ask you a question?” To my surprise she seemed friendly and said that would be OK. As I was approaching her I noticed that my hands were behind my back. Thinking that that could be perceived as a threat I put my hands where she could see them, but she did not seem to be concerned about it either way. I asked if I could sit down and she agreed. I told her what I was doing and then asked her if prostitutes still work the streets this time of year. She said they do all year long. I also asked her if the massage parlors were still operating on Lake Street. She said most of them had been closed down, but there were still some left. I asked her if they were still conducting prostitution there, and she said, “I assume they are,” but she apparently did not have knowledge of that personally.

On the way out I talked to a woman working at a food counter of a Mexican food vendor near the entrance at Lake and Bloomington. She appeared to be Latina, but unlike some of the other people working in that building, she spoke fluent English. She said she was not the manager but agreed to talk to me anyway after I told her what I was doing. She said that the prostitutes would be out there all winter. She said there were many more this year than last year, but they did not cause any problems. I was surprised when she said she is friendly to them and even gives some of them free burritos. I asked if she would be willing to ask any of them if they would talk to me, but she declined and said, “I don’t want any trouble.”

On Sunday, Oct. 28, I walked back to where I saw the man selling crack the day before. About halfway down the block I saw a group of about seven people in front of a house. Some were sitting on a ledge, but most were standing. Most of them appeared to be African-American men, but there was at least one woman and another person dressed as a woman, but whom I assumed was a man.

As I was approaching, a man from the group, who appeared to also be about 30, began to walk toward me. When he got closer he said, “Are you good?” When I didn’t respond immediately, he repeated, “Are you good?” I explained I was a journalist and I was doing a story about street life on Lake Street near Bloomington. He said he wasn’t interested.

When I came back to the intersection on Lake and Bloomington I saw the woman and the cross dresser who were in the group I saw earlier. They were stopped near the bus stop. When the cross dresser stepped away from the woman I approached her. I explained to her what I was doing and I said, “Would you like to have your story told?” She didn’t sound too interested.